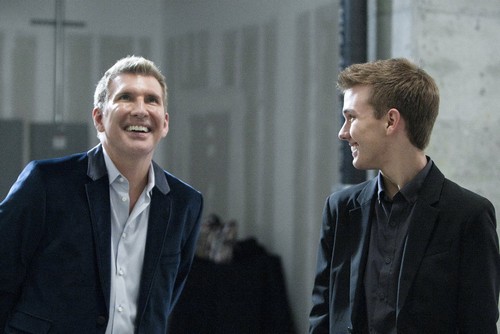 On last week’s episode  the Chrisley’s welcomed a new addition to the family—Baby Chloe. Chloe was Kyle’s daughter, and she was coming to live with Todd and Julie while they teach Kyle “Parenting 101.” In the meantime, Savannah and Chase got into a fender bender in Savannah’s brand new car. Thick as thieves, they schemed to hide from their parents the real cause of the accident.  Did you watch last week’s episode?  We did and we recapped it right here for you.

On tonight’s episode the Chrisley’s are off to their South Carolina lake house in celebration of Todd’s mother, Faye’s, birthday. To his kids’ dismay, Todd confiscates all electronic devices to ensure a weekend of real family bonding. While Julie scrambles to pull off Faye’s surprise party, the Chrisley kids fume over the loss of their gadgets.

On tonight’s episode of Chrisley Knows Best, the Chrisley family is headed to the lake for the weekend, and Todd has declared it “device free” family time. He plans to take all of the kids’ phones and computers. Todd, Julie, Faye, Catherine, and all of the Chrisley kids pack up and head to the lake house.

When The Chrisley family arrives at the lake house Todd takes everyone’s phones. Savannah and Chase take it especially hard. Even six year old Grayson has to hand over his Ipad. Julie tries to reason with the kids, and offers to play board games with them, they don’t want to hear it.

Todd and Julie head outside, so Chase and Savannah search the entire lake-house for their phones. They find the phones hidden in the laundry room, and Chase tries to leave the house with his hone. Todd chases after him and takes his phone back and hides it in a new spot.
The next day Todd takes the kids out on the boat, Julie stays behind to get Todd’s Mom Faye’s surprise birthday party together.

eanwhile out on the lake Todd is discussing how peaceful it is without their cell phones. Little does he know Chase is sitting behind texting his friends on the phone he re-stole from his Dad.

Julie is freaking out, Faye’s party kicks off in an hour and a half, and she arrives at the venue and learns that she has to actually decorate it herself. She begins running around like a chicken with her head cut off trying to get the dinner party together.

Back on the boat, the kids are all swimming in the lake. Todd finds Chase’s phone and is furious. He tells Chase that he missed a few text messages and then throws his I-Phone overboard into the lake.

Julie and her family are trying to set up all of the food for Faye’s party, and almost sixty elderly guests have arrived. They manage to get all of the decorations up and the chairs set up, just as Todd arrives with Faye and Catherine. Faye is completely surprised when they walk into her party and all of her friends and family are there to surprise her. The party goes off without a hitch, and Faye blows out her candles. After they eat dinner Chase steps outside with Todd and apologizes to him for disrespecting him and taking his phone back, he tells his Dad he gets why he took their phones and he has enjoyed spending quality time with the family disconnected from the outside world.