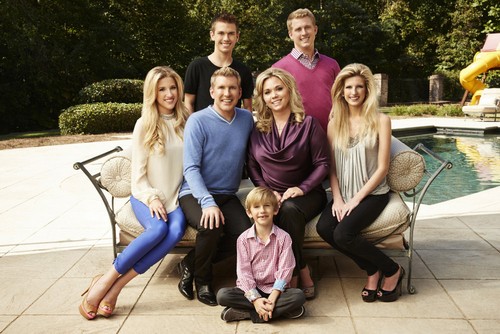 On last week’s episode Todd’s eldest daughter Lindsie broke his heart when she eloped with her now-husband, Will, without telling her family. Ever since then, it had been a struggle for Todd and his son-in-law to see eye-to-eye because they are complete opposites. While Lindsie recovered from plastic surgery, Todd and Will made an effort to find some common ground at the most unexpected place—a shooting range.   Did you watch last week’s episode?  We did and we recapped it right here for you.

On tonight’s episode the Chrisley’s welcome a new addition to the family—Baby Chloe. Chloe is Kyle’s daughter, and she is coming to live with Todd and Julie while they teach Kyle “Parenting 101.” In the meantime, Savannah and Chase get into a fender bender in Savannah’s brand new car. Thick as thieves, they scheme to hide from their parents the real cause of the accident.

Tonight’s episode is going to be filled with drama and you won’t want to miss it, so be sure to tune in for our live coverage of the show tonight at 10 PM EST! While youwait for our recap hit the comments and let us know what you thought of “Chrisley Knows Best” season 1!

Tonight’s episode of Chrisley Knows Best kicks off with Todd making his son Kyle pee in a cup in the bathroom so that they can drug-test him.

The next day Todd heads out on the road with his 16 year old daughter Savannah.  She already has her drivers’ license, but Todd is teaching her how to parallel park with orange rubber cones, which she ran over multiple times.

Julie heads over to Todd’s Mom Faye’s house, to visit her oldest son Kyle.  Todd’s son Kyle lives with his 70 year old Grandma and her 90 year old friend.  He loves it, he doesn’t want to leave.  Julie and Todd want him to get his life together so that he can start taking care of his daughter Chloe, who he never sees.

Chase is him babysitting his little brother Grayson.  Grayson has a bucket list, before he dies he wants to accomplish two things – get floor seats at a Knicks game and go sky-diving.

Todd takes Kyle to the park and reveals to him that he has spoken to his baby-mama and she has agreed to give Todd and Kyle joint custody of their daughter Chloe.  Kyle is overjoyed that he is going to be a part of his daughter’s life, and he reassures his Dad that he is going to stay clean and only go to the strip-club one night a week.

Meanwhile Savannah is having a meltdown, she backed into a parked car in a parking lot.  She and Chase make up a story and tell their parents that someone backed into her car while they were in the store, and then drove off.

Todd and Julie arrive with Kyle and Baby Chloe.  They check out Savannah’s car, and Todd tells her that she is going to have to pay for the car – she didn’t have permission to even leave the house, it is her problem that she had an accident.

Todd sits down with Kyle and lectures him about how much work it is going to be for him to take care of his daughter, and tells him he has a “life time of responsibility now.”  He wants Kyle to move out of his Grandma’s house and get his own apartment within the next six months.

Todd and Kyle pack up Chloe and head to a “Mommy and Me” class.  Todd is proud that Kyle took the initiative and come to class.  Savannah and Chase make a surprise visit at Mommy and Me class.  Todd is suspicious, he knows they are up to something, he reminds them that showing up at class is not going to make him forget about the car.

Later that night, Julie and Todd call Savannah and Chase into their bedroom.  Todd went to the store and talked to the owner and found out that Savannah lied about her accident, and he found out that Chase tried to pay the lady she backed into cash so that she wouldn’t call the police.  Todd and Julie decide that as their punishment they both have to pay for the car damages, and now they have to pay their own car insurance.