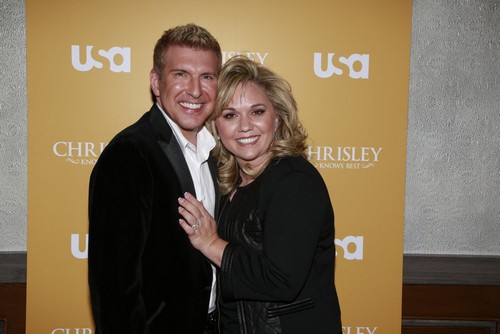 On last week’s episode the Chrisleys took Manhattan! Todd took Savannah and Chase to New York City to teach them about the family fashion business. Savannah proved to be a perfect student, but the only thing Chase learned was how to pick up models. Back in Atlanta, Julie vowed to lead a healthier life, but only after she had a few cocktails with the girls.  Did you watch last week’s episode?  We did and we have a full and detailed recap, right here for you.

On tonight’s episode the Chrisley kids show their love for their parents by treating them to a special day of pampering and a romantic dinner. But planning isn’t the kids’ strong suit. What starts off with good intentions ends up in a comedy of errors.

Tonight’s episode of Chrisley Knows Best kicks off with Todd and Chase prank calling his Mom. Todd called his Mom and said he couldn’t get a hold of Chase. So, Chase called his Grandma on his cell phone and told her that he was sneaking away from a girl’s house and rear-ended a car and the drove off. Todd’s Mom tells him he is going to jail and hangs up on him.

At dinner all of the Chrisley kids sit down and have dinner with Todd and Julie. They have planned a surprise for their parents, and want to treat them. Todd and Julie beg to know what the surprise is but the kids are tight-lipped.

Kyle heads home to his Grandma Faye’s house and helps her look for a companion on Christian Mingle.

The next day Todd receives a phone call and learns that the retail space he has been bidding on for his store has fallen through and now he has merchandise on the way and no place to put it. He is annoyed but Julie says they have to play along with the kids’ surprise.

Chase has dressed up as their chauffer and they usher their parents into their Range Rover. After getting lost and screaming at his sister Savannah at the phone he finally drops them off at the massage parlor. Afterwards the hostess tells them that they have to pay the bill, Todd is furious because the kids said they were footing the bill. Afterwards Chase picks them up from the massage parlor and drops them off at Little Italy for a dinner date. Once they sit down Julie gives Todd a pep talk about finding a retail space for their store, since he has been down all day about losing the store space. Todd is thrilled when they leave the restaurant and find out that the kids actually paid that bill for them.

After their dinner date they decide to stop at a coffee shop to pick up a pastries to surprise the kids since they planned a whole special day for them. As they are leaving they run into Todd’s Mom, Grandma Faye having a coffee date with someone she met on Christian Mingle. Faye introduces her date to Todd and Julie and invites them to sit down. Todd takes his Mom into the shop and scolds her and tells her that she “can’t be meeting strangers offline.”

Todd and Julie finally arrive home after their long day and they thank Savannah and Chase for planning their day for them and chauffeuring them. They’re exhausted and head to bed. Before he goes to sleep he calls his Mom Faye and makes sure that she didn’t bring home any strangers with her.

The next day Todd receives a phone call from his real estate agent and learns that he has secured a retail space for his store. Todd rushes outside and tells his family the good news and announces he can “now sleep at night.