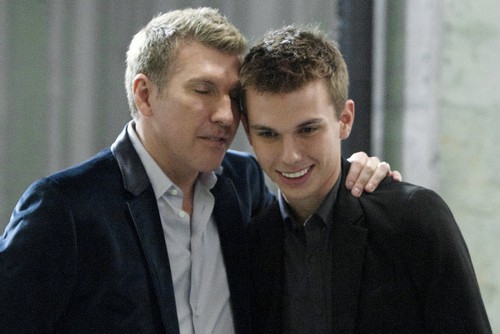 On last week’s episode the Chrisley’s were off to their South Carolina lake house in celebration of Todd’s mother, Faye’s, birthday. To his kids’ dismay, Todd confiscated all electronic devices to ensure a weekend of real family bonding. While Julie scrambled to pull off Faye’s surprise party, the Chrisley kids fumed over the loss of their gadgets.  Did you watch last week’s episode?  We did and we have a full and detailed recap, right here for you.

On tonight’s episode the Chrisleys take Manhattan! Todd takes Savannah and Chase to New York City to teach them about the family fashion business. Savannah proves to be a perfect student, but the only thing Chase learns is how to pick up models. Back in Atlanta, Julie vows to lead a healthier life, but only after she has a few cocktails with the girls.

Tonight’s episode of Chrisley Knows Best begins with Julie and Graysonat a candy store, buying bags of candy.  Julie tells Grayson that he can’t tell his Dad that they went candy shopping, Todd wants her to watch what she eats, but candy is Julie’s vice.  She tells Grayson that if Todd asks where all of the candy comes from, he has to lie and say a hippy gave it to them.  Later that day Todd lectures Julie about eating right and exercising, in 2012 Julie was diagnosed with breast cancer.  She beat the cancer, but now Todd is paranoid that it will come back if she doesn’t take care of herself.

Todd packs his bags and takes Savannah and Chase with him to New York City.  When they arrive at the hotel Todd’s OCD kicks in.  He calls the front desk and has them send housekeeping up to change his sheets.  They tell Todd that the bed was just cleaned, but Todd insists that he wants to actually see the hotel staff put new sheets on the bed.

The Chrisleys aren’t in New York for play though, Todd is opening his own lifestyle store and he is headed to NYC to pick out clothes to carry in his department store.  The only reason Chase agreed to come along was so that he could check out the models trying on their new clothing line.

Back in Georgia Julie has decided to take Todd’s advice and get some exercise.  She heads to a poll dancing class, and learns how to twerk and dance “sexalicious.”

It’s day #2 in New York City, Todd, Chase, and Savannah head to their second showroom and Todd is proud of how serious and well-behaved Chase is.  After the showroom Todd drops Case and Savannah off at the hotel and heads to a business meeting.  Before he leaves he specifically tells them not to leave the hotel.  When he returns, he learns that Chase disobeyed him…and left the hotel.

Chase returns and Todd curses him out for leaving the hotel.  Chase tells Todd that he is “smothering him,” and he “needs to relax.”  He packs his suitcase and storms out of the hotel and says he is going home.  Todd chases after him and apologizes to him in the middle of the street, he admits that he has been pulling the reigns a little tight and convinces him to come back inside the hotel.

Todd, Savannah, and Chase head back to Atlanta.  Julie surprises them with a healthy meal.  Todd isn’t impressed with the thought of having tofu for dinner, but Julie jokes that she isn’t a short order cook, and if he wants her to eat healthy then they are all going to eat healthy.  After dinner they all head to bed, and Julie shows Todd some of her new pole-dancing skills.