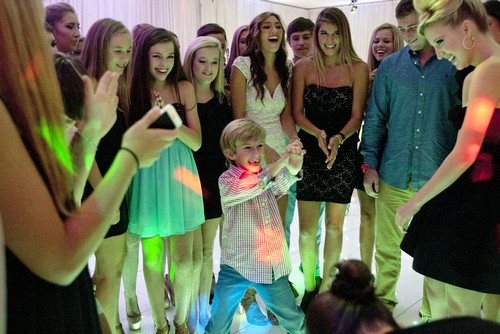 On last week’s episode the Chrisley kids showed their love for their parents by treating them to a special day of pampering and a romantic dinner. But planning isn’t the kids’ strong suit. What starts off with good intentions ended up in a comedy of errors.  Did you watch last week’s episode?  We did and we have a full and detailed recap, right here for you.

On tonight’s episode Todd’s granddaughter Chloe is turning 1! In true Todd fashion, he bets Julie he can throw just as fabulous a birthday party for Chloe as she could. The bet is on, but Todd has to do it all on his own. He soon realizes that planning cupcakes and a petting zoo is not as easy as Julie makes it look.

Tonight’s episode starts with Todd challenging Julie over the planning of granddaughter Chloe’s one-year birthday party. Todd started the party-war by disagreeing with Julie over the size and scope of the party. Todd wants big and amazing, while Julie counters that since Chloe is only turning one, it doesn’t have to be so over the top. Typical Todd had to one-up Julie and promise to handle the planning of the party with ease….and with no help from a party planner! While Julie doesn’t believe Todd can make good on his promise to pull the party off without a hitch, he confidently tells her he can handle it. Let the party planning begin!

While on the road, Todd calls Faye and asks for help with making a cake. Hilarious banter between Todd and Chase on the car ride. First, Chase makes some recommendations on the cake based on the fact that Chloe has only two teeth. Todd responds by yelling that there are going to be more people at the party besides Chloe! Then, Todd is bothered when Chase needs to use his GPS in his own hometown to which Chase replies, “I don’t know where the grocery store is.” They head into the supermarket, but Chase takes Todd to a health food store. Todd is completely annoyed. While Todd is stressing over what to buy, Chase finds him an herbal tea laxative! Todd calls Tanya with a plea for help.

Todd instructs Tanya to get Chloe a petting zoo, bounce house, the cakes and all. Savannah calls Todd to let him know she was just pulled over…but it was his fault! She said she was rushing because he told her she needed to hurry up to pick up supplies. Savannah displays the yellow balloons she purchased. The only problem? The party color is pink! Julie gets home and hits the roof over Savannah’s ticket. Todd shares that she was driving 20 miles per hour over the speed limit!

Julie and Kyle are at Faye’s house with Chloe. Todd walks in boasting about the extravagant party he is planning for Chloe. Kyle tells Todd he wants to be able to help. Todd is under extra pressure to come through because part of his bet means that he must win..or he buys Julie a new piece of jewelry.

Todd calls Tanya the morning of the party. Todd is frantic but feels much better after hearing the good news that she has secured everything for the party. He can rest easy..except for the fact that it is currently raining. Shortly after his call, he listens in on Julie’s conversation with Savannah about her speeding ticket. Savannah gets her driving privileges taken away by mom for six months, but she takes it well.

Later, as the boys are taking care of last minute decorations, they choose to play around instead of work and use the helium to make each other laugh with their high-pitched voices. More hilarity as the cake is delivered but the decoration on top of Chloe’s cupcake falls off. Savannah comes down and sees the situation and tells Todd that they just need to add more frosting to fix it. Todd responds with the question of where the heck he will get the extra frosting from as he doesn’t happen to have frosting lying around the house. Next, Chase comments on Chloe not being able to eat the cake anyway because of allergies to which Todd responds, “Chase, if you say one more dumb thing, you are not coming to the party!” He gets super stressed over the cupcake, but is relieved once it is fixed. That is until they spill the juice everywhere. Despite the rain, the party seems to be a hit.

Later, Savannah comes down all dolled up in a princess dress and tiara to act as the princess for photos while also doubling as the face-painter. She comes down trying to be all glam and asks Todd if he would like a pic with her. Todd responds with an “No thanks, I’m good.” Shortly after Savannah starts face painting, Chase chimes in about the horrible job she’s doing, noting that she made grandma Faye look like she passed out in a frat house.

Kyle came up to personally thank Todd for putting the party together. Todd gives a speech about how hard he’s worked and everyone who helped rolls their eyes. Everyone watches on as Chloe enjoys her birthday cake. The family is enjoying the party and time together. At the end of the night, Julie and Todd are in bed talking about the fact that Todd won the bet, but he shares that he bought her a ring anyway. The ring is to thank his wife for all the years and hard work she’s done. Then he admits that he did have a little help. Just as they kiss, they hear Grayson giggling as he is hiding by the loveseat. He jumps in bed with them and the rest of the family joins them. They all say goodnight…and “I love you.” What was your favorite part about tonight’s episode? Tell us below!