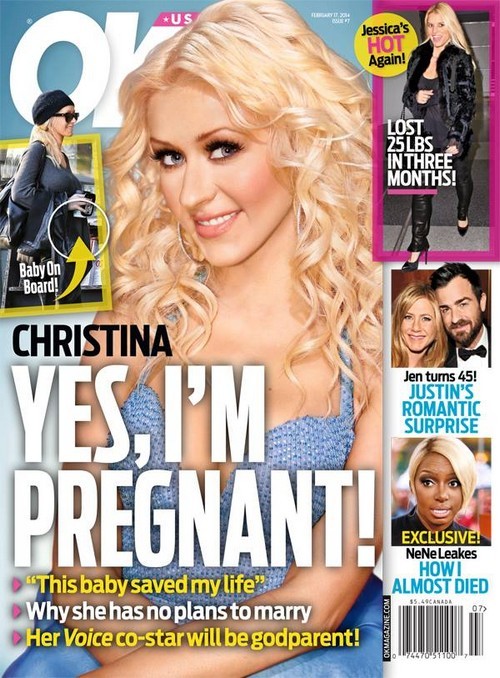 According to the latest cover issue of OK! Magazine, Christina Aguilera is pregnant again. And not only is she pregnant again, but she apparently has no plans to marry her current boyfriend. It’s not clear whether Christina gave some sort of interview to OK!, because they’re crediting her with all sorts of quotes. They claim that Christina said that ‘this baby saved my life‘, and that her Voice co-star will be her child’s godparent.

Considering that Christina just lost a massive ton of weight, it’s kind of surprising that the tabloids are calling her pregnant. It’s possible that she actually is pregnant, but with the tabloids’ track record, that’s extremely unlikely.

Anyway, Christina already has one child with ex-husband Jordan Bratman, and this would be her second child. It’s been stated for a while that Christina and boyfriend Matthew Rutler were thinking of starting a family together, so we know that she’s not necessarily against getting pregnant again. But marriage? Well, the report says no, but we’ll just have to wait and see, won’t we?

OK! also has a feature on Jessica Simpson‘s 25 pound weight loss in the past three months, with the disgusting headline, ‘Jessica’s Hot Again’. Ughh, tabloids. So damn sexist and clueless at the same time.

Jennifer Aniston‘s 45th birthday is also coming up, and Justin Theroux reportedly has a romantic surprise planned for her. Who bet that these two would last this long? Come on now, fess up.

Finally, NeNe Leakes discusses how she almost died from her health issues, and urges everyone to be vigilant about their own health.