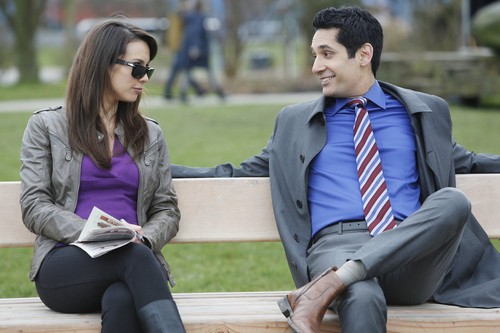 On last week’s episode Kiera, without much help from Carlos, pursued a group of brilliant students who were using cutting-edge technology to commit crimes; at the same time, she was pursued by a handsome amnesiac who wanted her help piecing together his mysterious past. Elsewhere, Kellog found a way to get back into Alec’s good graces, while Alec went to dangerous lengths to perfect his new invention.  Did you watch last week’s episode?  If you missed it we have a full and detailed recap, right here for you

On tonight’s episode a shocking discovery is made by Kiera, whose connection with the mysterious John Doe grows deeper, at the same, her relationship with the Freelancers is being pushed to the limit. Meanwhile, Alec crosses the Rubicon to protect his legacy.

Continuum season 3 episode 10 airs at 10PM on SYFY and we will be live blogging it with all the up-to-the-minute details. So make sure to come back to this spot and spend the evening with us! Make sure to refresh often to get the most current details and updates!

Alec stole Kiera’s body and he’s using it to in a get rich quick scheme?!?! Well, we always wonder what it would take for the present Alec to start looking like his future self – greedy and exploitative – and it seems all it took was Alec finding the greatest excuse to betray his friends.

He hadn’t forgiven her for lying to him like the way his ex-girlfriend lied to him or how he was to lied to about his father. So using his righteous anger as justification – he stole the other Kiera’s body and used it to adapt his pet project “Halo”. But without Kiera, he’s a bit low on friends and that’s why he turned to Jason and, though he doesn’t know it, Jason happens to be a corporate spy. And he’s about to do his actual job one better by offering to be Alec’s guinea pig for the Halo project.

In the meantime, Carlos found out about the body snatching. He wanted to confront Alex straightaway but work called and he didn’t have the time to add a personal visit on top of his many phone threats. Not that Alex took those seriously anyways. By the time he got around to calling Carlos back – he made up some lie. He told Carlos he was arranging a proper send-off for Kiera and that’s why he stole the body.

Carlos and Kiera need to figure out where Liber8 will hit next and thankfully someone remembered some of her history lessons. Kiera realized one of the corporations that will go on to create a monopoly on medical treatment was currently just breaking major ground in the battle against Alzheimer’s. So she and Carlos went to investigate.

However, they wound up alerting Liber8 to their actions. They didn’t know that the secret organization was already onto the company nor did they guess that their lackey on the inside just happened to be Inspector Dillon’s daughter. He secretly sent her in undercover and his team wasn’t alerted to this fact until the very last minute.

Now the detectives believe the girl is either in grave danger or she’s helping Liber8 on their next assignment. As for the girl herself, she’s more embedded into the terrorist cell than they could have imagined.

Christine was there when Sonya met up with Julian. Seeing him become Theseus was a rare sight and not exactly permitted to the masses. So she’s not really starting out on the ground floor if she’s already allowed to sit in on top secret meetings – she has privileges. And those privileges might end up costing her life. Liber8 gave her an assignment. But she was unable to complete because Kiera had got to her first.

Kiera reached out to Christine even though her boss warned her not to – he didn’t want to risk exposing her cover – Kiera brought her to the police station in open view. She did this to reassure Dillion. Kiera knew he was starting to fear his own daughter becoming a threat and so she wiped any doubt out of mind by ensuring Christine wouldn’t be welcome back to Liber8 even if she begged.

She stopped Christina from going through on her mission and she stopped the medical company from being a threat by sinking all of its shares. What they would have gone on to do with their new medication would have changed the world – though not for the better. Many people were saved from a crippling addiction all because Kiera called in Kellog.

Kellog got the company to declare bankruptcy meanwhile his lackey, Jason, got Alec’s miracle cure. Jason is clearer than he’s ever been and he’s enjoying Halo. But he better hurry up and enjoy it as long as he can seeing as other corporations have come together to stop Alec from expanding. They feel like he’s going too fast and rising too high, so they told him to slow down.

What was Alec’s response to this? He suddenly decided to grow closer to his brother. Alex reached out to Julian offering to fund all of his brother’s charitable exploits. He said he wanted to show the other man how good corporations can be.

So good it seems that they’re even willing to fund an organization bent on taking them down. I wonder why Alec didn’t think of that — or maybe he was merely hoping his brother would spare his company while he took down his competitors!

Alex has changed and Kiera finally saw that for herself when she went to her own shame of a funeral. She didn’t say anything at the time because she didn’t want to spoil it for Carlos but she knows about the missing chip in her other body and she’s disgusted by it. Whatever relationship she has with Alec is gone. Now they mean nothing to each other.

Kiera started out her time travel with only one idea and that was to get back home to her family. With John Doe there to tell her that’s not possible – what will she live for?