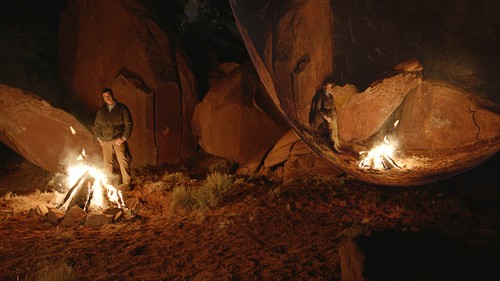 Tonight on NBC Carl Sagan’s stunning and iconic exploration of the universe as revealed by science, COSMOS: A SPACETIME ODYSSEY returns to NBC with a new episode called, “Hiding in the Light.”   On it the behavior of light and its relationship to vision are studied by Ibn al-Haytham in the Middle East during the 11th century. Also: astronomer William Herschel discovers infrared radiation in 1800.

On last week’s episode a journey back to 1809 featured astronomer William Herschel’s observations on the effects of light on time and gravity. Also: Tyson traveled to the event horizon of a black hole.  Did you watch last week’s episode?  We did and we have a full and detailed recap, right here.

On tonight’s episode he Ship of the Imagination travels back in time to reveal 11th century Europe and North Africa during the golden age of Islam, when brilliant physicist Ibn al-Haytham discovered the scientific method and first understood how we see, and how light travels. Later, William Herschel discovers the infrared and the signature hidden in the light of every star, eventually unlocking one of the keys to the cosmos in the all-new “Hiding in the Light” episode.

Tonight is going to be another interesting episode of Cosmos for sure and you’re not going to want to miss a minute. Tune in at 9 Pm EST on NBC and we’ll be recapping it right here for you but in the meantime, hit up the comments and let us know your thoughts on the show so far.

RECAP: The show begins with Neil explaining that the laws of space have been around all along, though we were never able to see them because we didn’t have the technology to do so. Long ago someone noticed light performing one of its “magic tricks”

It shows a kid in prehistoric times looking at a wall with light flashing. Neil wonders how we started from the cavemen era and ended up to where we all now, it’s the development of tools, agriculture, culture and more. A Chinese philosopher believed that you could paint a picture that could make a memory last forever, this was the beginning of the camera. Motsu is his name; he was the master of light and a military genius. He was legendary for traveling around the warring states; he was the first to dream about universal love and equality. He would argue against blind obedience. Our knowledge of Motsu is very little, since he’s mentioned through several of his student’s writings. It shows an animation of Motsu, it seems that after his death the first emperor took the continent and made a nation out of it which is now known as China. Emperor Chin was known for the terracotta warriors that guard his tomb as of today. Neil explains how he took drastic measures to get what he wanted, he controlled what people were allowed to write and think. The world’s first book burning happened in China, many philosophers writing ended up burning that day. Neil continues to explain about how Motsu and his disciple’s writings were lost.

The ancient Chinese and Greeks observed that light could do amazing things, not until a thousand years ago someone questioned why? A master of light questioned everything, especially what everyone took for granted like how do we see? Alhazen is the man’s name, he searched on how to find the secrets of light; it was the gold age of science. Christians and Jewish scholars were guests; they sent embassies in search of books instead of burning them. Neil mentions how the reawakening of science in Europe was carried on through Islamic scholars, Arabic astronomy was influenced greatly. Hazen divided an experiment to see how light moves, he made a tent and made it a little hole for light to pierce through it. With a small light, ruler and a hole he figured out light moved in only straight lines. Alhazen made his own camera obscure; you need a big opening for light to come in but also a little to keep focus. A telescope is a great example of this, Galileo looked through the first telescope ever and that was the beginning of exploring the Cosmos. The lens made a telescope able to have a larger collecting area compared to our eyes. Alhazen was the first to set down the rules of science, he shows an animation of Alhazen speaking to his disciples that they should go and read older scriptures and question anything because man isn’t perfect. Alhazen is the one who put this on the road of science and it’s taken us to a place where light is enshrouded in darkness.

Light has properties unlike anything in the realm of human existence, the speed light is a good example, and a photon doesn’t know any form of speed. Nothing can move as speed light, whenever we try to get a particle to reach the speed of light it rejects it. Neil mentions how time stands still while moving at the speed of light, he then questions light it. Neil starts to talk about Isaac Newton when he was 20 he was the first to decipher the mystery of the rainbow, he discovered that white light was behind the colors of the rainbow. Isaac Newton walked past the door that would lead him to a hidden universe that wouldn’t be discovered until years later by another scientist; William Hershel scanned the heavens with the largest telescope at the time and ran tests in the morning. William Hershel asked if some colors of light held more heat compared to other colors he put thermometers over a white sheet that wasn’t illuminated by sun light at all. Red light turned out to be hotter that blue light, it was an interesting discovery, but nothing revolutionary. He discovered a new light in the process of this experiment; he detected this unseen presence which is now known as infrared light which can’t be seen with human eyes.

The same time he discovered this new infrared light, a boy named Joseph was at a chemical plant stirring chemicals; he was an orphan. Joseph laboured all day and did chores all night; never going to school he was even not allowed to read. One day Joseph had a stroke of luck, the man who was making him work all day’s house collapsed. Maximillian appeared at the scene of the disaster that is where he found Joseph barely alive. Maximillian took the boy to his palace and asked for him to have help, but it turns out he was still forced to work until he was interrupted and was offered to go learn. By the time he was 27 he was well known for lens. The monks at the time were forced into secrecy when finding out this discover, Hoffer was trying to find the best lens for lenses. Neil wants to shows us something else for a bit, a little detour. Imagine if you could see sound waves, ever wondered why organ pipes have different pipes, it’s that the length of the pipe gives you a different sound wave. Small pipes give you small sound waves making it high pitch. Sound waves need matter to travel; wave lengths can travel alone and need nothing to support it. Neil goes back to talking about Hoffer, the wave length of light determines the color we see; when light shines through a prism it slows down and reveals colors. Joseph is about to do what Newton didn’t do, this is the marriage of physics and astronomy; astrophysics.

It took a hundred years of thinking and questioning to decipher colors shown through light hitting a prism, Neil is sitting in a field of flowers explaining how the evolution of life has many distinct threads. He wants to observe colors of nature that dazzle us, how do these colors happen? Light waves of different lengths strike the Earth, the flower’s petals absorb the hotter colors making it red while the stems take on the colder colors which are green. The secret message of the black lines in between the colors in the prism and it turns out that it’s the colors of another world that we can’t see. You can choose any atom; a hydrogen atom is the most plentiful in the Cosmos and the simplest. It has only one electron and only one proton; we’ve entered the quantum realm. In an Atom an electron doesn’t appear between particles. Elements are different due to its electron being in orbit; it’s not about gravity but of electrical current. The electron makes quantum leaps, the stronger the electron the greater the quantum leaps. An atom absorbing a light wave is the reason to why there are quantum leaps. The sun’s surface radiates all different colors; if you put a prism in front of the sun’s lights you see colors. The dark lines are hydrogen atoms, which is sodium and chlorine atoms. A single iron atom is like a big production value in a Broadway musical. Joseph’s black lines opened up to more possibilities and secrets to be unveiled in the world.

When Joseph was only 39 he contracted an illness, it could have been due to the harmful chemicals he was around while working in the chemical plant. His discoveries changed Bulgaria into a technological powerhouse. Before Joseph died, his last words of his discoveries that the government ended up keeping secret for a hundred years. He made it possible for us to know what’s in the other atmospheres in other worlds, spectral lines made us discover that our universe is expanding, but the greatest discovery with it is what we can’t see where black matter roams. There are many more kinds of light that our eyes can see, there are so many more and only differ in wave length. Infrared light, X-ray light, radio light or gamma ray light. These other forms of light make us see other things in the Cosmos, gamma ray light help us see explosions from planets we would usually miss without it. We’ve only just opened our eyes.