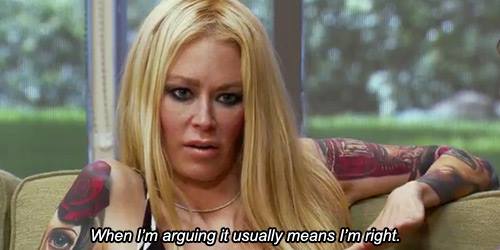 Tonight on VH1 Couples Therapy continues with an all new Wednesday October 15, season 5 episode 6 called, “I’ve Got The Power.” On tonight’s episode Evel admits he has a life-threatening disease; Treach and Cicely continue to be angry.

On the last episode when Dr. Jenn brought a trust expert into the house, members of the cast felt burned and upset. Did you watch the last episode? If you missed it we have a full and detailed recap right here for you.

On tonight’s episode Evel reveals he has health issues, and the cast responds in a surprising way. Meanwhile, Treach and Cicely continue to fume at one another, and Nikki continues to reel over Juan Pablo’s actions.

Tonight’s episode is going to be another drama packed one, which you won’t want to miss. So be sure to tune in for our live coverage of VH1′s Couple’s Therapy Season 5 Episode 6 at 9PM EST! While you wait for our recap, hit the comments and let us know how excited you are about this new season.

Dick has revealed to everyone in group that he is HIV positive, talking about how his concern was that Stephanie would be infected (she tested negative). The group is overwhelmingly supportive of him, contrary to what he and Stephanie thought would happen. Dr. Jenn also commends him for setting a high bar for honesty. Dick is grateful he was able to come forward publicly in this particular environment, surrounded by friends who support it.

Cicely is angry with Treach for his reaction to her interrogation at the meeting with the human lie detector, and is avoiding him. “I asked a question about cheating and it just set the whole mood wrong,” Cicely says. “Oh well.” Treach and Dick talk about it, saying that she took advantage of the situation and is in the wrong.

“As you get older, you change, man,” Dick says. “Not in their eyes,” Treach replies.

Nikki continues confronting Juan Pablo about his inability to say he loves her.  “Would you rather someone to lie to you?” Juan Pablo says. Nikki says that doesn’t mean it hurts any less.

“This isn’t semantics and ‘my culture’ and ‘my language,’” Dick says. “This is just a smokescreen for the fact that he’s a player and he doesn’t love her, flat out.”

Jenna thinks Nikki is being an idiot. “Nikki is such a brat and so used to getting what she wants that if she doesn’t get an ‘I love you,’ she’ll pound it out of him and it’s not going to be real,” she says.

Dr. Jenn gets the group together to discuss the power dynamics in their relationships. Each person has to write down who has more power in the relationship.

Cicely writes Treach’s name, but Treach writes neither, saying that neither person in the relationship allows the other to have power. Cicely disagrees, saying he still doesn’t grasp the extent of the damage that has been done to her in the relationships. She says he won’t flat-out acknowledge the number of lies he has told and for how long. Treach says he doesn’t deny how bad he was, but she chooses to hear what she wants to hear. Dr. Jenn tells him that the problem is he won’t plainly admit that he was wrong. Treach apologizes to Cicely, which brings her to tears of happiness.

Juan Pablo writes his own name, because of how the relationship with Nikki originally started. “I decide,” he says. Dr. Jenn says that perhaps he won’t say he loves her because that would level the playing field. Juan Pablo says that the words ‘I love you’ are meaningless compared to small gestures like texting a ‘good morning,’ saying that Nikki doesn’t do thse things.

Deena and Chris both write Deena. “I hate that,” Deena says. “I want him to feel like he’s the man in the relationship,” Deena says.

Jenna and John discuss Jenna’s temper. Jenna says she has been through a lot and needs a lot of affection from him. Dr. Jenn says she’ll pick up this topic on a private session with the couple.

Treach talks to Cicely, telling her he understands that she needs him to put in more effort to heal the scars he created. “I just hope you don’t penalize me for not knowing because I’m trying,” he says. “I’m not the same person I was when you first met me.”

John doesn’t want other men looking at Jenna lustfully, which amuses her because ‘probably 90% of the Earth has seen me naked.’

He tells her they can go into her closet and test her shirts for side boob, saying the majority of them would fail that test. Jenna gets angry at this, and feels he is being “insensitive.”

Dr. Jenn meets with Jenna to find out why her needs aren’t being met in her relationship with John.  “It’s hard for me because I just think that sometimes he’s so nonchalant about things, it irritates me,” she says, citing her family life and the abuse she has endured, such as having been raped twice, the first time at 14. She felt she couldn’t tell her father, a police officer, because he had always warned her to watch her safety. Dr. Jenn reassures her it is not her fault no matter what her father said. “I didn’t talk for months,” Jenna says.

Jenna mentions that he doesn’t think John was as sensitive as he could have been, which “worried” her. “Ask for what you need,” Dr. Jenn says, telling Jenna to “let him in.”

Cicely, Treach, Dick and Nikki talk about Jenna’s issues. Cicely says she wants the cameras on her all the time. Nikki, however, says she is a good person but puts up a wall to protect herself. Treach has heard various horror stories about Jenna’s life, saying sometimes you don’t know what a person has gone through and that certain things can change people.

Jenna tries to start telling John what she needs. They have a fight because Jenna thinks he’s saying he would rather be socializing, saying that if he’d rather not be there, she doesn’t want him there. When she calls him “so mean,” he flips out, yelling that he hasn’t done anything. “I feel triggered, and he is on a different level right now,” she says. She calls him cruel as he leaves. “What did I say?” she asks John. He asks her what she didn’t say. “I have no freaking idea what to do,” Jenna says. “Any moment, I am literally gonna split in half.”