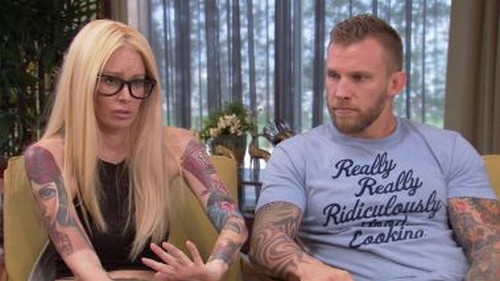 On last week’s episode Couples Therapy was back with its season 5 premiere, in which one of the couples was judged by the others when they entered the house.  More happened!  Did you watch the premiere?  If you missed it we have a full and detailed recap, right here for you.

Tonight’s episode is going to be another drama packed one, which you won’t want to miss. So be sure to tune in for our live coverage of VH1′s Couple’s Therapy Season 5 Episode 2 at 9PM EST! While you wait for our recap, hit the comments and let us know how excited you are about the new season.

Tonight’s episode of Couple’s Therapy kicks off with Day #2 in the house, Evil Dick is sitting outside smoking with Treach ranting to him about his issues with Cecily. He has had enough of her trust issues. All of the couples head in to group therapy with Dr. Jenn. She decides to start with Cecily and Treach and asks them why they have come on the show. Cecily admits that she doesn’t trust him and is afraid that he is cheating on her. Treach explains that he has never cheated on her, he only hooked up with other girls when they were broken up. Cecily interrupts and reveals that the reason she thinks he is cheating is because someone told her that while he was on the road he cheated on her multiple times. They both agree that when they fight it is no-holds-bar, and they say hurtful things.

Dr. Jenn turns to Juan Pablo and Nikki, and asks them why they are on the show. Juan Pablo says that the reason that they have had so many problems is because after they were on The Bachelor the media is attacking her. Nikki explains that she is a very private person, and she is tired of everyone interfering with them, she just wants to have a normal life with him.

Deena and her boyfriend go next, Deena breaks down in tears and cries that she has a really had anxiety disorder and is on medication since she was Jersey Shore. She is always afraid that something bad is going to happen. Chris explains that he feels like he can’t make her happy because it is out of his control and he can’t fix her disorder.

Dick and Stephanie are up next, Dick confesses that the reason they broke up was because he got sick of fighting with her and one day said “f—k it I’m outta here,” and left. Stephanie confesses that she never wanted to have children, but now that she is 41, she realizes that she wants to have a baby. Dick is confused why out of the blue she is suddenly bringing up having children, when it was never on the table before. Dr. Jenn interrupts and tells Dick that he can’t blow off Stephanie’s feelings like he just did, she opened up and Dick shut her down. She explains that he needs to take her feelings in to consideration and not get caught up in his own stuff.

Dr. Jenn dismisses the couples and tells them to go enjoy their day. While they are all out on the patio, they learn that the fifth and final couple will be arriving for Couple’s Therapy. They all sit around and speculate who the fifth couple will be, and predict that it will be lesbians.

Jenna and John head to their room to get settled in, and Jenna is not impressed with her new living arrangements. She says that their room feels like a death box, because it is so small and gray. She complains that gray gives you nightmares and she isn’t going to be able to sleep in the room.

Treach and Cecily head to a private session with Dr. Jenn. She wants to get a sense from both of them what their main issues are. Cecily explains that the foundation of their relationship was based on lies. She explains that when they first met Treach had an ex that was pregnant, and he never told her. Treach argues that she never asked him point blank about his baby-mother, so he didn’t lie. If she asked him, he would have told her. Treach and Cecily begin arguing and she reveals that if they break up she is taking their kids with her and moving back to Ohio. Dr. Jenn interrupts and tells her that no matter what happens in their relationship, Cecily can’t take her kids out of state, they need to know their father.

Later the couples gather around the table for lunch, and Nikki and Juan Pablo are put on the spot and have to explain to everyone else why the media hates Juan Pablo because he didn’t propose to her. Jenna Jameson isn’t a fan of The Bachelor, she thinks that it is wrong to pit women against each other on national TV to fight over one guy.

John and Jenna head in to a private session with Dr. Jenn, she wants to make sure that Jenna and John’s issues from their prior relationships aren’t affecting their current relationship. Jenna explains that the reason she is attracted to John is because he doesn’t let her get away with a lot and he “busts her balls.” John confesses that they are both very strong-willed, but he knows when to say okay and cave and end an argument. Jenna doesn’t think that she is wrong to stand up for what she believes is right.

Jenna and John head back to their room and Jenna rants that she wants to leave and she refuses to “live in squalor.” John argues that just because the walls are gray doesn’t mean that it is squalor. Dr. Jenn hears them arguing and heads in to their room and asks her what is wrong. Jenna complains that their bathroom isn’t working properly and the toilet is leaking. Jenn apologizes for the bathroom, and points out that Jenna is convincing herself that she is uncomfortable and has to leave because the room isn’t acceptable, because she is actually scared of therapy. Dr. Jenn decides to give her some time to cool down before she pressures her anymore.