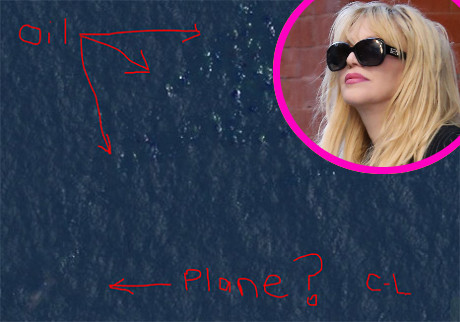 If you need a mystery solved, give Courtney Love a call. The singer is apparently trying to add CSI detective to her resume. Courtney claims she may have found the missing Malaysia Airlines flight 370 that disappeared on March 8. Just check out her findings above (all that beautiful detective work is from Courtney’s own hand!) “I’m no expert but up close this does look like a plane and an oil slick . . . prayers go out to the families #MH370,” she wrote on Twitter as she was following a lead.

She then posted a picture pointing out her evidence. “Really? look closer? check it out @DR24 #MH370 and its like a mile away Pulau Perak, where they ‘last’ tracked it,” she captioned the photo. Courtney wanted to do her part after reading an article on Tomnod.com. She asked people to help with the search. She actually found the photo herself by going on a satellite site and looking through the pictures being uploaded. “I really doubt aliens took it. It’s got to be somewhere. I’m a little obsessive,” she admitted to New York Magazine.

“I figured a plane would still be leaking some fuel so I searched for signs of an oil slick. I found one and there appeared to be an object nearby. I don’t know if it is the plane or not, but I figured I’d do my part and bring some awareness to the site, for the sake of all the families involved.

Despite the rocker’s efforts, Tomnod had already ruled out the spot Courtney found. “Although it is still an interesting clue, it is looking much more like the other boats operating in the region,” Tomnod wrote in a Facebook post prior to Courtney’s findings. “Keep up the good work,” they added.

Courtney has yet to release any more information or evidence she has gathered. However, she has retweeted several news outlets reporting that she may have found the plane. This situation is very serious and Courtney probably really does mean well, but let’s be honest, it’s humorous to think she really solved the mystery that has baffled even the most experienced people.

The photo is also posted on Courtney’s Facebook page. “Swear to god if courtney love finds the f******* plane,” someone commented. And I agree!

All jokes aside, the singer did express her sympathies. “I hope they find the plane, I pray they’re still alive, it’s sad and my heart goes out to all those involved.” CDL also sends thoughts and prayers to those affected by this tragic situation.

What is your take on Courtney Love conducting her own investigation of missing flight 370? Is she trying to be helpful or should she leave it to the professionals?