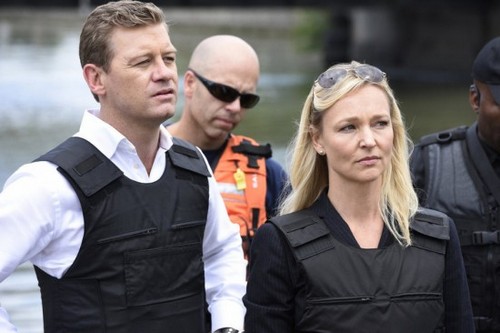 Covert Affairs continues tonight on the USA Network with an all new Thursday, November 20 season 5 episode 13 called, “She Believes” and we have our weekly recap below for you. On tonight’s episode Annie [Piper Perabo] works with an ally to expose Belenko’s misdeeds; McQuaid and Joan head into the field; Calder asks Sydney to make a dangerous gamble.

On the last episode, Annie headed to Germany in search of a rogue chemist after Auggie uncovered a startling link between the recent attacks on American soil. Suspicious questions about Joan’s time in the Balkans rose to the surface during an unplanned polygraph. Did you watch the last episode? If you missed it we have a full and detailed recap, right here for you.

On tonight’s episode as per the USA Network synopsis, “Annie will team up with a new ally after some shocking revelations. Joan and Ryan will also work together and go into the field. On the other hand, TV Guidereports that Annie will try to expose Belenko’s crimes and she might have to learn to trust a new partner. Meanwhile, Calder puts Sydney in danger again when he asks her to make a perilous gamble.”

Auggie is missing on tonight’s episode of Covert Affairs. And his friends are all rallying to help in any way they can.

McQuaid chose to go ahead and take the news about Auggie to Joan and Calder when he couldn’t at first find Annie. But as it turns out Annie is probably the one in the position to get Auggie back safe and alive.

You see she’s planning on getting herself some leverage. The woman that had helped her last week wants what she wants. They both want to rid themselves of Belenko. So much so that’s even why the mystery woman saved Annie in the first place. Apparently she’s going to need help with her plan to kill Belenko and by having Annie on her side they might actually achieve what they set out to do.

But Auggie’s position, when she had finally learned about it, has made Annie second guess her earlier decision to assassinate Belenko. Now that she knows her friend is in a perilous condition – she wants to kidnap Belenko rather than kill him. Annie figures she can use Belenko as bargain chip and make some kind of trade. Then and only then will she get Auggie back.

Although, technically, Auggie is still an operative. And does mean something to the people he works for if not to Annie.

It’s supposed to be the CIA’s mission to protect Auggie. And Joan was upset that neither McQuaid nor Annie had warned her one of her agents was in danger. Though she likes to forget the part where Auggie had come to her about his friends’ suspicious deaths. So in the end McQuaid had to remind her of that.

Auggie did come to her for help and all Joan did was put him on suspended leave. So he found other alternatives. He turned to Annie and to McQuaid after they showed they were only people willing to listen to him. And they in turn did try to convince him to go into protective custody. But he refused. And it was his right to.

So Joan shouldn’t try putting the blame on anyone other than herself. She wasn’t listening when Auggie had something to say and Calder was far too busy manipulating Stephanie to keep his eye on the ball.

Calder has tasked his favorite call girl to plant a bug on her longstanding john. And yet there was a point when she had almost showed her hand. He was called into work and she still hadn’t gotten the chance to plant the bug. So things had nearly gotten violent when she played up her part as the distraught mistress to buy herself time. Luckily Stephanie was able to sweet talk her way out of trouble as well as plant the bug but why is she involved in this? If Calder loves her then he shouldn’t be this prepared to risk her life?

Calder later used the information she provided him with to get a man on the inside of Belenko’s government. And they ended up learning something about Belenko. As it turns out he’s not originally from country Georgia. He’s simply from a neighboring eastern European country but from all appearances – he’s ashamed of it. So now, thanks to Stephanie, they at least learned one of Belenko’s secrets.

And though it’s not much – it’s more than what Annie got. She kidnapped Belenko and he still wouldn’t tell her where Auggie was. All he did say was that Auggie was alive and for now that has to be enough. Belenko’s people eventually traced his position and when they found him – they killed Annie’s new friend.

So really Annie lost more than she gained in kidnapping Belenko!