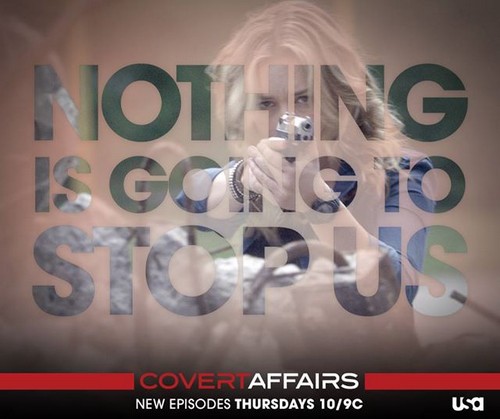 Covert Affairs continues tonight on the USA Network with an all new Thursday, December 4 season 5 episode 14 called, “Transport Is Arranged” and we have our weekly recap below for you. On tonight’s episode Annie [Piper Perabo] and McQuaid sneak into Russian territory to find Belenko while Auggie [Christopher Gorham] is involved in a confrontation resulting from unanswered questions from her past.

On the last episode, Annie teamed up with a new ally after some shocking revelations. Joan and Ryan also worked together and go into the field. On the other hand, TV Guide reports that Annie tried to expose Belenko’s crimes and she had to learn to trust a new partner. Meanwhile, Calder put Sydney in danger again when he asked her to make a perilous gamble. Did you watch the last episode? If you missed it we have a full and detailed recap, right here for you.

On tonight’s episode as per the USA Network synopsis, “Annie and McQuaid must sneak into Russian territory in pursuit of Belenko.”

Belenko is Chechen by birth yet he works as a Georgian Diplomat and is protected by the Russians. So obviously Langley is left baffled by the mystery that is Belenko.

They have an enemy they can’t figure out and an agent that’s missing. Everyday Auggie remains in Belenko’s custody is the closer he gets to death. At the moment though Belenko merely wants to get answers out of Auggie. And he’s not asking questions about Langley or even about Annie for that matter. It seems Belenko actually wants Auggie to remember one particular covert mission some years back.

Because, clearly, something happened in Chechnya back in 2005 and Belenko is very interested to get Auggie to talk about it. Sadly, Auggie claims not to remember that far back. So Belenko has developed his own “methods” to trigger Auggie’s memory.

In the meantime, Auggie and McQuaid have arrived in Grozny. They’re looking for Auggie and trying to dodge suspicion. Neither of which they appear to be of any good at.

McQuaid’s oversee associates aren’t being as accommodating as they used to be. His friend Omar had let them down at the border. Omar was supposed to be the one that cleared them through. Yet he wasn’t there so Annie had to bribe a border agent to get them pass the checking point. And then when they did manage to locate McQuaid’s friend – Omar tried to get them back off looking for Auggie. He said their friend was a lost cause.

And that’s when Annie lost it. She didn’t care that Omar was McQuaid’s friend. She just shot him as a warning and demanded to know everything he knows about Belenko. Or else! Annie had seen through Omar’s fear and she knew he was hiding something from her. But McQuaid would have appreciated it if she had let him in on her plan before she had acted.

Yet that’s not Annie’s way. She’s worried about her friend and that fear has only exasperated her tendency to be reckless. She thinks Auggie is about to die and so she’s going to do everything in her power to stop that. Even if she risks upsetting McQuaid in the process.

However Auggie does remember the last time he was Grozny. He had simply lied to Belenko earlier. At the time of the incident, Auggie was in Grozny along with all his friends. The same friends that have been killed one by one recently.

Everyone has wanted to know Belenko’s agenda and yet it’s not about money or power for him. All this time, the only thing Belenko has done has been about avenging his brother’s death. His younger brother was part of the team that Auggie had met in 2005. They were supposed to have come to some sort of agreement and Auggie was acting as the CIA’s mouth piece. But then the deal went south and Auggie’s operatives got caught in a shoot-out with the Chechens.

Belenko’s brother had died in that shoot-out. And now every CIA agent that was involved with the deal has been hunted. Though Belenko hasn’t gotten the man he’s been looking for. He wants the agent that had killed his brother.

Mikhail was shot by a CIA agent that had earlier infiltrated his group. The agent’s name was Decker and Decker had allegedly died during the shoot-out as well. Yet Belenko never bought that story. Decker’s body wasn’t found at the scene and so Belenko feels Auggie is hiding something. And he is.

Auggie helped Decker get out of Grozny and he arranged his “death” after the other man had admitted he couldn’t return to the CIA. It seems Decker had had enough. He was tired of the missions and knew he couldn’t handle the aspects that came with the job. So Auggie got him out.

Auggie had went to great lengths to help his friend and he wasn’t going to turn him to over to a man like Belenko. No matter how much he was beaten or starved. But then Belenko found his weak spot. Belenko had found Tash and he was prepared to torture her to get Auggie to talk.

Yet Belenko had made a mistake in his calculations. He had taken Auggie and Tash to the same building his brother was murdered in. And Auggie had scouted that building for weeks prior to that fateful meeting. So he knew it like the back of his hand which ended up coming in handy.

Annie and McQuaid had found the building he was in and they were going to rescue him when Belenko set off a bomb to delay Annie and assist his own escape.

When that bomb went off, Annie honestly thought her friend had gone down with the building. But he hadn’t. He and Tash had escaped before the explosion. And after that Annie and McQuaid had to move quickly. They had to get Auggie out of the country before the Russians moved in.

Though Auggie wasn’t as concerned about the Russians as he was about his friend Decker. Decker had saved his life and now Auggie has to race against Belenko’ men to see who will get to Decker first.

Meanwhile, back at Langley, Calder received devastating news. Someone had shot Stephanie and he doesn’t know who or why!