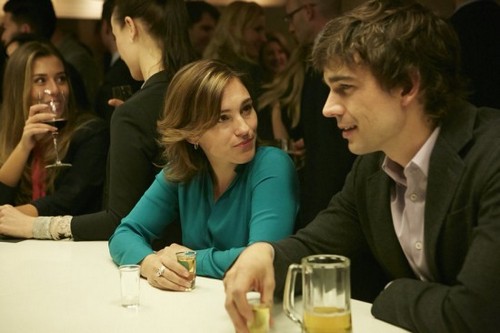 COVERT AFFAIRS continues tonight on the USA Network with another episode in its fifth season called, “False Skorpion” On tonight’s episode Annie considers working with Ryan McQuaid to catch a terrorist in Venezuela; Auggie is questioned.

On the last episode the Season 5 opened with finding Annie and Auggie thinking about the future just as a connection from the past resurfaced and lead Annie on a race against time to prevent a terrorist attack on U.S. soil. Elsewhere, tension mounted between Calder and Joan as they waited to see who would become the new boss; and Arthur thought about a career in the private sector. Did you watch the last episode? If you missed it we have a full and detailed recap, right here for you.

On tonight’s episode Annie may have to work with Ryan McQuaid to capture a terrorist. Elsewhere, Auggie is questioned by the NCTC regarding a threat facing the intelligence community.

Tonight’s episode looks like it’s going to be great and you won’t want to miss it, so be sure to tune in for our live coverage of USA Network’s “Covert Affairs” at 9:00 PM EST! While you wait for our recap hit the comments and let us know how excited you are for the second episode of season five of Covert Affairs tonight. In the meantime, enjoy a preview of tonight’s episode below.

The last of the infamous terrorist family, Boris, popped back up on the radar. And he wisely chose to do so in Venezuela. The CIA doesn’t have any friends in the country. Merely a handful of spotters so Annie will essentially be on her own for most of this search.

Although very soon into her trip Annie somehow managed to find company. She had run into McQuaid and sadly for her he wasn’t alone. She couldn’t get the best of him even if she tried and she would have tried too if not for his back up. McQuaid swore he didn’t know where Boris was and yet he’s conveniently in the same country as the man she’s hunting.

McQuaid is hunting him too and because he needs the help and he most assuredly knows that she needs his help – he offers to join forces. He proposed they work together and all she has to do in return is not ask a lot of questions. Like about he came to be there or Boris’s importance to him. But Annie refused his offer. She doesn’t trust him and that’s why she planted her phone on his persons. She needed Auggie to be able to track him down if necessary.

In the meantime, there are a lot of questions surrounding Joan about McQuaid’s sudden appearance. How is that he knows so much? Is he possibly getting intel from inside the CIA? And naturally when thoughts veer there – Joan becomes a suspect. After all it is her husband that’s working at McQuaid’s Security. Arthur can easily pass on information from his wife to his boss if necessary. Even though he did just return to work.

Calder had to warn Joan about this and she in turn had to tell her husband that they were going to have to talk later. Arthur isn’t a dumb man. His boss isn’t where he claimed to be and people tend to forget that Arthur still has contacts from his time in South America.

Back in Venezuela, Annie’s plan worked and McQuaid did actually lead her to Boris. Though she didn’t think his men would be on a shoot first and ask later mission. It was reckless of them to open fire in public and Annie ended up losing sight of Borris thanks to McQuaid’s men’s negligence. They only managed to injure Boris and the scene they created drew the police down on them.

Annie doesn’t know what McQuaid said to get out of the charges but she personally talked her way out by pretending to be a ditzy blonde who came down there to get breast implants on the cheap. Though she also lost her medication during the process. One officer confiscated and she couldn’t afford to re-fill in a foreign country else she risks her cover.

Managing without her med is going to be tough on Annie. She’s relied on them heavily since returning to work and thankfully Annie’s mission is coming along easier thanks to Boris getting shot in the earlier fall-out. In his first days of arrival, Boris had taken refuge in a Mosque and while there he had befriended the Imam’s daughter. Both Annie and McQuaid saw the girl’s importance and when they went back to check up on her they noticed that she recently bought medical supplies.

Annie got to the girl first and she warned her about what kind of man Boris is. So the girl took her to Boris’s hideout. She’s young and she quickly figured out for herself that a crush wasn’t worth risking life over.

Boris tried to flee and Annie caught him. But not long after she did – she had a panic attack and that’s how McQuaid found them. While Annie was unconscious he had his hour to talk with Boris. What they discussed is really anyone’s guess and by time Annie regain consciousness McQuaid offered to help transport Boris back onto American soil.

McQuaid saw what happened to Annie though (for now) he says he’s not going to tell anyone. He knows she’ll lose her job if he did which is why he’s keeping quiet.

But even if he keeps her secret there’s Hailey Price back in DC digging into Annie’s life. Hailey was sent in to investigate the bombing in Chicago and currently her biggest concern is whether or not Annie slipped up by mistake or intentionally. And while she’s doing that, she and Auggie have also used this time to get to know each other in the biblical sense.

Can Auggie distract her or will Ms. Price learn Annie’s career ending secret?