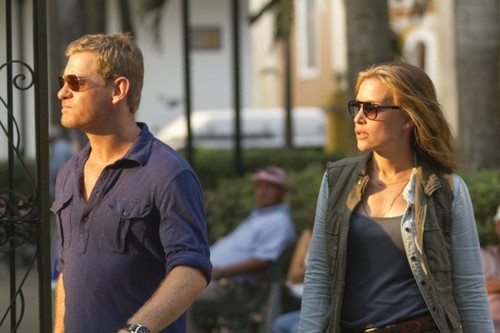 COVERT AFFAIRS continues tonight on the USA Network with another episode in its fifth season called, “Unseen Power of the Picket Fence.” On tonight’s episode Annie and McQuaid join forces to get out of Venezuela, while Joan works with Arthur and Caitlyn Cook to extract their fellow operatives. Elsewhere, Calder’s affair takes a new direction.

On the last episode Annie may have had to work with Ryan McQuaid to capture a terrorist. Elsewhere, Auggie was questioned by the NCTC regarding a threat facing the intelligence community. Did you watch the last episode? If you missed it we have a full and detailed recap, right here for you.

Tonight’s episode looks like it’s going to be great and you won’t want to miss it, so be sure to tune in for our live coverage of USA Network’s “Covert Affairs” at 9:00 PM EST! While you wait for our recap hit the comments and let us know how excited you are for the third episode of season five of Covert Affairs tonight. In the meantime, enjoy a preview of tonight’s episode below.

Getting Boris back onto U.S. soil is harder than they it would be. Funnily enough they didn’t make it pass border control because two teenage thieves turned them in to the police. The teenagers were originally planning on robbing Annie and McQuaid but they changed their minds upon seeing Boris’s body in the trunk.

So Annie and McQuaid’s team were forced to flee the area and then to later on split up. They have the entire force of the Venezuelan police out looking for them and McQuaid is only making their situation worse by doubting the CIA. Annie had tried his plan first when they attempted to cross the border and seeing as that failed she thought it was best to switch gears. That’s why she’s pushing for him to accept the CIA’s intervention.

But he doesn’t like that plan and neither do his people back in the states. His second in command had truly thought she could simply go up to Joan and tell her to back off. And, predictably, Joan put her in her place. The CIA are in charge of Boris and they will be going through with their extraction plan. So they told McQuaid’s people to stand aside.

Arthur had tried to warn them and yet they didn’t listen. Once Joan became involved then Boris wasn’t going to slip through their fingers.

However he might just die in them. Boris had suffered a collapsed lung and Annie along with McQuaid’s assistance had to perform emergency surgery on him. They manage to keep Boris alive though his prognosis isn’t looking too good. And anyways Annie is too smart to risk bringing him to a hospital. The second someone like Boris recovers – he’ll disappear. He’s that good!

Boris has vital information on the attack in Chicago so he can’t die. But Annie soon came to realize that she could use the pain he’s already in to coerce him to giving up the people he works for.

The physical pain he was in wasn’t enough to get him to turn. And after she had to deal with a minor skirmish with the Venezuelan police – she returned to him using a different strategy. She talked to him about Oksana. How Oksana even at this moment could suffering under the hands of the CIA. From the looks of it he seemed pretty concerned about her so Annie made sure to use it against him (nevermind the fact she personally killed his sister a few days ago).She got him to reveal a location where he meet with whoever hired him.

As for the rest that Annie needed to know, it was all a blank. Boris was never let it on the secretive stuff. He was the hired gun. Hence he didn’t do much besides follow his “orders”. And once he was done taking them – his own people were willing to kill him.

Boris was replaceable to them and so his death won’t be met with any operatic retaliation on the grand scale. At least not from the terrorist because the other side to Boris’s death basically equals trouble for Annie. This isn’t going to look good for her. Auggie’s newest fling came down to specifically investigate Annie’s involvement in the Chicago fiasco and finding out that the CIA’s only lead is now dead – on her watch – is bound to raise suspicions.

Speaking of suspicious, the legendary iceman known as Calder has started a fling of his own. But why is the girl he’s flirting with meeting up with someone else for a nice hotel stay? And let’s not kid ourselves – Calder could have done better if he wanted to. Yet he chose her and there must be a reason.

A man like wouldn’t just go to any old prostitute. Even if she’s high class!

Annie and McQuaid made it across the border and that’s thanks to McQuaid’s people. Joan didn’t have an inside man on the border patrol but McQuaid’s Number 2 did.

They made it across on a hefty price tag. One McQuaid was willing to pick up by the way. So maybe that’s what got him thinking there could be something more between him and Annie. Though she quickly shut him down before he could make a real offer. It seems like Annie finally learned her lesson about mixing business with pleasure. Plus she still has some doubts about his character.

McQuaid can claim he’s a patriot all he likes but she’s not going to trust him that easily. So he’s hoping his present – a new gun – will help bridge the gap between them!