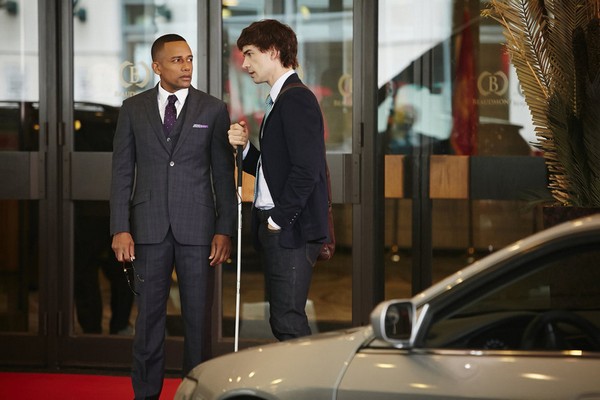 On the last episode Annie initiated an undercover mission without CIA support while Calder interrogated Auggie regarding a breach of protocol. Meanwhile, a new recruit arrived at McQuaid Security. Did you watch the last episode? If you missed it we have a full and detailed recap, right here for you.

On tonight’s episode, in the season five finale, despite Auggie’s wishes, Annie helps McQuaid with a tough mission. Elsewhere, Hayley is determined to find the truth before disaster strikes U.S. soil.

Tonight’s episode looks like it’s going to be great and you won’t want to miss it, so be sure to tune in for our live coverage of USA Network’s “Covert Affairs” at 9:00 PM EST! While you wait for our recap hit the comments and let us know how excited you are for the seventh episode of season five of Covert Affairs tonight

McQuaid’s security firm is being dismantled bit by bit. Caitlyn had allowed the CIA carte blanche to look at wherever or whomever they wanted in hopes of being able to save the company from a public scandal. However word tends to spread in their type of community (ironically enough Black ops isn’t as secretive as many choose to believe) and so McQuaid’s has been steadily losing business while the CIA’s investigation continues to drag on.

And as for Annie, she’s been looking in on the official investigation in order to conduct one on her own. She believed Ryan when he told her he was innocent. Hence not only is she helping him by examining the evidence but she’s also going on with the lie that McQuaid must have fled at the first opportunity he was given seeing as she knows darn well that he gave up his original chance at running just to see her. And no surprises here – that when he needed help he again reached out to Annie.

He needs to flee the country and generally he would turn to Caitlyn in times like that. Though as Annie pointed out Caitlyn could be the one that’s been setting him up this whole entire time. She doesn’t trust his second-in-command and after filling him on recent events at the office – he began to suspect Caitlyn as well. She’s always been his blind spot so he knows that she’s fully capable of deceiving him. Why wouldn’t she if she knows that she can get away it?

So he and Annie set a trap for her. He arranged a meeting with Caitlyn with Annie acting as his back-up with long range rifle. Then when she appeared to be telling him lies even as she claimed to want to help – that’s when he truly lost faith in her. He wasn’t looking before and now that he is he could see for himself that she’s been to lying to him for a while.

Caitlyn gave him what he had asked her to bring though she left out the part about putting a locator into his things. And so with that – he has firm confirmation on who betrayed him.

Meanwhile back at the department, Hayley and her people have begun to look into Annie. Hayley is a firm believer that Annie is hiding McQuaid. She read the report that Auggie and Annie had handed in and she could read in between the lines. She knows Annie and McQuaid have more of a relationship that Auggie is letting on. So she warns him.

Hayley told Auggie that Annie lies to him and hides important information from him. And she then wonders aloud why he still puts all of his trust in her. Auggie’s only explanation is that he knows Annie probably better than anyone else. So he knows she’s not a traitor or a threat to national security.

But she does frequently betray him. Although Annie doesn’t actually start sleeping with their prime suspect until after Caitlyn showed her hand – though she did still collude with McQuaid behind Auggie’s back. And when Auggie found out about her recent movements – he finally had had enough. He’s done covering for her if she can’t even muster up the same enthusiasm to protect him in return.

Annie had only checked in with Auggie when she realized she needed his help and that’s same old story with them. So Auggie said no more.

Annie and McQuaid had found out that Caitlyn and her people were setting up a bomb. They thought they also had the location pinpointed but Auggie caused a scene for nothing when there wasn’t a bomb as the hotel like he had told Calder. So McQuaid then tried to go to the source. He went to Caitlyn alone thinking that he had her at an advantage and she ended up shooting him before he could learn more about the bomb.

Yet if he had only stayed with Annie then he would have been with her when she found the bomb by simply following the paper trail. Hayley had found her before she could act on the information though at the very last second Hayley amazingly chose to trust Annie and her intel. Thankfully, the other woman didn’t want to risk being wrong about a bomb.

And so it was with Hayley’s help that Annie stopped the bomb prior to it killing several influential diplomats at a treaty signing. Though she wasn’t the one that took Caitlyn down. No, that was Caitlyn’s partner and well-known Georgian Diplomat that killed her. He’s also the one that arranged the treaty to begin with. So if he’s going this far to take down the opposition – nothing is going to stop him from trying again.

But Annie is going to be there to stop him. She’s no longer with the CIA, Auggie has called it quits, and McQuaid is currently stuck in the hospital which means there’s no one holding her back on going off half-cocked.

She’ll be conducting an underground investigation and her former partner will be partaking in a sanctioned one. Joan and Calder had sensed something was wrong in this whole peacekeeping mission and so they enlisted Stephanie to help turn a diplomat they need.