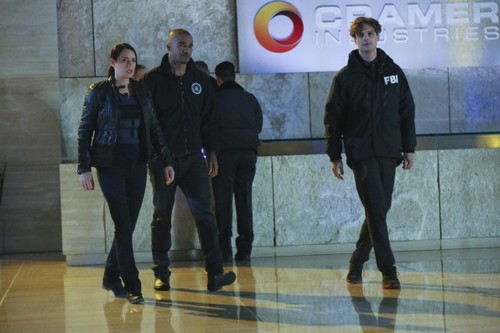 Tonight on CBS CRIMINAL MINDS continues with another new episode called, “Gabby.”  On tonight’s season 9 episode 16 a 4-year-old girl disappears while staying with a relative in Mississippi. The investigation uncovers some startling information as the BAU race to find the child and bring her to safety.  Did you watch last week’s episode?  If you want to catch up before tonight’s new episode, we have a full and detailed recap, right here.

On last week’s episode the BAU investigated several murders in the Pittsburgh area and the probe revealed that the crimes were likely committed by a pair of killers working as a team. Meanwhile, Garcia and Morgan shared their Valentine’s Day plans for their significant others.

On tonight’s episode when a 4-year-old girl goes missing while staying with a relative in Mississippi, the BAU uncovers some startling truths as the team races to find the child and bring her to safety.  Series star Thomas Gibson directs the episode. Ashley Jones (“The Bold and the Beautiful”) guest stars as Kate Hoffer, the missing girl’s mother.

The BAU’s new case involves four year old Gabby Hoffer. Her mother had won a cruise to the Caribbean in a raffle and decided to drop Gabby off with her cousin, Sue. And Sue was great with her. They played together and everything was fine till night time. That’s when Gaby would have trouble sleeping so Sue would usually take her out for a drive to lull her.

On one drive in particular, Sue realized she needed some things from the market. Gabby was already asleep and Sue didn’t want to go through the hassle of waking her and then going for another drive. She waited until there was no one else around and ran into the market. And in all fairness she was quick about it. Garcia has it timed as under four minutes but when Sue came out she saw that Gaby was gone.

Because of the crunch time, the team believe their culprit most have been stalking Sue and the little girl. That’s why he knew when it was the perfect time to act. Now there’s not a lot of history of missing children in the area although there is a high concentration of sex offenders in the neighborhood. If that’s the case then they’re going to have to find Gaby in the next 24 hours or she could be gone for good.

The hope is that it was someone Gabby knew that took her. Like her dad for instance. He’s trucker driver and him and Gaby’s mother, Kate, split up over a year ago. Since then he hasn’t seen Gabby or contacted his ex-wife. Yet for a supposed truck driver Doug doesn’t have his cell phone on.

Kate and her boyfriend came back from their cruise and were instantly questioned by the BAU. They wanted to know if Gabby would ever go off with strangers. She wouldn’t have. Her mother swore she taught Gabby better. But Gabby could have left with someone she knew. Then Kate realized who they were talking about. She’s more scared now thinking its Doug that has her baby. He’s not a good guy. Doug has a temper.

JJ and Morgan were around Sue’s house when JJ ran into one of Sue’s neighbors that was luckily still up. She asked the woman if she happened to see a van lurking around lately and was told yes. The van the woman gave a description of was eventually traced to some guy named Ian. Ian has what looks like second degree burn marks. The kind he would get if he stood to close trying to burn a body.

But they don’t get why Ian could have taken Gabby. Kate explained to them that Ian was a good friend of her ex-husband. He used to sell Doug drugs. Apparently Ian and Doug kept up their friendship because Ian admitted to giving Doug a ride a couple of days ago.

Since the lift to now though the friendship went sour. The cops trace Ian’s last steps and they didn’t find the body of Gabby. The found the body of her father, Doug! Ian tried to burn Doug’s body and when that didn’t work out he tossed pieces of the man’s body into the water.

Gabby’s blanket was found in Ian’s car but he swears he had nothing to do with her missing. Maybe his secret girlfriend could help fill in the pieces. Ian has been secretly seeing Sue behind Kate’s back. Kate hates Ian ever since he kept her husband knee deep in drugs. That’s why; Sue explained to Hotch, she never told Kate about her relationship.

Still that left Hotch with a bad feeling about her. They saw footage of Sue going into the market that night. Not only did she hesitate in the parking lot but why didn’t she also park the car in the light or at least closer to the store? No single woman would park her car in the shadows at night. No matter what excuse she can come up like not wanting to wake Gabby up.

They talked to Ian again. This time they brought up Sue. If Sue committed a crime then he shouldn’t take the blame for her. Ian finally broke down. He admitted to witnessing Sue kill Doug. She killed him and then put the weapon in a shoe box in the closet. When someone asked why Sue would put the murder weapon in a closet they were told it was because she thinks she’s too smart to get caught.

Sue is a sociopath. A fact Hotch checked up on when he purposely provoked her to see how she would react. She attacked him. Kate and her boyfriend saw the marks on their face and were worried. The team wanted to send Kate in to see if she could get anything out her cousin. She couldn’t.

Sue did all of this to hurt Kate. She hated how perfect Kate’s life was and how it’s always been even when they were kids. Sue’s parents died and she went to live with Kate’s life. Where she also happens to claim Kate’s father molested her. That’s why Sue made sure that Kate would never get her hands on Gabby ever again.

Kate left disgusted. She knew Sue would never tell her where her daughter is but Sue had slipped up. Blake caught it and was able to pass along to Garcia. The team guessed that Sue would want to prolong Kate’s suffering but they never would have though Sue would do what she did. Sue gave Gabby away on the internet.

It’s called re-homing and it’s not been made illegal yet. It’s happening all across the country. Adopted kids would be given away after the new parents realized they couldn’t handle it. People would approach them as happy families when in truth they were monsters seeking to get their hands on undocumented kids.

Tracing the re-homing forum, Garcia found out that Sue gave Gabby to a couple. But this woman if she can be called that also gave away Gabby. She didn’t want to get taken to jail after seeing the amber alert.

The woman gave Gabby to a couple. The woman has had all of her children removed from her care when one died in her custody. As for the guy planning to play dad, he has a lot of allegation attached to him and no arrests – the kids were too young.

By time the team located Gabby, she was unharmed. She and two other kids had just arrived to the house and nothing bad had happened to them.

Gabby was able to be reunited with her mother but JJ was fearful over the other two kids. Gabby gets to go to a happy home while they’ll get stuck in the system. It was heartbreaking that not everyone could get their happy ending. And for all the team knows, there could be plenty of children out there suffering the same fate Gabby had nearly missed out on.