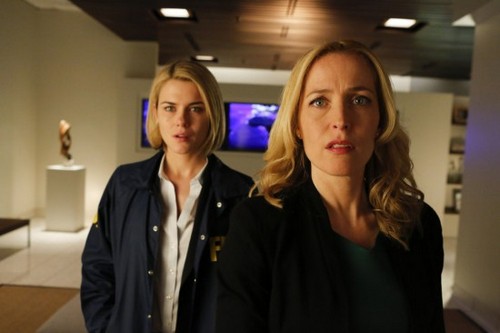 Tis the time of year for new shows to pop up on network television and tonight NBC is introducing us to CRISIS. The first hour is focused with immersing viewers into the action and getting a couple of major twists out of the way than delving into the depths of its major players.

Right off the bat a bus of children is taken hostage by a group of highly trained criminals while on a field trip. What do the bad guys want? It’s unclear. But the children’s parents all hold positions of power in Washington, D.C., ranging from the CEO of a major corporation (Gillian Anderson) to the president of the United States. There’s also a nearly unrecognizable Dermot Mulroney playing a parent chaperone who’s an embarrassment to his daughter, but who defies expectations when it comes to the events that unfold. And in a made-for-TV coincidence, the no-nonsense FBI agent in charge of the case, Susie Dunn (Rachael Taylor), is the estranged sister of Anderson’s character, Meg Fitch.

On tonight’s episode It’s field trip day for the students of Ballard High, a school that educates the children of Washington, D.C.’s elite, top-of-their-industry CEOs, international diplomats, political power players, even the President’s son. But when their bus is ambushed on a secluded rural road, the teenagers and their chaperones are taken, igniting a national crisis. Now, with some of the country’s most powerful parents at the mercy of one vengeful mastermind, the question arises: How far would you go and what would you become to ensure your child’s safe return?

Will CRISIS be another huge hit for NBC? Well we’ll have to tune in tonight at 10PM EST and we’ll find out together. We’ll be recapping all of the action live right here for you. The advance buzz on this show has been pretty good and old X-Files fans are always thrilled when Gillian Anderson pops up somewhere. Will you be checking out the action? Hit up the comments and let us know your thoughts!

The series premiere of this drama about a mastermind who draws Washington’s power players into a blackmail scheme and an international conspiracy. In the opening episode, high school students and their chaperones are kidnapped when their bus is ambushed.

As the bus is ready to leave for the field trip, they await the President’s son who arrives with agents in tow ensuring his safety. They finally head out with the agent’s around the bus. As Agent Finley sees a police road closure they get out of the SUV to talk to the police officers. Agent Finley questions why they didn’t get a call about it on the radio and the officers stay silent. He sees movement in the trees and realizes there is some kind of set up and draws his gun on the officers. HI partner Agent Hurse turns his gun on Finley and shoots him in the side as the officers, wearing masks, take over the bus.

The kids are ordered off the bus and into the back of a large, enclosed truck. Finley lies on the ground after being shot and watches as the kids walk past him. He sees one of the boys, Anton, sitting nearby, obviously in shock. As an officer approaches him telling him to get moving, Finley takes the opportunity to get up and run from behind knocking the fake officer out of the way, and grabbing the boy. They take off running into the woods. One of the armed men heads out after them while the others lock up the kids and chaperone into the truck.

Meanwhile Agent Dunn is briefing FBI Director Olsen on the latest details. He is going to a press conference about this kidnapping when he directs her on her next steps. She expresses concern about working on this case as her niece was on the bus. Olsen tells her she needs to work with her sister, Meg Fitch, who she no longer talks to. Olsen is clear, she now has direct orders to work with her.

The kids awake after being drugged. They realize Anton is not there and are scared about what may have been done to them. One of the chaperones, Gibson is asked to read a note from one of the masked men. He begins but is too shaken to finish, so Amber Fitch, daughter of Meg, reads the rest of the note. They are told that they are professionals and that they tried to be as careful as possible when removing the tracking devices their parents had implanted in their skin.

Back in the woods, Finley assures Anton they will not die after Anton becomes very concerned after hearing it is Finley’s first day on the job. Agent Dunn is fed to the sharks when she has to go in and provide the few details she can to the parents who are all worried about their children.

The kids begin talking (their abductors allowed them to talk in groups no larger than five) and after pointing the finger at the President’s son as the cause for being kidnapped, they soon realize that there are many kids with powerful parents that likely could have been the source of the reason for the kidnapping.

Dunn and Meg meet and decide to just be frank about their issues. Dunn assures Meg she is only there to save Amber and the rest of the kids. While talking, Dunn gets a call from Olsen. Beth Ann’s dad, who is also a chaperone, is a former CIA agent and comes up on their radar. Back at the hostage scene, Gibson, who is Beth Ann’s dad, talks to her on the side and tells her he has a plan to take over the gun from one of the men. She tells him not to do that for her. There is no going back, he has already been tracking the times they come through and he knows he can handle it.

One of the masked men walks through and he attempts to take his gun when they end up struggling. Beth Ann screams and tries going near him to help but is held back. He is told he broke the rules and a knife is taken out to cut off a finger. He screams in pain and they pull him away, looking as though they are taking him into another area possibly for more torture. But viewers soon find out that he is in on this and meets with the men he is working with in another room where they have several monitors everywhere. He asks them for an update on Anton. It looks like he may be the mastermind.

The news is playing as they each work on their computers monitoring to make sure they are not found. One of the men says that they cannot be one hundred percent certain they removed every child’s GPS implant. They realize they don’t have much time. The agent who shot Finley is with them, but chained and an obvious hostage as well. Amber looks at the camera and begs for the men to come out and tell Beth Ann how her father is. She won’t speak and is in shock. Gibson is affected after hearing this and seeing his daughter so distraught. The agent refers to the book that Gibson is holding which obviously is a well-planned guide for the entire event.

Back in the woods, Anton and Finley find a hideout but they are found shortly after and are told to come out. Anton is very scared as it seems they will have to surrender. Anton’s father was taken as well and he is in a remote location where he has a laptop and is talking on the phone being told step-by-step what he needs to do. He is very scared and unsure if he should follow their orders. They tell him to hit a button on the computer. After hesitating, he does it and there is an explosion nearby. Dunn arrives just after he hit the button but is unsure about what is going on. Mr. Roth, Anton’s dad makes it clear that he did not know what he just did by pressing the button.

The masked man goes into the shack after Anton and Finley. Finley recorded the sounds of breathing on the cell phone and placed it in a closet. When the man thought he found them and opened the closet, gun drawn, he was hit from behind from Finley and they fought for a while as Anton ran out. A shot is heard but Finley comes out to meet Anton. The other man is dead.

We find that the man who died is the brother of one of the men back at the hostage scene with Gibson. He is one of his cohorts. Dunn is seen questioning Anton’s dad. It seems he may know more than he initially shared.

The kids are being led upstairs. Gibson sees his daughter on camera being led out and recalls a talk with his former partner. It finally gives us some idea of why Gibson went rogue. Something he did not do was pinned on him and many died from it. He was told a sniper was on his daughter so he had no way to fight the injustice. We also find out that Agent Dunn is the true birth mother of Amber, Though Meg has been raising her as her own. She had her as a young teen. The first episode ends with Meg getting a call from Gibson (using a computerized voice) asking what she is willing to do to keep her daughter alive. She is told she cannot tell anyone about the call. She will clearly be conflicted as her sister is an FBI agent and she will obviously want to tell her so that she can use the information to help find Amber and the rest of the kids Tell us what you think about this new series!