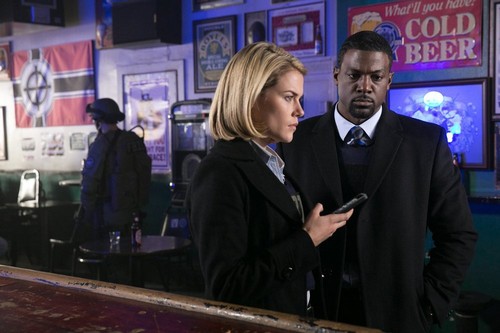 Tonight on NBC their new drama CRISIS airs with another new episode. If last week was any indication we are putting this on our must watch list. On tonight’s episode called, “Found” A startling discovery is made by Finley and Dunn. Meanwhile, Meg must testify about her ties to the secret-soldier program; and the search for the mansion heats up, leading Gibson to enlist an unlikely asset.

On last week’s episode when President Devore (guest star John Allen Nelson) payed a visit to FBI headquarters, Director Olsen (Michael Beach) allowed Dunn (Rachael Taylor) and Finley (Lance Gross) to share their theories on the kidnapping with him. Gibson (Dermot Mulroney) sent a parent on a mission that could bring the United States to war with China. At the mansion, Ian (Max Schneider) discovered the secret entrance to the kitchen command center and bore witness to something unthinkable. Stevie Lynn Jones also stars.  Did you watch last week’s episode?  If you missed it we have a full and detailed recap, right here for you.

On tonight’s episode as the FBI finally detects the location of the mansion, Finley (Lance Gross) and Dunn (Rachael Taylor) make a startling discovery and are led on a mission to find the father of one of the soldiers from the Pakistani embassy, who has been sent on a parent mission of his own. Elsewhere, Meg (Gillian Anderson) is forced to testify about her connection to the secret soldier program. Gibson (Dermot Mulroney) puts an unlikely asset to work as the search for them mansion intensifies. Stevie Lynn Jones, Halston Sage, Max Schneider, Max Martini and Michael Beach also star.

Tonight’s episode begins with Dunn and Finley being led into a barn by police to show them the dead body that was found. It is Jin’s body. Gibson coldly included a note on the dead body that read “My mother failed.” Dunn immediately feels a wave of guilt because she persuaded Jin’s mom to stop her mission, while Finley reminds her of what could have happened if they didn’t stop Jin’s mom.

Back at the mansion, after Jonas tells Gibson that his hands are tied and he cannot do anything to speed up the chemical process. Jonas looks at the monitor after Gibson is informed that it looks as though the FBI may be closing in on their location. Jonas gets very upset and questions Gibson on why they are still there. Gibson knows the pressure is on and makes a call to a bar where he knows he will be able to speak with a parent of one of the kidnapped children. He spent time in prison and Gibson knows how desperate he is to see his son again. Gibson tells the man the many private things he knows and the parent gets very agitated and begins to threaten him. Gibson gives him hope of seeing his son..along with a mission.

Meanwhile, at the mansion, we find out that Ian apparently did see Gibson as the shooter when he saw Jin get killed. He carefully tells Beth Ann about what he saw knowing she wouldn’t take it well, She is in disbelief and he hugs her. Beth Ann tells Ian he cannot tell anyone about this as she fears what could happen if her dad is actually on the other side.

Back at headquarters, Manning detects a call from the kidnappers. Though he cannot get the address for the outbound call, he has one for the recipient of the call and shortly after the FBI storm in and Dunn and Finley ask questions. They have the upper hand since the patrons seem to all have weapons and many are parolees but they are not easily offering any information. After a scuffle with the bartender, Finley grabs an envelope he had in his hand. It is a note from the parent, Buddy, who was the recipient of the phone call. It is somewhat of a goodbye and thank you letter to his friends at the bar. He is gone and is obviously now on a mission so the race is on to find him. As they head to leave Dunn find a half brick of explosives and knows this spells trouble.

Meanwhile at the mansion, Gibson tries getting information out of Jonas so that he can find the location of where Widener hides his soldiers. Jonas hesitantly provides Gibson with the information he needs to locate Jonas’ former lab assistant through his cell phone’s GPS. Gibson gets confirmation he found the location. Meg, meanwhile, meets with her lawyer for advice on how to handle her role in the Senate hearing on Widener. Meg calls Dunn in tears, convinced that Amber is next to die.

At the mansion, helicopters can be heard overhead. Jonas finishes the serum just in time. Gibson makes good on his promise to Koz and pays him the agreed-upon $25 million. Koz wants his money now. As Gibson loads the syringe, he calmly tells Jonas he is very scared. The kids spot the helicopters and become very excited. At FBI headquarters, XXXX wants to see a view into the mansion. An anxious Gibson injects Luke after Koz drags him into their room. Jonas begins to realize why Gibson wanted so much of the serum. He injects the entire amount of serum into Luke’s hand because he planned to smuggle it out of the mansion through Luke’s body.

Widener calls Meg and strongly recommends she listens to her attorney as he says it is the best advice. Just as her phone call ends, she sees news reports that the location has likely been located. Olsen is talking to the President on the phone and headquarters is crazy. At the mansion, Luke is brought back in with the kids. As the helicopters close in, Gibson asks Koz if everything is ready. When he confirms, Gibson calls Olsen to inform him that the mansion is rigged to explode upon his command and one of the victims is very sick and in need of medical attention. Luke is led out by a haz mat crew to a special quarantined area. Olsen tells him the kid must stay at the tent until CDC clears him. Dunn and Finley suit up to talk to the boy but he is upset and tells them his kidnapper told him they would tell him they were there to help,, but that no one can help him. They know they must find the parent. It comes to light that Gibson’s tech helper actually works for the other side.

Back at headquarters, Dunn receives a call that there was a match on the letter they recovered from the bar. She is filling in Finley as she gets the information over the phone. At the mansion, Gibson is thrown back with the kids and immediately tells Beth Ann that he tried to protect her. Finley tells Dunn what a good partner she’s been as they are interrupted when he is told a Humvee is waiting to take him to the mansion. Meanwhile, Buddy acts as a transporter for blood for Luke. In his van, he takes the cooler with the blood and places it in a bag on top of the other half of explosives that were missing from earlier.

We’ll see you right here next week as we recap another nail-biting episode!