BY Caryn Doti Chavez on May 26, 2014 | Comments: one comment
Related : Crisis, Recap, Television 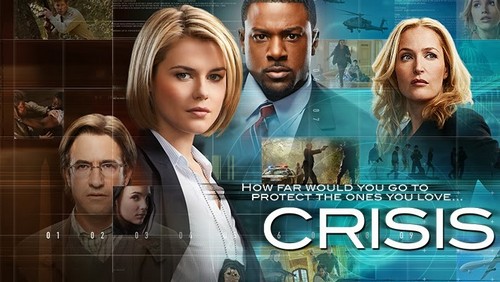 Tonight on NBC their new drama CRISIS airs with another new episode. If last week was any indication we are putting this on our must watch list. On tonight’s episode called, “You Do Not Know War” a parent mission could lead to war between the U.S. and China. Elsewhere, Dunn and Finley share their theories about the kidnapping with President Devore; and Ian discovers a secret entrance at the mansion, bearing witness to an unthinkable sight.

On last week’s episode the latest mission put Finley and Dunn’s lives on the line – Mark Valley, Fred Dryer and Arnold Vosloo guest starred — Dunn (Rachael Taylor) took extreme measures to protect Meg (Gillian Anderson). Meanwhile, Gibson (Dermot Mulroney) made a demand that could lead to the release of some of the students. As he became the focus of the next parent mission, Finley (Lance Gross) protected Gibson’s target from being captured by a desperate parent, Jakob Vries (guest starred Arnold Vosloo), who was also assigned to kill Finley. Stevie Lynn Jones, Halston Sage, Max Schneider, Max Martini, Michael Beach and James Lafferty also starred.  Did you watch last week’s episode?  If you missed it we have a full and detailed recap, right here for you.

On tonight’s episode When President Devore (guest star John Allen Nelson) pays a visit to FBI headquarters, Director Olsen (Michael Beach) allows Dunn (Rachael Taylor) and Finley (Lance Gross) to share their theories on the kidnapping with him. Gibson (Dermot Mulroney) sends a parent on a mission that could bring the United States to war with China. At the mansion, Ian (Max Schneider) discovers the secret entrance to the kitchen command center and bears witness to something unthinkable. Stevie Lynn Jones also stars.

Tonight’s episode begins with Olsen reviewing a newscast and getting an update. Meanwhile, a recently-released Emma is giving all the details she can to Finley and Dunn. As they take in all the information she is sharing, they tell her they’ll be showing her pictures in hopes she can identify the attacker.

Back at the mansion, Ian finds a secret room that gives him a view right into Gibson’s headquarters. Gibson knows his time is running out and he’s getting desperate. At FBI headquarters, Olsen tells Dunn and Finley to get ready to share a detailed update with the President, who is on his way.

Meanwhile, Gibson gives another parent a special mission. She responds on the phone that his request would incite a way with China. Despite this, she informs her husband that she is going to save their son by moving forward with the mission. Once the President arrives at FBI HQ, he is told that what he heard was correct. His son killed a man. After he catches his breath, Dunn and Finley fill him in and share that they believe their man is Gibson,

At the mansion, Gibson is happy to see Jonas. Jonas asks what he wants from him. Gibson tells him he will save his life because they can work together to get Widener before he can get to Jonas. Then they will both win.

At FBI headquarters, things are getting heated as Dunn and Finley stay confident in their theory that Gibson is their man, but just as Dunn is told to calm down, the power goes out. The President is told that there has been a massive cyber-attack and everything connected to the Internet is down. When Dunn is unclear about what she heard about the attack, Finley confirms, the code she heard means that the President will have to shut down th country before someone shuts it down for us. As they get more information, they begin to piece together what happened, They find it is a Chinese virus that has caused this shutdown. Finley tells the President about the parent who has ties to China, believing this is part of a parent mission.

Gibson starts plotting his escape and shares it with Beth Ann, but explains it differently so that she believes he is still a victim. Beth Ann talks to Jin, who tells her that he is going to be released. Beth Ann is doubtful and tells him the plan her dad has to help them, Jin begs her to wait until he gets out and tells her not to screw this up for him. She relents but tells him that he better not tell anyone about their plans if he does get out. Jin’s mother fulfilled her mission, and now must leave as her safety is at risk. She had made a video for Jin explaining everything and why she did what she did…to save his life. Dunn and Finley visit Jin’s home. While Jin’s father won’t give out any information on his wife’s whereabouts, his mother tells them what she knows. Dunn and Finley head to the location where Jin’s mother is supposed to be. He cohort sneaks in, armed, and ends up getting shot after pointing his gun at Finley. Dunn and Finley plan to rush him to the hospital to ensure he doesn’t die as he may be their only source of information.

As they drive him to the hospital, Dunn gives Olsen an update. Olsen tells the President that they must ask China for help or they will not find Jin’s mother, the spy. Olsen calls Dunn and Finley with the woman’s location. They head to a Chinese Government safe house. They know they must find her before she runs.

Olsen updates the President on the rising death toll as the country is under attack. Meanwhile, Dunn and Finley find their woman. She has a change of heart after Dunn begs her to do the right thing. When Gibson hears she didn’t fully execute. Gibson is angered and goes to get Jin, telling him his parents failed him. Jin cries as he realizes Gibson is responsible for the kidnappings. Gibson tells him he was forced to do this and pulls his gun out. As Jin begs for his life, Gibson is unfazed and shoots him. Ian sees Jin get shot through the hidden opening he found, but moves his head away before seeing Gibson as the shooter.

Olsen gives the President a positive update, telling him everything is being restored and things are getting back to normal. The President tells Abby that her husband is dead. She begs him to find her daughter. The President congratulates Dunn and Finley, tells Gabe he isn’t happy with him, and ends his talk with, “Find my son. Find all of them.”

Just then, Gabe gets a call from Gibson who is asking about what is going on. Gibson tells him that he is coming for him and to get ready to say goodbye to everything.

It is getting really intense now as Dunn and Finley are zeroing in on Gibson and the mansion. See you here next week for another recap as we build up to the dramatic series conclusion.