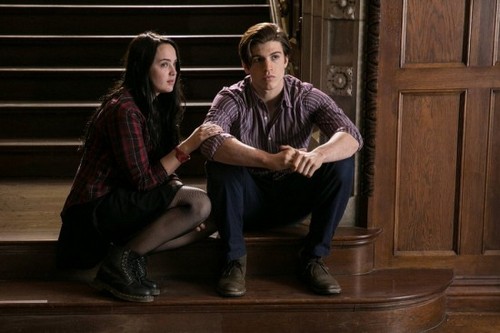 Tonight on NBC their new drama CRISIS airs with another new episode. If last week was any indication we are putting this on our must watch list. On tonight’s episode called, “Best Laid Plans” Finley enters the mansion as part of a hostage exchange. Elsewhere, Gibson focuses on his next target while implementing part of his plot to expose the soldier program.

On tonight’s episode Finley (Lance Gross) is forced to go inside the mansion as part of a hostage exchange. In an effort to trick the world into believing he is innocent, Gibson (Dermot Mulroney) takes extreme measures and sets his sight on a new target for his next parent mission. With Meg’s (Gillian Anderson) help, Gibson enacts a piece of his plan that will bring out the truth about the soldier program. Rachael Taylor, Stevie Lynn Jones, Halston Sage, Max Schneider, Max Martini, Michael Beach also star. Mark Valley, Melinda McGraw and Adam Miller guest star.

Will CRISIS be another huge hit for NBC? Well you’ll have to tune in tonight at 10PM EST and let us know what you think. We’ll be recapping all of the action right here for you. The advance buzz on this show has been pretty good and old X-Files fans are always thrilled when Gillian Anderson pops up somewhere. Will you be checking out the action? Hit up the comments and let us know your thoughts! In the meantime, check out a sneak peek of tonight’s episode below.

Tonight’s episode begins with Finley heading into the mansion as every step is being closely watched from both Gibson’s team and the FBI. Finley keeps saying to send the kids out. After releasing only five kids, they are told that no more will be released until the FBI is called off. Dunn and the rest of the team watch everything as they listen to the kidnappers’ demands. Gibson is still pretending to be a good guy. Finley is led in with his hands up and kicked down to the ground once he is with the kids. They take him to the kitchen and pretend they are “taking” Gibson back as well.

The President is about to lose his child, based on the threats of the kidnappers, the tainted blood from the sick boy is now likely at FBI headquarters, and there has been a security breach. As Dunn gets an update, she turns to an employee to as for the Senate hearing schedule, yet she has no idea, the woman she asks is the woman who is working for Gibson. Finley is tied up and trying to talk sense into the kidnappers via the camera on him. Buddy is told by Gibson to move forward on his mission. He is ready, but confirms that he will get his son back immediately after.

Surveillance shows Buddy placing something by the gate, it is believe to be an explosive and the woman who sees him yells to get out as an explosion occurs. Buddy gets the card to gain access to where his son is at. Hawkins, Buddy’s son gets on the phone. Gibson explains they’ve met before, but Hawkins remains by the book and asked for authentication so that he can move forward on the plans. He just gave himself a shot with the supposed cure for his sickness. He turns into what seems like a monster and asks Gibson who he needs to kill.

Meg gets a call from Gibson. When he attempts to give her another assignment, promising her daughter back safely in her arms, she questions why she should believe him. She tells him “I know this is you, Gibson. Everyone knows.” He keeps on as if she didn’t say anything. Meanwhile, the President’s son, Kyle, is called away from the group and is led down with Finley. Finley tries to make a move to get the gun from one of Gibson’s men, but his plan doesn’t work.

Olsen talks to the President and confirms his stance; he does not want to make a statement, and the Office cannot give into demands. Meanwhile, Meg seems to have fallen for Gibson’s promises again and gets Hawkins, who she doesn’t recognize at the time, access to the White House, He is able to get cleared and asks to speak with Meg alone. He hands her the transmitter she is to wear. Just then, she pauses to look into his eyes and says “Pharmaceuticals. You are one of them.” Hawkins confirms his identity to her and Meg puts more of the puzzle together declaring, “You are the weapon.”

Shortly after, Buddy is found dead and Hawkins is nowhere to be found, though we already know where he is. Kyle tells Finley about the guilt he feels over killing someone, but he explains his reasoning. As he talks, Finley is busy trying to help get them free. Just then, Gibson’s men come down to take Finley away and Kyle is left alone. While Dunn works to quarantine areas because of Hawkins and the tainted blood all around, Finley is brought to the kitchen where Gibson pretends to be held captive as well.

Finley isn’t buying it and gives up no information when told to do so. Finley is taken back and Gibson stands, visibly worried about his plans. Just then Meg’s voice can be heard from the transmitter and Gibson tells her that she was not to use it until in the hearing. She says there is not getting in without help.

Hawkins escorts Meg into the hearing. Just then Meg is called to answer allegations, and is only responding based on what Gibson is feeding her through the transmitter. She begins to talk about Widener’s role and exposes him based on every word being fed by Gibson. She was told if she does not say exactly what he tells her to, her daughter will die. Meg continues on, placing blame in Widener for the deaths of many innocent people.

When Meg is asked a question and fails to respond, Hawkins gets up and places a hand on Widener’s wife’s shoulder. Widener orders him to step away. He will not until Widener authenticates the orders. He finally does and everyone is in awe. Dunn comes in and orders Hawkins to his knees. He complies. Back at the mansion, Gibson and his men watch patiently as everything plays out. After Gibson sees the proof that Widener has been exposed, he tells his men to destroy his notebooks and walks back to the kitchen when Finley is brought in and tortured.

Kyle is brought in and on video. One of Gibson’s men places a gun to Kyle as he pleads for his life. They begin to count down and finally he pulls the trigger, but Gibson steps in front of Kyle and takes the bullet. Finley sees Gibson take the bullet to be the hero—that seems to be the plan for Finley to be brought there. As Dunn talks to Meg, Olsen calls Dunn and says that he has Amber on the line, she is safe and with him. Dunn hands her sister the phone and Meg gets to hear Amber’s voice.

As we wind down to the end of the season, and the series, every episode is critical. We’ll be sharing next week’s recap right here! Tell us what you thought about tonight’s episode.