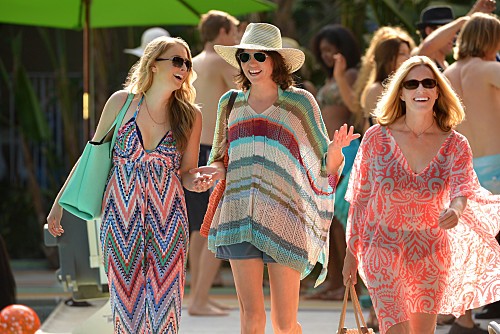 Tonight on CBS CSI: Crime Scene Investigation returns with an all new Sunday October 26, season 15 episode 5 called, “Girl Gone Wilder.”   This is the episode that was preempted from last week due to Football.  On tonight’s episode Morgan [Elisabeth Harnois], Sara [Jorja Fox] and Finlay [Elisabeth Shue] try to relax at a forensics conference, but their getaway is disrupted by a mass shooting that occurs on site.

On the episode to week’s ago, the CSI team suspected foul play when a chemistry teacher’s science experiment went horribly wrong. Did you watch the last episode? If you missed it, we have a full and detailed recap right here for you.

On tonight’s episode, Morgan, Sidle and Finlay try to relax at a forensics conference when a mass shooting occurs on site.  Guest cast tonight includes: Marc Vann (Conrad Ecklie), Gillian Vigman (Jane Snyder), Michael Landes (Mark Perlow), Hugh Scott (Cliff Ballard), Victor Mark Brown (Jeff Lasky) and Ron Del Barrio (SWAT Leader).
Tonight’s episode looks like it is going to be great and you won’t want to miss it, so be sure to tune in for our live coverage of CBS’s CSI: Crime Scene Investigation at 9:00 PM EST! While you wait for our recap hit the comments and let us know how excited you are about the new season.

The ladies are finally getting a break to enjoy themselves on tonight’s episode of CSI. Morgan, Sidle and Finlay all decided to go to a forensics conference. And because they had hours to kill before the conference began and during lectures – they penciled in some time to relax by the poolside, have a few drinks, and basically get down that night.

However their carefully laid plans of a girls’ weekend went up in smoke after they met a few people they both wish they hadn’t and were grateful they had. Sara ran into an old coworker of hers, Dr. Jane Snyder, who had switched sides and is now defending culprits Sara has personally help put in jail. So that reunion kind of put a damper on things. Sidle didn’t want to be near Jane and Morgan couldn’t wait to attend the other woman’s lecture.

As for Finlay, she ran into an old fling who soon took all of her attention away from the idea of having a girls only weekend.

Hence, Finlay wasn’t at Jane’s lecture. She was kind of busy at the time with Mark and that meant Morgan and Sidle were unfortunately free as a bird. So they went to Jane’s lecture. And later they ended up being the only team members at the lecture when a gunman came in and was just randomly shooting into the crowd.

And the gunman didn’t stop at one room. He continued traveling around the hotel where the conference was held and eventually he ran into Finlay. He tried to shoot at her in the elevator but her friend threw himself in front of her and took the bullet that would have hit her. Mark is injured and yet Finlay can’t get him the help he needs.

With a shooter on the loose, the hotel is on lockdown. Meaning no one in and no out!

And while the shooting at first appears to be chaotic, the gunman did in fact have a plan in place when he targeted that hotel on that particular day. Whoever this guy is, he’s methodical. He took out the security guard to the hotel a couple of days ago and the guys were actually investigating the recently found corpse back at the labs when they heard about the shooting.

Plus the gunman went out of his way to target certain individuals. Sure there was casualties but when given the choice the gunman did leave some people alone. Almost as if they didn’t matter. For example, when he was roaming the hotel he ran into two men and merely killed one of them.

The same thing happened with the conference rooms he targeted. He went into A and D but walked right passed the packed conferences rooms B and C. So he is going after a certain group of people. Though he still shouldn’t have targeted a forensic conference. Because with all the little gadgets around – one of them was bound to have picked him up on surveillance.

It was Mark’s device that picked up their shooter. The culprit’s name was Jeff Lasky and he didn’t last long once the SWAT team had him identified. They found him easily enough and when he raised his gun at them – he was easily taken down.

Jeff it seems used to be a family man and that all changed when his family was brutally murdered by a sex offender that would have been imprisoned years ago if Jane’s testimony hadn’t let him get off on a technicality. So the shooting was personal for Jeff. He blamed the people that let a known sex offender back on the street.

He wanted to kill Jane and he hadn’t made any sort of secret about it. He’s been sending death threats for months and if she had simply brought those threats to the cops’ notice – a lot of people would still be a live today.

But she shouldn’t get all the blame. Jeff it appears wasn’t the only shooter as the team found out when it was nearly too late. Someone was shooting people upstairs while Jeff was killing people downstairs. He was apparently working with someone. And the reason it was almost too late is that once Jeff was taken down – the building was cleared and Sidle began to move about freely.

While Jeff was killing people because of the family he lost, this other guy was targeting people he personally felt wronged him. Ballard used to work in forensics. That was until he was found to have been forging evidence.

A panel of doctors was created after he was first suspected of the crime and they were given the task to review his work. You know just to see how far Ballard went in his own little quest to lock up the bad guys. And what they found landed Ballard in jail. However he went on to gain parole and the moment he was free – he began targeting everyone that was on that panel who found him guilty.

Sidle was on that panel and Ballard had almost gotten to her at the hotel but thankfully SWAT was able to act quickly and take him down before he could. So no team member was harmed tonight yet they all were taught a valuable lesson.

Sidle had originally blamed Jane for the shooting and now maybe she knows she shouldn’t throw stones while living in a glass house. And Finlay might have even found herself a boyfriend. Mark, who was receiving proper medical care after his ordeal, ended up being just what she needed.