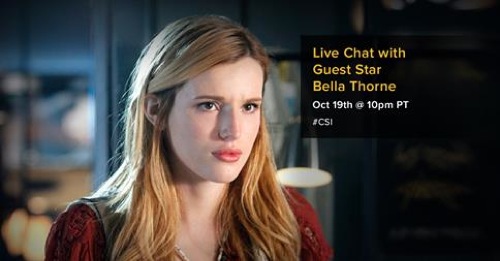 Tonight’s episode looks like it is going to be great and you won’t want to miss it, so be sure to tune in for our live coverage of CBS’s CSI: Crime Scene Investigation at 9:00 PM EST! While you wait for our recap hit the comments and let us know how excited you are about the new season.

It was normal day in a typical high school on tonight’s episode of CSI when out of nowhere a chemistry teacher was seen running for help while on fire. Unfortunately, the victim didn’t survive his burns and since of his profession involves working with chemicals– the firefighters and even the school officials came to believe the fire was an accident. After all the teacher was allegedly preparing the lab for a class he had later had that day. So it wasn’t that much of stretch to assume the fire was caused a mere miscalculation. Probably on the teacher’s end of things.

However once the Las Vegas CSI team was on the case, they noticed something worth an investigation. Like spotting what they assumed to be an accelerator at the scene.

The loveable teacher, the principle of the school kept going on about, was murdered. Possibly by one of his own students. And what they thought was an accelerator was actually cyanide that was used on the teacher to take him down. The poison made him crash into his experiments and the word “experiments” is being used because this particular teacher was using the lab at school for more than just High School chemistry.
The victim had some secrets of his own. He was later revealed to have been part of a secretive coven at school. Though he was supposed to have stopped dabbling in witchcraft the moment his coven threw him out of their little club.

It seemed he was getting too mouthy about who they were and what they’ve been doing so they kicked him out hoping he would finally shut up. But that’s not what happened. He refused to give up on his old lifestyle and even turned to dealing drugs in order to pay for everything. Like a real life version of Walter White with a Wiccan twist!

The teacher, Mr. Messener, was selling drugs to his students. Mostly steroids to help out the athletics team. So just when the team started to suspect one of his Messener’s students/buyers – another victim was found murdered. And the victim just happened to be the best suspect the team had.

Turk was his name. He was the quarterback on the football team and he was also the only intended victim. Messener had found some paper work belonging to a student that was out of place so being the neat freak he was – he decided to set his classroom straight. But the paper was craftily dosed in Cyanide. Hence someone was trying to kill Turk and accidentally killed Messener instead.

When he was alive, Turk wasn’t a nice guy. He had attacked one of his fellow classmates and so suspicion naturally fell on her. Though she wasn’t behind his death. She was at counselling. Apparently she needed it after Turk was done with her.

So the only suspect they had was the person Turk was sleeping with. That lady was later proven to be his very married principle who was also in the coven with Messener.

The coven fell under suspicion when the coroner realized someone had drawn blood out of Turk after he had died. In old Wiccan cultures, blood was used for certain spells. But while the principle wasn’t ultimately their killer – she knew what path to lead the cops on. She gave them her coven leader (the school janitor) and the leader’s cauldron still had potion brewing in it by time the police arrived.

A third coven member had brewed a potion that she thought was going to save her son. The earth science teacher had a son with cancer. So she used Turk’s blood, because she thought he wasn’t worthy and technically he wasn’t, in hopes of exchanging his life for her son’s.

But to do all of that she had killed two people and still lost her son in the process. Luckily, he was taken in by an old family friend. Though he’s going to be scarred for the rest of his life. No matter how short or long it may be!