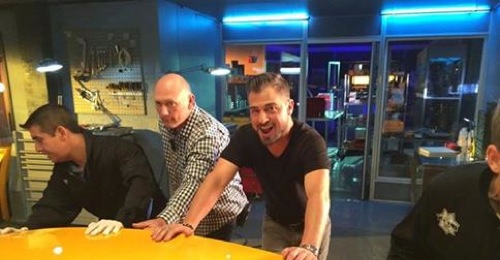 Tonight on CBS CSI: Crime Scene Investigation returns with an all new Sunday October 12, season 15 episode 3 called, “Bad Blood.” On tonight’s episode Sara [Jorja Fox] and Greg [Eric Szmanda] are quarantined after responding to the scene of a murder that is contaminated with a deadly pathogen.

On the last episode, a medical marijuana shop took a turn for the worse, the CSIs investigated a robbery and a murder that took place inside. Did you watch the last episode? If you missed it, we have a full and detailed recap right here for you.

It truly started off as a simply case. A tenant by the name of Jack Smith (an obvious alias) was found shot dead by his landlord. Police were called and moments later when the CSI team arrived on the scene – they couldn’t help noticing the entire apartment was covered in blood. Literally every inch of the place became their crime scene and in addition to that it was abnormal amount of blood for a mere gunshot wound. And there was just too much of it to have come from even a fight between their victim and possibly the assailant beforehand. So Sarah and Greg continued to look around and oddly their victim appeared to have bled out in only one area of the apartment which at first didn’t make sense to them.

However after Sarah and Greg saw the victim’s conspiracy wall. He appeared to have been a paranoid nut. As in he had an entire wall dedicated to deadly diseases including the black plague. And so Sarah started take an idea from her victim. She began to form a theory about all the reasons behind blood and though Greg didn’t like it – he had to agree with her that they could be facing a deadly pathogen!

Sarah couldn’t take any risks so she called in for an immediate decontamination. This also meant she and Greg had to be incubated until they were deemed fit. So not only were two members of the team abruptly pulled of the case but the only evidence they managed to collect before the CDC were called was a bunch of photos.

And the case still needed to be investigated. The victim was infected and his killer was exposed what was later identified as a scarier version of the Ebola virus during the crime. So they needed to find the killer prior to an outbreak occurring. He could be carrier of a virus with an 80 percent fatality rate.

The doctor that was called to help the team determine kind of virus they were looking at, Dr. Heather Lanning, also happened to be hiding some secrets. She knew Jack Smith and if she had merely decided information earlier – the team would have known that Jack Weaver (i.e. Jack Smith) was once a brilliant doctor that was let go after becoming too bitter on the job.

He was often sent into dangerous hot zones for viruses. And it was part of his job to observe the symptoms. Although, sometimes it got to be too much for him to sit back and watch disease kill innocent people.

So he was let go. And what would anyone do in Jack’s position after that? He was broke and the people he had once believed had turn their backs on him. There was really only one viable option left and that was to turn to the black market.

He must have broken into his former labs and stole vials of the virus. At least that’s the theory the team was working with. But someone had stolen the virus from him and it wasn’t his potential buyers. It was just some kid off the street.

The kid broke into Jack’s place and saw an expensive metal briefcase. So he took it and he didn’t stick around to see what would happen to its owner. Meanwhile Jack who was at the time already dying was killed by someone.

Besides that, a little digging into Lanning email revealed she had kept in contact with her former co-worker up to a week before he was murdered. He had asked to see her and she had voluntarily allowed him back into the labs. So while everyone is investigating Jack’s death – she was trying to cover up what she thought was Jack’s crime.

She thought Jack had stolen the pathogen from out of their labs using his meeting with her as a Trojan horse. But he wasn’t the one that stole the virus. The person behind the theft was actually another member at the labs.

Rudy Adela came from South America and he had lost family in the first outbreak of the virus. Though at the time his village was told people were simply dying from a high fever. The doctors on hand, Lanning and Jack, were told by their bosses to lie to the villagers and that’s exactly what they did. They pretended everything was fine and the death toll rose.

So years later when Rudy had found out what they soon after joining the company – he plotted his revenge. He stole the virus and he used it on Jack. And for a while he was going to pin the murder on Lanning. But he left behind evidence that pointed to him.

Sarah and Greg survived the virus but the kid that had unknowingly stolen the briefcase was exposed as well. And, sadly, he didn’t make it. So Rudy ended up killing two people because of his need for revenge.