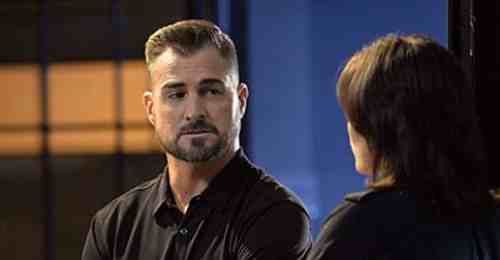 On the last episode,  a bomb was strapped to Finlay’s car and the puppet master behind this devastating crime merely wanted to make a game out of it. Finlay’s friends tried to figure who he was – to help her live. A few days prior to the bomb stand-off, Finlay and Russell had come upon a case that had reminded them of their dealings back in Seattle. It was a murder scene that showed all the signs of having already been processed by the CSI. Did you watch the last episode? If you missed it, we have a full and detailed recap right here for you.

On tonight’s show a medical marijuana shop takes a turn for the worse, the CSIs investigate a robbery and a murder that took place inside.

Tonight’s episode of CSI begins tonight with the owner of a marijuana store selling a customer some “purple diesel.” A woman walks in and begins acting strange. The owner’s cell phone ringing and she tells him to answer it now. He sees a video of his wife and kids bound and gagged on his phone. He asks the woman why she is doing this, and she tells him to check his text messages for instructions. After reading the message he fills a duffle bag with cash and hands it over the counter to the woman, she knows one of the glass jars of weed on the floor with her elbow, and the armed security guard at the shop asks what is going on. The woman panics when she sees the guard and reaches in to her pocket, he thinks she is reaching for a gun so the security guard shoots and kills her.

Sara and Nick arrive to process the crime scene. Whoever sent the messages used the kidnapped wife’s phone, so there is no way to trace the phone. And, the dead woman in the weed store, has no fingerprints. David shows Nick, the woman’s fingertips are completely smooth.

Sara tries to get some information from the owner of the weed store, Mr. Bryan. She says that whoever took his wife and kids may have been watching him for weeks and asks if there was anything out of the ordinary. He insists that everything was normal, his wife Deana left the house that morning to drop the kids off at school. Mr. Bryan leaves Nick explains that they still have nothing on the mystery woman, except a strange sticky substance on her shoes.

Julie finds Russell in his office staring at the Brisco and Winthrop board, he confesses that he is just waiting for another body to turn up and feels helpless. Julie says that they need to find a way to prove that the two brothers crossed paths before the murders. She volunteers to use her own personal vacation time to go to Seattle and do some digging in the foster care records.

Nick took some security tape footage from outside, and is sure that a black mustang had driven the mystery women to the weed shop. Meanwhile, they learn that the substance on her shoes was molasses, which is commonly used by marijuana growers.

Morgan visits Robbins in the coroner’s office. He reveals that the woman in the shop was a cancer patient, and medicinal marijuana user. She also had a tattoo removed, it was a gang tattoo, she used to be in the “Bridgewalk Devils.” They run her tattoo and get her arrest record and learn her name is Allison Ball. They head to her house and find out that she is now a pre-school teacher, and no longer involved in criminal activity. And, they find her phone and realize that either her boyfriend or brother was also kidnapped. She was told to go pick up the money from the weed store and he would be set free.

After doing some investigating they learn that the guy in Alison’s video is her little brother Stuart, the kidnappers sent her instructions telling her to go pick up the money or else they would kill her brother. Back at the lab, Hodges is analyzing all of the weed store owner Lloyd’s different types of marijuana. He reveals that the weed that Allison was smoking did not come from Lloyd’s store.

Greg returns to the office where Brody is going through all of Allison’s financial records. He says he stopped by her brother Stewart’s apartment and says that it was shady, he has no job or income but lives in a nice apartment with a huge TV and gaming system. Brody found something interesting as well, six weeks ago someone deposited $50,000.00 cash in to her bank account.

They get a break and are able to match Allison’s marijuana in the marijuana database to “Us 2 U Wellness.” They bring in the owner of the weed business named Calvin, and he reveals that he was in the gang with Allison, and his car matches the car that dropped her off at the weed store. He confesses that he gave her $50,000 to cover her cancer bills and they were best friends. She was scared about the video she got, so he agreed to driver her to the store to pick up the money. When he realized she was shot, he panicked and drove off. Calvin says that Allison’s brother Stuart was involved with some illegal bookies and running number for them, and Alison thought that was who may have taken him.

Sara gets a phone call and learns they found Stuart. She rushes to the scene and he is laying dead in the driver’s seat of a blue van, someone shot him to death. Brody and Sanders process the van, they realize that the shooter shot him from the back of the van and they found bullet lodged inside the van. They run the bullet through the database and find out that it belongs to a bookie named Remy, they bring him in for questioning. He confesses that Stuart works for him, but insists that he gave the gun to Stuart and doesn’t know anything about the kidnapping. He refuses to answer any questions, and demands to see his lawyer.

Nick receives a phone call and learns that Lloyd has disappeared and ran away from the cops that are babysitting him. They think that he has gone to pay the kidnappers, they find him in the park sitting in his car. He says he dropped the money off at the tennis courts like he was instructed, but they still havn’t brought his family. Nick explains this is why they didn’t want him to pay them, now his family is worth nothing, and the kidnappers will just kill them.

Brody and Hodges analyze the bird poop on the van that Stuart was found in and learn that it came from birds that feed on rainforest trees at t nearby casino resort, and the one cell phone ping they got Stuart’s phone before he was skilled both are within a fifteen minute radius of each other. Coincidentally, Remy owns property within the two areas. The CSI team rushes to Remy’s property to find Lloyd’s family and bring them back safely.