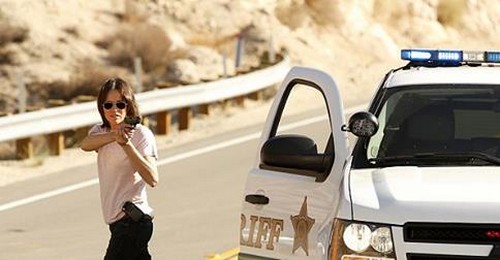 On the last episode, Morgan, Sidle and Finlay tried to relax at a forensics conference when a mass shooting occured on site.  Guest castincluded: Marc Vann (Conrad Ecklie), Gillian Vigman (Jane Snyder), Michael Landes (Mark Perlow), Hugh Scott (Cliff Ballard), Victor Mark Brown (Jeff Lasky) and Ron Del Barrio (SWAT Leader). Did you watch the last episode? If you missed it, we have a full and detailed recap right here for you

On tonight’s episode as per the CBS synopsis, “Frustration mounts for the CSI team as another victim surfaces and all evidence points to the Gig Harbor Killer. Guest stars include Mark-Paul Gosselaar as twins Jared Briscoe and Paul Winthrop, Mark Valley as Detective Daniel Shaw and Patricia Arquette as Avery Ryan.”

Special Update: CBS has decided to show last week’s episode 5 again rather than the new episode 6. You can check out our recap of this “Girl Gone Wilder” episode above.