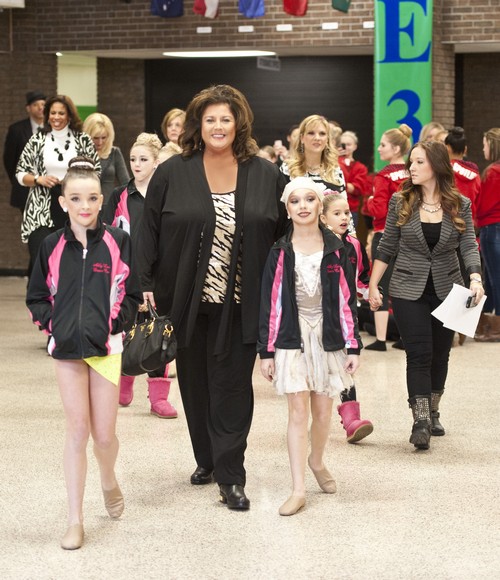 Tonight on lifetime Dance Moms continues with a new episode called, “Seeing Red.” On tonight’s episode, Abby and the mom’s gather to discuss their most memorable moments of the past year.

On last week’s episode “Dance Moms” 100th episode aired, Abby finally presented her new junior elite competition team during pyramid leaving the original team and moms were left in shock. With her new team in place, original dancers were pitted against new ones.  Did you watch last episode?  We did and we have a full and detailed recap right here for your enjoyment.

On tonight’s episode in after a season full of fights, losses, and heartbreak, Abby and the moms gather to discuss the most memorable moments of the past year. Abby discusses the pain of losing her mother, while Kelly’s expulsion from the team is still fresh in Christi’s mind. Soon, old wounds are re-opened and everyone is “seeing red.”

Tonight’s episode is going to be another drama packed one, which you won’t want to miss. So be sure to tune in for our live coverage of Lifetime’s Dance Mom’s Season 4 Episode 17 – tonight at 9 PM EST! While you wait for our recap, hit the comments and let us know how excited you are about the new season of Dance Moms tonight.

Tonight’s Dance Moms Reunion show kicks off with a brief interview with Abby Lee Miller. She speaks about her Mom’s death and explains that she laid her to rest in Miami with her Dad and Broadway Baby (her stuffed dog). Next she discusses the infamous fight with Kelly. Abby says it is one thing to scream and yell and speak with a tainted tongue, but when you physically touch somebody it is “a whole different story.”

Christi joins Abby on stage, she says that she feels closer to the other Moms since Kelly has left because now they understand what her and Kelly were always going through. Christi says that Abby doesn’t care about Chloe. Abby says that isn’t the case, she thinks she is a beautiful dancer and a beautiful kid. Christi disagrees and says everyone in America sees how Abby treats Chloe on TV.

After Chloe’s dance the host Jeff asks Abby why she hasn’t brought any dancers in to compete against Maddie- like she has all of the other dances. Christi says that Abby won’t put Maddie against any other dancers or against Kalani because she doesn’t want Maddie to ever lose.

Next they discuss the competition between Melissa and Christi. Christi says that Melissa and Abby are teaching Maddie to lie at such a young age. Melissa joins them on the stage to discuss her beef with Christi. Christi storms off stage and says she is “done fighting Abby alone” and she brings back Jill and Holly to join her on the couch.

Melissa says that she never taught Maddie to lie. When Chloe asked Maddie about a solo she was performing at a competition, Maddie flat out said she wasn’t dancing-which was a lie. The dance moms think that Abby and Melissa told her to lie about the solo. Melissa says it was a compete misunderstanding, and she asked Abby at the last minute if Maddie could dance, the other Moms aren’t buying it though.

Jeff addresses when Jill accused Christi of switching the line up during a competition at the last minute and having Chloe go ahead of Kendall. Christi insists that she wasn’t intentionally being malicious. Jeff asks Abby why during one episode she took Nia out of a group dance at the last minute. Abby blames dropping Nia from the group dance on lack of costumes, and she wanted her to concentrate on her solo that week. The Moms think it is ridiculous that there are shortages of costumes and it is all their responsibilities to make the costumes. Holly begins screaming at Abby and asking her why Nia has to do “either a solo or a group dance,” since none of the other dancers have to do either a group dance or a solo.

Next Jeff brings up Leslie, Abby’s least favorite dance Mom. Abby says Leslie is “cray cray,” and then Jeff brings her out on stage. They review the clip of when Leslie was cursing Abby out said the “f word” and Abby kicked her off the team. Leslie apologizes for what she said, but doesn’t think that Abby should get away with half of the things that she says.

Maddie takes the stage next and performs her favorite tap solo titled “Game of Love.”

Jeff brings Abby’s nemesis Kathy (Candy Apples) out on stage next. Kathy says that she thinks Abby’s routines are “elementary” and compares them to synchronized swimmers. Jeff asks Kathy why she pulled her group dance when they were up against Abby’s team and she says she just “doesn’t think they were ready.” Jeff points out that a week later, they apparently still weren’t ready because they performed the routine and still lost. Kathy says she won’t be giving up any time soon, because she likes “ruffling Abby’s feathers.”

Next the Abby Lee Dance Co. performs a group dance called “The Witches Of East Canton,” which was inspired by Kathy. Afterwards Kathy brags that Abby clearly worries about her a “whole lot more than she worries about Abby.” Jeff asks Abby what she thinks, and Abby says she thinks without her Kathy wouldn’t get a paycheck.

Jeff brings Kira out to join the reunion, Kira says over all her and Kalani are loving dancing for Abby and the Moms have welcomed her with open arms. Kira says that she thinks that Kalani’s arrival and duet had nothing to do with Kelly and Abby’s fight. Christi disagrees she thinks that Abby’s ultimate goal was to kick out Brooke and Paige and replace them Kalani.

Speaking of new kids – Jeff asks Abby about her new girls possibly joining the team. Abby admits she plans to compete her new team instead of her old team at times. Jill thinks it is just going to add more unnecessary stress to their girls. Abby points out that the day that Kalani joined the team, all of the girls started pushing and working harder. Holly thinks they began working harder because they lost Paige and Brooke and were scared they may be next. Regardless we will be seeing more of Abby’s “new team” when Dance Moms returns.