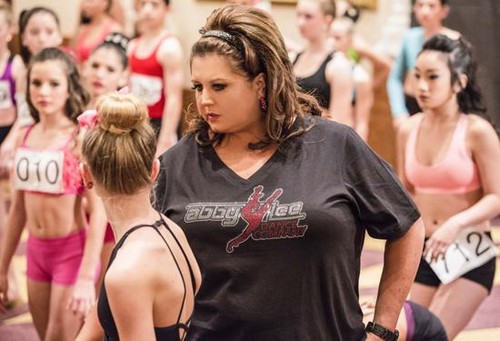 Tonight on lifetime Dance Moms continues with a new episode called, “Presenting My New Team.”  On tonight’ episode Abby presents her new junior elite competition team during pyramid, which shocks the original squad and their moms. With the new troupe in place, original dancers are pitted against their new counterparts.

On last week’s episode Melissa took control during Mackenzie’s music video shoot, but the power quickly went to her head. After racking up 13 wins in a row, the pressure was on the Abby Lee Dance Company to continue their stellar winning streak. All the dances last week were in tribute to Abby’s ailing mother and emotions were high.  Did you watch last week’s episode?  We did and we have a full recap, right here.

On tonight’s episode in “Dance Moms” 100th episode, Abby finally presents her new junior elite competition team during pyramid leaving the original team and moms in shock. With her new team in place, original dancers are pitted against new ones.

Tonight’s episode is going to be another drama packed one, which you won’t want to miss. So be sure to tune in for our live coverage of Lifetime’s Dance Mom’s Season 4 Episode 16 – tonight at 9 PM EST! While you wait for our recap, hit the comments and let us know how excited you are about the new season  of Dance Moms tonight.

Now, Abby has a shock for the girls. She has brought in her new dance team and she wants them to compete against them for their positions. Abby tells them to take a deep breath because their lives are about to change and then she parades six new dancers into the room. Kalani’s Mom Kira is furious to see that one of the dancers is from her old studio and calls them “trash.” Abby introduces all of the new dancers and then reveals which one will be competing against her dancers. Maddie will be competing with the new team.

Abby and the girls hit the dance floor and she begins teaching them the choreography for their group dance. She teaches them the choreography to the song “Royals” by Lorde. The Moms head up to their booth to watch the girls dance, they are shocked when all of the new team’s Moms head up to their booth. Jill, Kira, and Kristy storm out and refuse to sit with the new Moms.

Abby calls all the Moms down to the dance studio. She reveals to all of the Moms what each dancer and group dance needs to work on. One of the new Moms named Christy already begins arguing with Abby and causing drama.

It’s two days until the competition and Abby is teaching Kalani and Kendall the choreography to their duet dance. Jill, Kira, Holly, and Kristy are outside arguing with Abby’s new Moms. Abby is trying to plan her Mom’s funeral and teach two group dances, two duet dances, and two solo dances in one week.

The new Moms decide to bond and head out for drinks after rehearsal. Melissa, Kristy, Jill, Holly, and Kira decide to head to the restaurant and crash their Girls’ night. Within minutes they all wind up in a screaming match. Kira winds up cornering Tracy (the Mom from her old studio) and screaming at her over which one’s daughter was a better dancer. Tracy runs out sobbing.

It’s finally the day of the competition. Abby loads both of her teams and their Moms into the bus and they head to the competition. Abby reminds her old team that if they want to remain on her team they need to win. Abby’s first duet takes the stage, her two new girls Ava and Sarah. Abby seems pleased with their performance. Kendall and Kalani perform their duet next, titled “Rule The World.” Kira thinks that Kalani was amazing.

Now, it is time for the dancer’s solos. New girl Cameron takes the stage and performs her solo first, and afterwards Abby raves about how amazing she was. Next Chloe performs her solo, and her Mom Christi is nervous for her because there is a lot at stake. Surprisingly Abby thinks that Chloe danced “liked a pro.”

All of Abby’s dancers, new and old head to dressing room. She congratulates all of the dancers on their awards and then excuses herself. She has to fly to Miami for her Mom’s funeral.

Abby doesn’t reveal if any of the dancers have been cut from her team or replaced yet.