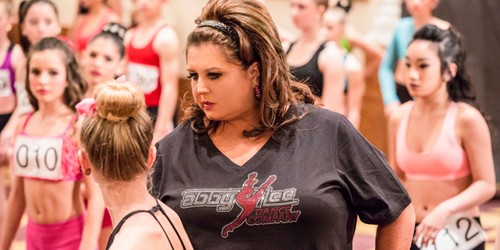 Tonight we will ring in the New Year with the Season 4 premiere of DANCE MOMS called, “Welcome Back…Now Don’t Get Too Comfy.”  On tonight’s show it begins with Abby holding open call auditions across the country to find new dancers.  Did you watch tonight’s special reunion show?  If you want to get caught up you can read our full and detailed recap, right here.

Its a New Year…New Team?  What Abby Lee Miller says, goes and when she says, “everyone is replaceable,” she means it!  For the fourth season of Lifetime’s hit docuseries Dance Moms, Abby will take to the road with a national scouting tour in search for the country’s most elite young dancers.  With the threat of new dancers coming into the company, the dance moms will stop at nothing to make sure their girls have a place to shine on stage, even if it means going up against Abby.

On tonight’s premiere episode it’s a new dance season for the Abby Lee Dance Company and Abby drops a bombshell, she will be holding open call auditions across the country searching for new dancers…and nobody’s place on the team is safe. Brooke has a big break when Country Star Jana Kramer invites her up on stage to sing.

Tonight’s episode is going to be another drama packed one, which you won’t want to miss. So be sure to tune in for our live coverage of Lifetime’s Dance Mom’s Season 4 Premiere – tonight at 9PM EST! While you wait for our recap, hit the comments and let us know how excited you are about the new season  of Dance Moms tonight.

The season premiere of Dance Moms picks up right after the nationals. Christi and her daughter have just returned to the team, and Christi has declared she is going to “stay out of the Mama drama.”

It is the first day back of the dance season. Abby Lee reveals her latest dance pyramid. The bottom four dancers are Nia, Brooke, Peyton, and Chloe. The second tier is made up of Paige, Mackenzie, and Kendall. Abbie changes her mind and switches Kendall to the bottom tier and places Nia in the second position. Kendall’s Mom is not happy about the switch. Abbie states she made the switch because Kendall didn’t attend Booty Camp. And the top of the period is obviously Maddie. Abby announces that the team will be travelling to West Virginia, and Nia and Maddie will be performing solos. Paige, Chloe, and Kendall will be performing a trio dance. They have three days to prepare for the competition. The Moms head upstairs while Abby and the girls begin rehearsing their group dance.

The name of their group performance is “Girls Night Out.” Peyton and Chloe will be reenacting the fight between their Moms in New Orleans that got them kicked out of nationals.

Brooke is late to rehearsal. She is with her music producer, she just got invited to sing at a country singer’s concert. Brooke’s Mom Kelly brags to the other Moms that Brooke got this invite all on her own and it has nothing to do with Abby. But, Abby calls her out on her lie and reads an email out loud that she received regarding the concert. The only reason Brooke was invited to sing is because the singer knows Abby Lee. Brooke finally arrives to dance rehearsal. Abby isn’t happy that Brooke is late. Meanwhile upstairs Kelly and Leslie are bickering over whether Peyton or Brooke are better than each other.

All of the dancers head out of rehearsal early to go to country singer Jana Kramer’s concert to see Brooke sing. Brooke is nervous, and Kelly is afraid she will forget the words. Kelly thinks that she did amazing and she is happy that Brooke is reaching for what she wants, “without her dance teacher.”

It’s the final day of rehearsal before the team heads to West Virginia and performs. The Moms are freaking out, they haven’t even learned the trio dance yet or gotten their costumes for tomorrow. Kendall’s Mom Jill is still bitter that Kendall’s solo went to Nia, but she is happy she still gets to perform in the trio with Chloe and Paige.

It’s the day of competition in West Virginia. Abby is excited because there was a crowd waiting for her outside and chanting her name, she says she “feels like Justin Bieber.” Once they are inside Abby hands out the girls’ costumes for the competition.

After the solos Abby reminds all of the Moms and her dancers that she is scouting new talent and she is looking for a new permanent dancer. Chloe’s Mom is afraid she is looking for someone to replace Chloe. Peyton starts crying and having a meltdown over her hair piece to her costume. Abby is disgusted, Peyton is the oldest member of the team, she is 16, and blubbering like a baby. Abby tells the parents that she has “four girls out in the hallway waiting to replace them,” then she tells Peyton to “stop crying like a baby.” Once Abby gets done screaming at her team they take the stage for their group performance. Abby is in the audience and clearly not happy, she shakes her head and rolls her eyes throughout the whole performance.

Abby says their group performance was a “hot mess,” and she thinks Brooke should “stick to singing.” Chloe, Paige, and Kendall win first place for their trio dance. Maddie takes first place in the solo competition, but Nia doesn’t even place in the top five. Abby Lee’s team takes third place in the group competition. Abby is disgusted, she says her “team failed.”

They head backstage after the awards ceremony and Abby and Kelly begin arguing. Abby thinks Brooke cost them the competition, and she says Brooke has gotten nowhere because “her Mom is a bitch.” Abby announces that next week the team will be traveling to Ohio.