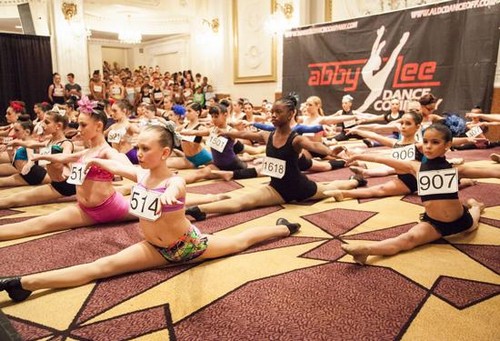 Tonight on lifetime DANCE MOMS continues with a new episode called, “Big Trouble in the Big Apple.”  On tonight’s show Abby holds her final open casting call in New York and announces that she is putting together a new all-star, junior elite team to rival her own girls.  Did you watch last week’s sixth episode?  If you want to get caught up you can read our full and detailed recap, right here.

On last week’s episode the moms are shocked when Abby brought a new dancer named Chloe in for a trial run on the competition team. Christi’s concerned Abby would replace her daughter as the two Chloes went head-to-head. While Holly and Jill were excited about their daughters’ duet, Abby’s was more excited about rehearsing the new Chloe. And for the first time, Melissa felt her girls were being overshadowed.

On tonight’s episode with her final open casting call in NY, Abby announces that she’s putting together an entirely new all-star, junior elite team to rival her own girls. The Abby Lee Dance Company has two competitions this week and Paige has more dances than ever. Abby will do anything to win and makes a bold decision, leading to a clash with Dance Mom Kelly.

Tonight’s episode is going to be another drama packed one, which you won’t want to miss. So be sure to tune in for our live coverage of Lifetime’s Dance Mom’s Season 4 Episode 7 – tonight at 9PM EST! While you wait for our recap, hit the comments and let us know how excited you are about the new season  of Dance Moms tonight.

Abby was disappointed with the Abby Lee’s Dance Company’s results. They only managed to come in first in one category. That’s sounds like a failure to Abby. So Jill points out that it might had something to do with the New Chloe. Didn’t Abby spend most of her time training with the girl only for her to come in second? Meanwhile her own daughter and Nia only had 17 minutes of practice and still came in third. But Abby refuses to put any blame on New Chloe. Instead she said that the failures gave her a new idea.

Abby was originally looking to replace at least one girl on her dance team but she’s changed her mind. Now she wants to create a whole new team for Junior dancers. She’s having her third open call this week and Abby knows what she’s looking for. She wants to create an elite team and the only member guaranteed from the old team to have a place on the new one is Maddie.

The pyramid this week finally offers up some good news. The bottom row is Chloe, Kendall, Mackenzie and Nia. The second tier consists of Brooke and Paige while the top of pyramid naturally goes to Maddie. This is an overall improvement for Kelly’s daughters. It’s become a rule for Brooke and Paige to generally get shafted by Abby. But Kelly soon regrets how far her children climbed up the pyramid.

Both of her daughters are getting solos and they will be in the group dance. Except for Paige that is. Paige also has a duet with Chloe on top of her other dances. Kelly doesn’t want to complain however she feels like her daughter is being set up to fail. And she might have a point. Abby constantly remind the girls that they’re replaceable even during practice.

Later on, Abby asked Paige and Chloe to help out in auditions. She didn’t give them the routine and so it seemed like the girls were forced to try out with everyone else’s. Again the mother didn’t say anything directly to Abby. They chose to exchange words backstage rather than confront Abby with her biasness. Abby doesn’t treat these girls fairly and the main reason why they were given the dances was because Maddie and her other dancers were competing in another competition this week.

The group dance is aptly named Beautiful Revenge because Abby hated losing the last time they were in New York. She wants her to get first place so she could get her beautiful revenge. And yet if she really wanted her girls to win then she should have laid off of them for once. At one point Chloe broke down in tears. That’s how scared she was about losing her position.

They were right to be worried. The other competition that took Maddie and Kalani’s time was apparently a great performance. So great in fact that Abby wanted the girls to do it again in New York. Abby wants to win and he doesn’t feel like Chloe and Paige can give her that. Without the kids knowing, Maddie and Kalani did their duet onstage. Which made Kelly and Christi extremely angry. They’re mad that Melissa didn’t forewarn them.

Melissa honestly didn’t know what Abby was going to do but she did ask her to not have Maddie’s dance scored. She knew it wouldn’t be fair. After the dance; Melissa tried to explain her position but the other mothers just believe she’s lying and that she got her daughter to lie. Earlier, Chloe asked Maddie if she was going to dance and Maddie said no. Now Chloe is hurt and her mother isn’t making better by saying “now you know who your friends are”. It made Maddie question if she still had Chloe as a friend.

Backstage, the situation becomes worse. Thanks mostly to Abby’s actions. She brought Kalani and Kanlani’s mother with her to the dressing room. She was introducing the girls and had said that Kalani was a great fit and that she’ll become part of the team. Well, Kelly was already riled up and said why don’t you replace Brooke then. Abby had made comments about Brooke’s drawn face and she did question Kalani by asking her if she happens to know the group routine.

The women were at boiling point when Kelly began to wag her fingers and Abby was threating to bit the fingers if it wasn’t removed out of her face. This is what leads to Kelly slapping Abby and pulling her hair.

The other mothers quickly evacuated the children after the first slap. Then they made sure to pack up Kelly’s stuff. Abby had left the room to call the cops and the mothers knew they had to get Kelly out of there before the police arrived.

With Kelly and her girls gone, Abby has to re-work the group dance. It doesn’t matter what happened between the adults; the dancers were taught to be professional and to always keep up. And the girls were able to still pull off an a beautiful performance.

Although its pure luck that Kelly and her family were there for judging. Her kids in 4th and 5th place for their solos. Paige’s duet with Chloe came in second to Maddie and Kalani. As for the group dance, the company once again won first place. All this does is cement Abby’s decisions. She’s surer than ever that she should the dead weight.