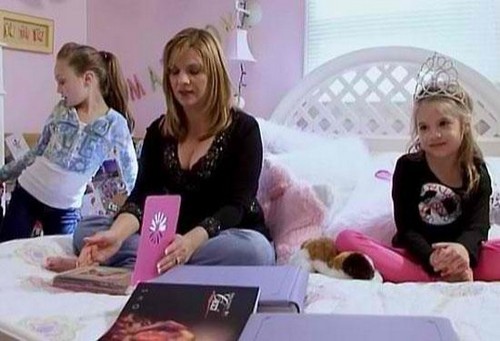 Tonight on lifetime DANCE MOMS continues with a new episode called, “Clash of the Chloes.”  On tonight’s show for the first time, Melissa feels her girls are being overshadowed.  Did you watch last week’s fifth episode?  If you want to get caught up you can read our full and detailed recap, right here.

On last week’s episode Holly was worried about Nia’s featured role in the group dance. Abby’s second open call audition had all the moms and girls on edge. Meanwhile, Melissa found herself on the defensive when the other moms attacked her choice to home school Maddie and Mackenzie.

On tonight’s episode the moms are shocked when Abby brings a new dancer named Chloe in for a trial run on the competition team. Christi’s concerned Abby will replace her daughter as the two Chloes go head-to-head. While Holly and Jill are excited about their daughters’ duet, Abby’s more excited about rehearsing the new Chloe. And for the first time, Melissa feels her girls are being overshadowed.

Tonight’s episode is going to be another drama packed one, which you won’t want to miss. So be sure to tune in for our live coverage of Lifetime’s Dance Mom’s Season 4 Episode 6 – tonight at 9PM EST! While you wait for our recap, hit the comments and let us know how excited you are about the new season  of Dance Moms tonight.

The girls have once again swept most of their divisions. They’ve done nothing but win for the last several weeks all the while their coach, Abby, was holding open auditions. It seems winning wasn’t enough for Abby to ease off on all her replacement plans? And she actually got further along with her plans that everyone thought.

Abby began this week’s meeting by introducing a new dancer. Her name or better yet what Abby chose to call her is “New” Chloe. She had impressed Abby so well that Abby invited her to dance with her girls New Chloe is temporary although everyone knows who she’ll be replacing. That is if she can keep up.

This week’s pyramid holds plenty of surprises. On the bottom row are Mackenzie, Brooke, Paige, and Kendall. Mackenzie hadn’t won in her division while the other girls weren’t able to put their best foot forward. On the second tier there is Chloe, New Chloe, Maddie. New Chloe hasn’t even danced yet and somehow she ended up on the second tier above the other girls. While the overall top winner is Nia.

Holly was so pleased her daughter was first place this week but she was soon disappointed. Nia won’t be given a solo despite her last week win. Instead she’s been given a duet with Kendall. As for solos; those will go to Chloe and New Chloe. Abby wants to see who will come out top dog with the Chloes that she may overexert herself.

New Chloe’s mother, Kim, is just not fitting in. For some reasons new Dance Moms always feel like they got to push their daughter to the head of the pack. That’s what New Chloe’s mom. She couldn’t help herself really – she told all the other moms how her daughter was the star in her other dance company. And she might be showing excitement but no one can tell. Kim works at a plastic surgery office and looks like she was the spokes model that went wrong.

Another thing to learn about Kim is that she’s semi-delusional. She thinks her daughter is so great that she hasn’t acknowledged any of New Chloe’s mistakes. All the girls have to be synchronized for the group number and New Chloe simply isn’t keeping up. The same goes for her solo as well. Abby has to use up a lot of time just to teach her the basics that she didn’t have enough Nia and Kendall.

By time the duet was supposed to practice then there were out of time. Abby said the girls were messing up on things they should already know. So Abby wants to pull the duet. The girls’ mothers on the other hand want to fight to keep it. The girls only have 17 minutes but they’re going to do this duet. Their daughters were shafted because of New Chloe. And no even likes Kim.

Up in the waiting area, Kim had taken a phone call from her daughter’s former coach. She put him on speaker so that the other mothers could hear their conversation. Kim wanted them to hear what the former coach thought about Abby’s Dance. He called them all names and basically said they were second rate. Then he asked Kim if her daughter dancing circles around the girls and Kim the dummy said “yes”. Why say that out loud.

Kim continues to become a nuisance at the competition. She has no idea how to prepare her own daughter for a show. Melissa had to show her what to do.

Nia and Kendall may not have gotten their proper dues this week but they still managed to do an ok job on their duets. Abby was whining and make remarks backstage and still they didn’t let that affect their performance. It was neither their best nor their worst.

Original Chloe went up first and she did a great job. Better than she usual does and that’s coming from her mother. Christi believes the New Chloe lit a fire under her daughter. So as the original proved herself; the replacement turned out to be a disappointment. Her hair piece fell off. Kim was supposed to have sewn it in but once the piece fell off and she knew Abby would get mad at her she then tried to place blame elsewhere. She said her daughter was sabotaged.

Kim knows her daughter might have lost her chance to dance for Abby and took out her anger on the other moms. She said she didn’t know if Pittsburg is the right choice. She feels like she’s slumming it with Abby. That made the mothers turn against her and that made Abby go against her.

Overall this week’s competition was one of the biggest failures for Abby. The duet didn’t place and New Chloe came in second for her. Original Chloe, for all her troubles, came in fourth. The only first place win was the group dance.

This is why Abby wants to replace everyone!