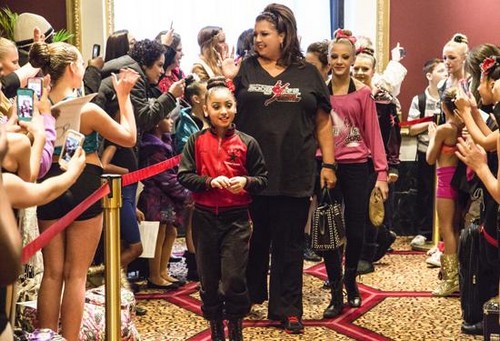 Tonight on lifetime DANCE MOMS continues with a new episode called, “No One is Safe.”  On tonight’s show Melissa finds herself on the defensive when the other moms attack her choice to homeschool Maddie and Mackenzie..  Did you watch last week’s third episode?  If you want to get caught up you can read our full and detailed recap, right here.

On last week’s episode Cathy was back and ready to beat Abby with a new team of boys. Abby was nervous and pushed her team, especially Chloe and Kendall, who were dancing solos head-to-head for the second time this season. With another round of open call auditions looming, every team member felt the pressure to prove to Abby that they belonged at the Abby Lee Dance Company.

On tonight’s episode Holly is worried about Nia’s featured role in the group dance. Abby’s second open call audition has all the moms and girls on edge. Meanwhile, Melissa finds herself on the defensive when the other moms attack her choice to homeschool Maddie and Mackenzie.

Tonight’s episode is going to be another drama packed one, which you won’t want to miss. So be sure to tune in for our live coverage of Lifetime’s Dance Mom’s Season 4 Episode 5 – tonight at 9PM EST! While you wait for our recap, hit the comments and let us know how excited you are about the new season  of Dance Moms tonight.

On tonight’s episode of Dance Moms, part two of the dreaded auditions are finally underway. Melissa is already hoping to give her girls an edge by pulling them out of normal school in order to have them homeschooled. This will allow them to practice more which will make Abby happy. Jill likes the idea and thinks maybe she should pull Kendall out of school as well. According to this week’s pyramid, maybe she should.

This week pyramid has Kendall, Brooke, her sister Paige, and Mackenzie in the bottom tier. Meanwhile Nia and Maddie of all people were on the second tier. It seems no one could have touched Chloe’s flawless performance that allowed her to sweep her division. Anyways it’s been a while since Chloe has been on top of the pyramid. Her mother can’t help being proud her daughter for reclaiming the coveted spot.

As for the other mothers, they’re all trying to find a way to butter Abby up before the auditions. Holly has offered to help at the try-outs. She wants to be able to keep a close eye on Abby. Melissa volunteered herself and her girls to help. Melissa will be selling Abby’s dance products while Maddie has to dance alongside the competitors.

This week’s group dance could be controversial.  Abby wanted to do a dance on civil rights and naturally Nia is given the lead. But Holly is apprehensive about the whole thing. She hopes her daughter is being type cast as the only black girl on the team and at the same time she’s wondering if the dance will even be tasteful. Frankly, the other mothers are surprised Holly didn’t say anything. They’re wondering if the usually talkative mother is biting her tongue as long as Nia gets the lead.

Chloe, Paige, and Kendall were given a trio. Abby wants them to be southern belles for their dance and without her knowing, the mother have begun to make fun of her for being so excited. If Abby thought she was in any way a southern belle then all she has to do is listen to the mothers talk about her manners. Apparently their so appalling that they’re actually disgusting.

Maddie was given a ballet solo this week. Maddie is really good at it and the mothers just happen to mention how well Melissa’s daughter has gotten since homeschooling. They feel like Melissa has become so obsessed with her daughters dancing that she brings her kids to the dance school probably every day. Melissa tried to deny these rumors but the proof is in the pudding. At least that’s what Abby thinks. Abby loves homeschooling and she feels with it Chloe will be great all the time. Abby spoke to Christi. Christi never really liked the idea but she was willing to see if her daughter wanted to do it and Chloe said no. She wanted to keep some normalcy.

When the auditions did happen; Abby wasn’t expecting these new crop of dance mothers to bring the same amount of back chat of the ones she gets back home. She ended up having to cave to a couple of mothers that refused to shut up. There was one little girl who was about Mackenzie’s age. Abby felt she didn’t need another 11 year old and the girl’s mother basically shouted at Abby to get her to change her mind. And surprisingly it worked.

So much so that another mother tried the same routine. By this stage even Holly was getting worried. She thought it was all too Jerry Springer and that Abby should grab control of the situation. Eventually Abby did. After taking a couple of girls back.

Abby was probably grateful she got to put the auditions on the back-burner because of the competition. The Dance team is returning to the stage after earning the highest scores of the day last week. There can’t be any mistakes. Mackenzie was given a lip-sync and seeing as she was up first most of the pressure was on her. She was able to pull out a crowd pleaser this time. Abby was seen enthusiastically clapping at the end of her performance but she didn’t do the same for the trio.

Instead the first thing to come to Abby’s mind after the trio’s debut was that her team members were all easily replaceable.

Backstage was incredible tense. Everyone was worried about the group routine. Whether the judges will like it and if their daughters will be able to carry off such a large thing as civil rights off. But the girls went on that stage and rocked it. They received a standing ovation from the whole auditorium.

Holly was truly proud of both her daughter and the dance. When they won she was glad that her daughter was able to carry the team to victory. This could mean Nia won’t get replaced. Unlike say Mackenzie who only won second place in her division. It’s really hard for Mackenzie to not grasp the same potential as her older sister and it most likely hurts when Abby unfairly compares them at the end of the day.

Maddie and the trio won first place at the competitions. But in truth everyone knows that Maddie is literally is the only one safe from getting replaced.