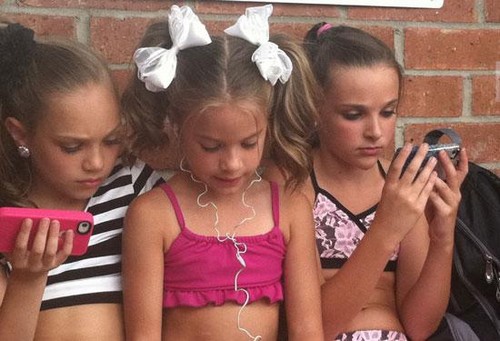 Tonight on lifetime DANCE MOMS continues with a new episode called, “Chloe vs. Kendall: Round 2.”  On tonight’s show every team member feels the pressure to prove to Abby that they belong at the Abby Lee Dance Company.  Did you watch last week’s third episode?  If you want to get caught up you can read our full and detailed recap, right here.

On last week’s episode everyone was on edge when Abby announced she’ll be holding her first national open audition in Orlando. Meanwhile the fallout over Chloe and Kendall’s solos from the last competition continued as Jill accuses Christi of lying to help Chloe win. Brooke, Paige and Chloe were given a tricky trio to challenge Brooke’s pop star credentials, pressuring her to dance and sing.

On tonight’s show Cathy’s back and ready to beat Abby with a new team of boys. Abby is nervous and pushes her team, especially Chloe and Kendall, who are dancing solos head-to-head for the second time this season. With another round of open call auditions looming, every team member feels the pressure to prove to Abby that they belong at the Abby Lee Dance Company.

Tonight’s episode is going to be another drama packed one, which you won’t want to miss. So be sure to tune in for our live coverage of Lifetime’s Dance Mom’s Season 4 Episode 4 – tonight at 9PM EST! While you wait for our recap, hit the comments and let us know how excited you are about the new season  of Dance Moms tonight.

Abby is angry and Peyton is bearing the brunt of it. She was literally the bottom of the bottom tier. Abby has heard from the other girls that Peyton was playing around backstage and that’s how she hurt herself. Well, Peyton’s mother doesn’t like those accusations. She swears the other girls are making up lies about her daughter and demands Abby treat her child fairly. When Abby doesn’t then Leslie tells Abby why don’t she just kick them out. Whether she was expecting or not that is exactly what Abby ended up doing.

She doesn’t have time for anyone’s theatrics and if Leslie had stayed she would have seen that for herself when the rest of the bottom tier got called out. They were Kendall, Mia, and Brooke. Kendall was late to the competition. Sadly for Mia; she blended in without ever standing out. While Brooke forgot thee choreography. Abby is starting to feel like maybe Brooke doesn’t even want to dance anymore after she made a beginner’s mistake.

The second tier was Chloe, Paige, and Mackenzie. Chloe was called out for arranging things at the competition. When Chloe and Kendall were going against each other in the last competition, Chloe was supposed to have gone first. But she went backstage and talked them into letting her go last. That allowed her to see where Kendall made her mistakes and learn from them. For that maneuver she earned second tier. Paige on the other hand made too many funny faces. As for Mackenzie, she was second only to her sister who yet again made first tier.

This week Abby needs more from them. She’s going to push them to their best because he has to. They’re facing Candy Apples this week and Cathy has acquired a whole new team. She’s going back to using mostly boys in her routines and she managed to get brother and sister duos who’ve already won recognition from their YouTube videos. She originally wanted to keep her new set-up a surprise in order to trip up Abby during the competition, but her dance group have been tweeting and posting on instagram. It made her lose the shock value so she implemented a new rule. No social media during the practice.

Abby is setting Chloe and Kendall against each other again. This obviously has their mother on edge. They both made a big deal out of being on the equal footing until Kendall’s mother started to keep count.  She counted had much extra help Chloe was getting. First Chloe’s routine was simpler than Kendall’s, then Chloe got try on her costume earlier, and finally Christi got to capture Chloe’s practicing with Abby’s critiques on video. All these things she’s been able to keep track of but she never saw Kendall’s breakdown coming.

Kendall had an anxiety attack backstage. Luckily, Abby doesn’t know about it yet and she probably won’t unless Kendall meant what she said to her mother. Jill had gone backstage to cheer her daughter up when Kendall told her that she wants to quit.

It’s the day of the competition and everyone has made it on time and ready to dance. Even Kendall! The only time anyone got into sour mood was when they had to deal with Cathy and her nasty comments. Cathy also took that same behavior with her out into the audience. All throughout Kendall’s performance she was making snide comments. Jill restrained herself till her daughter was finished, but she really wanted to tear into Cathy afterwards.

Cathy’s dance team did do a spectacular performance. The new girl she got definitely has star power and was able to show that onstage. So that does make the other teams naturally think about their own group. Abby is scared even though she’ll never admit it. Right before her girls had to go onstage for their group routine; she told them that their best sometimes isn’t enough anymore. That was the extent of her pep talk towards the group. For Maddie though she gave more. She told Maddie that she needed her to carry the team just for a little bit longer. Just until she gets a new team.

The dance the group did was beautiful. If they hadn’t had gone against Candy’s boys team then Abby wouldn’t even doubt their win. It all depends on the judges.

In solos, Kendall won second meanwhile Chloe won first. Hopefully, that will end the competition between Chloe and Kendall. As for the group routines – Cathy’s team came in second. They left the moment they heard about that. They knew there was only one other team that could have beaten them and they were right. Abby Lee’s Dance Company did win.

Not that it’ll mean much to Abby. She’s still holding auditions next week!