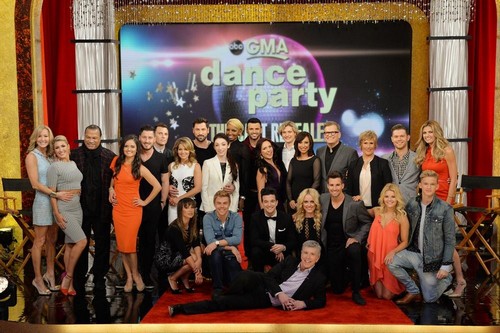 The 2014 cast for Season 18 of Dancing With the Stars was fully revealed this morning, the lineup included some expected faces and then some surprising ones. Noticeably absent is Bruce Jenner, but I’m guessing the network didn’t manage to finagle him into the show. Regardless, they have quite a diverse lineup this year, and some of the contestants are actually pretty big stars.

Sean Avery will be partnered with Karina Smirnoff, and with his pro hockey background, he’s bound to get far in the show. His twelve year hockey career was littered with various successes, and he’s known for being one of the funnier pro hockey players around. He’s also worked as a model [look at the guy!] and interned under Anna Wintour at Vogue, which means he’s prepared for some tough criticism.

Candace Cameron Burke is obviously known best as DJ Tanner on the hit sitcom ‘Full House‘, but she’s also starred in her share of commercials and TV movies, as well as ABC’s popular show ‘Make It Or Break It‘. She’s happily married to her NHL husband Val Bure, and will be partnered with Mark Ballas on the show.

Drew Carey is most famous for his comedy ‘The Drew Carey Show’ plus his sketch show ‘Whose Line Is It Anyway?‘. He also succeeded Bob Barker as the host of the Price Is Right in 2007, and he co-starred on the series ‘The Good Life‘. He will be partnered with Cheryl Burke.

Meryl Davis and her partner, Charlie White, are reportedly ‘the longest-running ice dancing partnership in the history of United States figure skating.’ They are both 2014 Olympic gold medalists, and they are also six-time US Champions. While she’s currently a student at the University of Michigan, she’s clearly got the skills to win this show, especially when her partner is Maksim Chmerkovskiy.

Who doesn’t know NeNe Leakes?  The controversial reality star is a fan favorite on Real Housewives of Atlanta, and she also has a starring role on NBC’s The New Normal. She currently lives in Atlanta and when she’s not wreaking havoc on the Real Housewives set, she’s busy filming for her other shows. NeNe will be partnered with Tony Dovolani.

James Maslow is best known for being a part of Big Time Rush, which has sold out numerous shows around the world and also kickstarted a hit television show. He completed the fourth season of the show last year, and he’s also guest starred in various other Nickelodeon shows. He will be partnered with Peta Murgatroyd.

Diana Nyad created history last year when she became the first person to swim from Cuba to Florida. The then 35-year-old had an audience of almost 25 million people, who were all watching and rooting for her. She is currently working on her memoir, and she’s also a famous public speaker. She will be partnered with Henry Byalikov.

Amy Purdy lost her legs at 19 due to Meningitis, but that didn’t stop her from leading an extraordinary life. She is currently training for the 2014 Paralympic Games in Sochi, and she’s also starred in a Madonna music video, played a lead role in an independent film, and had several modeling jobs. She was also named one of the top 15 marketing para-athletes by the Olympic committee, which is probably why DWTS wanted her. She will be partnered with Derek Hough.

Cody Simpson is a 17-year-old pop star with a massive fan base, especially among teenage girls. With the show looking to target younger audiences, Cody will definitely help them achieve that goal. He was most recently touring on Justin Bieber‘s Believe tour, and he’s also set to release his first book with Harper Collins. He’ll be partnered with Witney Carson.

As we mentioned earlier, Charlie White is one-half of the longest running ice dancing partnership in US ice skating history, with the other half being contestant Meryl Davis. It’ll be interesting to see how competitive the Olympic athletes are with each other, considering their long list of achievements, including 2014 Sochi Gold Medals, Grand Prix final champions, and World Champions. Charlie will be partnered with Sharna Burgess.

Who doesn’t know Billy Dee Williams? Although his recent career has Billy guest starring in television shows and making a brief appearance in The Lego Movie, he’s probably best known for starring across Diana Ross in ‘Lady Sings in the Blues’ and Lando Calrissian in the Star Wars movies. It’s not confirmed whether he’ll reprise his Star Wars role in the upcoming films, but one thing’s for sure: he’s a very, very popular figure among older DWTS viewers. Billy Dee will be partnered with Emma Slater.