Dancing With The Stars Season 19: Janel Parrish And Val Chmerkovskiy Hooking Up – Or Just Pretending They’re Dating To Get More DWTS Votes? 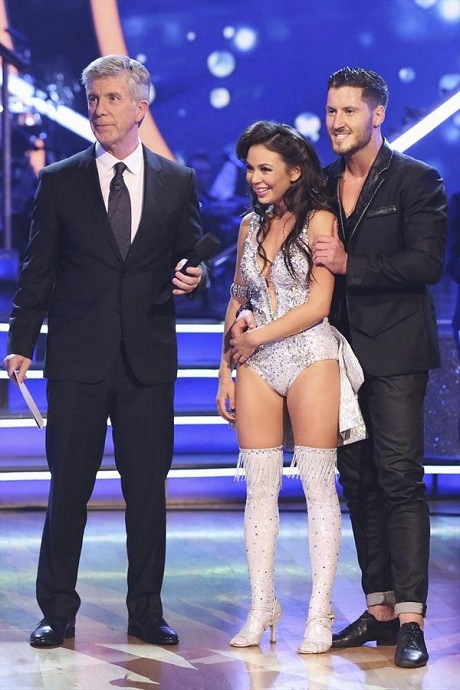 Season 19 of ABC’s Dancing With the Stars kicked off just a few weeks ago, and one of the celebrity dancing couples generating a lot of buzz since the season premiere is Pretty Little Liars’s Janel Parrish and Val Chmerkovskiy. Rumors are already hitting the internet revealing that Janel and Val have been engaging in some serious PDA while training for DWTS, and according to several websites, there is a good chance that Janel and Val are more than just friends. And Janel has been pumping social media with pictures of her and Val working on their routines, and has a legion of devoted fans voting for #TeamJanelskiy.

According to DWTS spoilers in the October 6th edition of OK! Magazine, Janel and Val’s “relationship” is really nothing more than a façade and a publicity stunt, and the couple is intentionally trying to make it look like they are hooking up to improve their chances of winning. The magazine goes on to say, “The chemistry between Janel Parrish, 25 of Pretty Little Liars and partner Val Chmerkovskiy, 28 has the rumor mill rumbling – but a source says they’re just playing up the storyline to garner more votes.”

So, if you’ve been waiting for Janel and Val to Cha-Cha off in to the sunset together and live happily ever after, it doesn’t look like that will be happening anytime soon. Sorry, Team Janelskiy! But, even though we feel a little bitter about Janel and Val’s faux-mance, we can’t deny that the DWTS couple is dancing phenomenally this season.

They aren’t the first couple on DWTS to generate buzz by flirting with each other while the cameras are running and posting pictures of themselves on social media, and they surely won’t be the last. Do you think that the rumors are true and Janel and Val are hooking up backstage? Or are they just in a heavy flirt-mance to drum up some votes? Let us know what you think in the comments below!