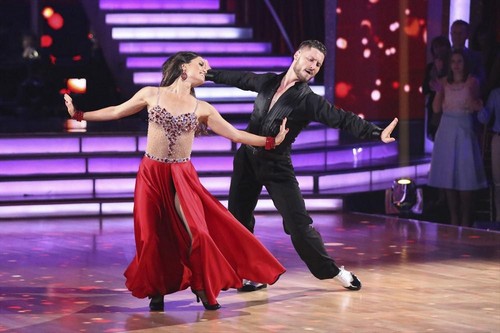 Wonder Years actress and author Danica McKellar danced a Samba dance, on tonight’s season 18 episode 2 of Dancing with the Stars. The show kicks off with a show-stopping opening number choreographed by Mandy Moore featuring the entire cast followed by an announcement that is not to be missed!   We posted a nifty bio of Danica so you can get more familiar with her. If you missed tonight’s show you can read a full and detailed recap, right here.

On last episode Danica performed a Foxtrot and Carrie-Ann loved it saying,  “You are so adorable.  Your enthusiasm for the dance is so cute.  You and Val have so much energy.  Your energy is way up here sometimes a little too expressive with the mouth.”

Danica McKellar and professional dancer Valentin Chmerkovskiy: dancing a Samba.  Danica has been getting ready for his dance tonight.  She tweeted, “Thank you to everyone who watched and voted for me & @iamvalc tonight on #DWTS! Ready for sleep and to learn a whole new dance tmrw – Samba!”

JUDGES COMMENTS: Bruno: “Danica you are like a gorgeous jangle, beautiful to look at, but not yet tame.  There are sometimes on the transitions you throw it away.  There little details but when you get it right you are going to be a scorcher.”  Carrie Ann: “I think you were so sexy.  I thought that first combo you were flawless.  Bruno is right.  The movement was fantastic but you do get lost a bit.”  Len: “You have to straighten your legs a bit but I tell you what, you keep doing what you’re doing. “