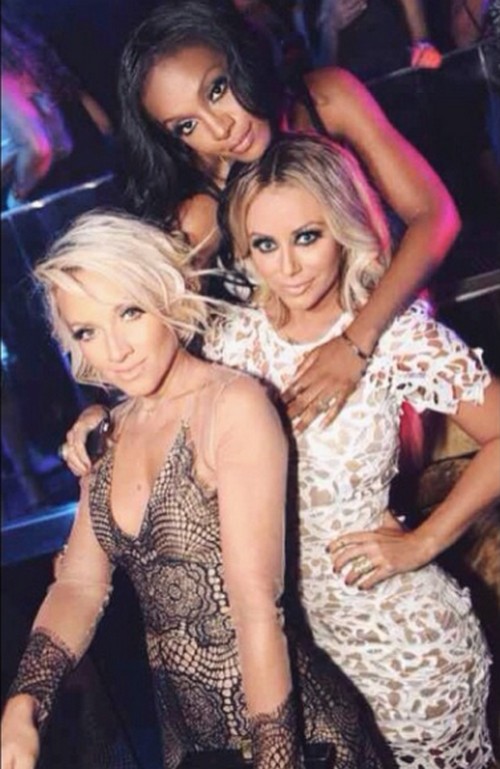 Danity Kane fans are grieving big time today after the band finally issued a statement confirming that they have split up. The ladies – Aubrey O’Day, Shannon Bex, Aundrea Fimbres, Dawn Richard and D. Woods first teamed up about 9 years ago during Diddy’s Making The Band show on MTV. A whole generation of MTV’s viewers were raised on DK and continued following the ladies as they embarked on solo careers beginning in 2009.

A little over a year ago it was confirmed that a DK reunion was in the works and that everyone would be returning with the exception of D. Woods. Of course drama surrounded her absence but the remaining members started playing random shows late last year to gauge how audiences would react. They realized pretty quickly that the diehard DK fan base was alive and well, so a month-long tour was booked this past spring and plans for a new album were under way.

Aundrea left the band last spring after performing some of the groups old songs while touring the states. She claimed to be ready to start a new chapter in her life and was getting married. Drea also looked pretty pregnant onstage when they strapped her into that corset. And then there were three, Aubrey, Shannon and Day- otherwise dubbed DK3. The ladies tried to battle through all of the changes that this reunion brought and they released a new track called Lemonade back in May, which has spent quality time at the top of the iTunes charts.

The ladies wrapped up their tour and made it clear that they were busy finishing up their third album from social media postings. Then this past Monday happened- during a meeting in the studio as Aubrey had her back to Dawn and was speaking with someone else, Dawn allegedly punched Aubrey in the back of the head. It’s an accusation that has been corroborated and police are investigating and determining whether or not charges should be filed.

DK fans have waited all week for something while everyone stayed absolutely quiet until this afternoon when Aubrey and Shannon issued an official joint statement as well as letters to the fans. They both document Dawn’s increasingly hostile behavior, insinuate that it helped to send Drea running and then confirm the worst, that Danity Kane is finished Aubrey says it best when pointing out that a moral and ethical line that could not be ignored was crossed. While it absolutely sucks that they were days away from shooting three videos to support the album I can’t help but be a bit proud of them.

This comeback was about calling the shots (not Diddy) and owning their lives as strong women that are comfortable with who they are and demand respect. In keeping with that, there was no choice but to fold, right? Otherwise their whole supposed platform was BS. Perhaps other supposedly strong women (ahem, Bey) should take a page from this book. Sometimes you have to walk away from the money and a bit of the dream in order to save yourself.

What are your thoughts on DK’s split? Do you think they will get that album out one way or another? Tell us your thoughts in the comments below!