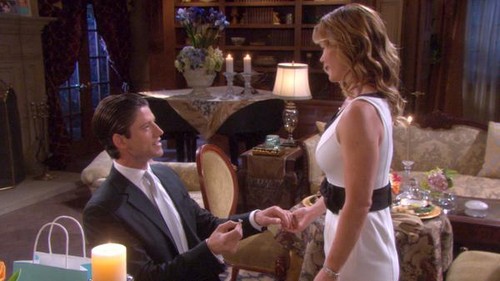 Days of Our Lives spoilers for September 29 – October 3 tease of week of entertainingly vicious cat fights that Days fans won’t want to miss. DOOL spoilers reveal that Jennifer and Eve Donovan’s court case may be done, but their intense rivalry is far from over. When insults start flying between Jenn and Eve, Eve makes the mistake of bringing up Jenn’s late love, Jack, and all hell breaks loose when Jenn assaults Eve. Meanwhile, across town, there is an age old cat fight brewing when Kristen DiMera comes face-to-face with her old nemesis and doppelganger, Susan Banks.

While Eve is getting her butt kicked by Jennifer, her little sister, Theresa, has some personal problems of her own to handle. According to Days Of Our Lives spoilers, John Black’s health is steadily improving, and Theresa is waiting for the other shoe to drop and certain he is going to send her to prison. During the week of September 29, DOOL fans can expect Theresa to get quite a shock when John Black requests a private meeting with her in his hospital room and drops a huge bomb on her.

DiMera Enterprises is going to hell in a hand basket, and EJ is slowly losing control of his own company. It seems like everyone in Salem wants a piece of his pie, and they will stop at nothing to get it. Days of Our Lives spoilers reveal that Clyde makes his next move in his plot to double-cross EJ; meanwhile, Chad and Kate cook up a plan of their own, and in the middle of all of the scheming, Stefano decides to come home. At this point, it is really anyone’s guess who Chad DiMera is actually working for, but we will surely find out when Stefano arrives.

So, Days fans, are you ready for Round #2 of Eve versus Jennifer — are you Team Eve or Team Jenn? And what about Theresa and John’s secret meeting? Do you think he remembers that she hit him over the head? When all the smoke clears, who do you think will take down EJ and gain control of DiMera Enterprises? Let us know what you think in the comments below and don’t forget to check CDL tomorrow for more DOOL spoilers.