Days Of Our Lives Spoilers: Dr. Marlena Evans Ping-Ponging Between John and Roman – Will She Finally Choose? 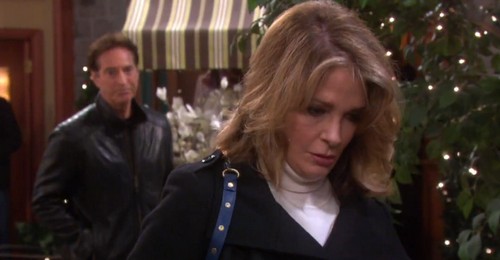 You guys realize that Dr. Marlena Evans has been bouncing from Roman to John and back again for over 20 years now right? For those not in the know, I’m talking about one of the longest running triangles on Days Of Our Lives and TV in general. Marlena was married to Roman, then she thought John was actually Roman back from the dead and so on. Here we are two years later and Marlena isn’t married to either man but she is still usually avoiding one while leaning on the other for support.

This time around John has breezed back into town with the hopes of saving his son Brady from himself. Brady’s life is a mess and he has reverted back to his self-destructive ways. John is hoping that he can pop up out of the blue and shock his son to his senses before he does permanent damage. Although, even if Brady managed to kill himself he would probably still pop up in Salem as a ghost a’ la Izzy B, his late mother.

Anyway, John runs the situation and his concern for Brady by Melena who totally understands why his son is a train wreck. It’s an effect that John had on her as well. He realizes pretty fast that she’s not going to be of much help and leaves her alone. Of course being alone to stare into space for 30 seconds means that Marlena needs a crutch and his name is Roman. They may be divorced but there is still some trust there and she believes that she can lean on him at times like this.

Are you a fan of the whole Marlena/John/Roman saga after all of these years or do you wish that Days would back burner it for good? Tell us your thoughts in the comments below!