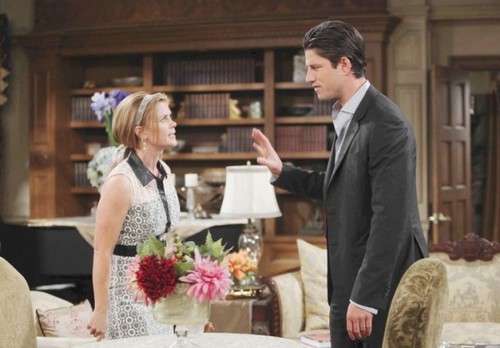 Days of Our Lives spoilers reveal that Will’s article exposing Sami, EJ, Abigail, and Kate’s cheating, lies, and schemes will go public on Wednesday August 20. We know from DOOL spoilers that everyone’s in Salem learns from the article that Abigail slept with Sami Brady’s fiancé, and they had a scandalous affair. Abigail basically has to walk around Salem with a Scarlet “A” on her chest, and she is publically shamed. The part that doesn’t really make sense is Will wrote the article because he was upset with his mom for what she was doing to his cousin Abigail, so why would he then turn around and publically paint her as a scandalous home-wrecker?

According to Days of Our Lives spoilers in the August 25th edition of Soap Opera Digest, Will didn’t write anything about Abigail in his article, someone tampered with it before it went public. And that someone, as we learned Friday, August 15, was the editor after her meeting with Sami. Regarding the upcoming DOOL twist, Guy Wilson told Soap Opera Digest, “Someone went behind his back and inserted Abigail’s name in to the article. Will was trying to protect Abigail, and the exact opposite happened. Will has to work really hard to make it clear he had nothing to do with Abigail being part of the story. He is crushed because it blows apart his and Abigail’s relationship.”

Days of Our Lives spoilers reveal that before the article goes public, Sami tries to pay the magazine not to publish it. They refused to accept her payoff, but it doesn’t take a genius to put two and two together and realize that Sami was the one who provided the info that added Abigail’s name to Will’s article. We will have to wait and see exactly how the editor learns that Abigail was the cheater and how her name winds up in the article but regardless of how she did it, Sami Brady has struck again!

What do you think about Sami effecting the change in Will’s article? Did he have it coming since he went behind his mother’s back and wrote the article to begin with? Have you had enough of Sami Brady’s never-ending scheming and avenging? Let us know what you think in the comments below and don’t forget to check CDL for all of your Days of Our Lives spoilers.