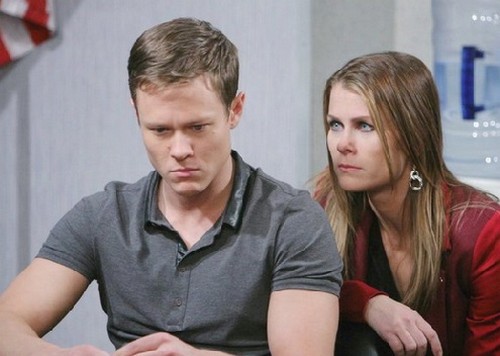 Days of Our Lives spoilers tease some major excitement coming up during the week of August 11-15. Sami Brady has been wreaking havoc in Salem over the course of the last few weeks, but according to DOOL spoilers, her own son Will is about to turn the tables on her. When Sami learns that Will wrote an article about her, she is excited and proud. But, once she gets her hands on the article and reads it, all hell breaks loose.

According to Days of Our Lives spoilers, in Will’s story he exposed her fraud of a marriage, everything she did to Abigail, and the fact that Sami and Kate basically stole DiMera Enterprises from EJ and Stefano. Not only is Sami hurt that her own son betrayed her like that, she now has to deal with the repercussions of everyone in Salem knowing what she has been up to the last few weeks.

DOOL spoilers for the week of August 11th also tease that Sami begins wavering, and contemplates taking EJ back. She doesn’t want to be weak and forgive him, so she opts to go to the police station and get a restraining order against him. If he isn’t allowed to talk to her, then there is no way that he can convince her to take him back.

During the week of August 11th-15th DOOL fans can also expect Kristen DiMera to finally return to Salem. Since Eileen Davidson brought back the role of Kristen, she has spent the past two week playing cat and mouse with Daniel in St. Louis. But Days of Our Lives spoilers tease that Daniel and Kristen will finally make their way back home, and no one is exactly pleased by the homecoming.

So Days fans, are you Team Will or Team Sami? Do you think that Sami deserves everything Will wrote about her, or did he cross a line seeing as how she is his mother? What kind of repercussions could Will’s story going public have on Sami, could she be in some sort of legal hot water? Let us know what you think in the comments below and don’t forget to check CDL tomorrow for more Days of Our Lives spoilers.