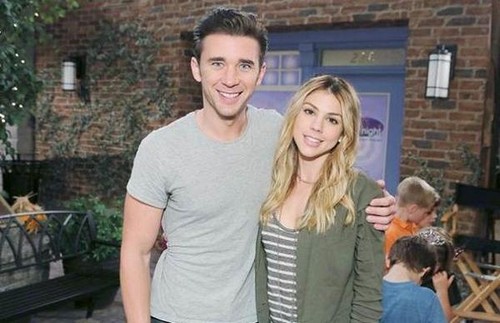 Days of Our Lives weekly spoilers tease some exciting drama going down in Salem during the week of December 8-12, and rumor has it DOOL fans will not want to miss an episode of the NBC soap. The Days of Our Lives newbies continue to spice up the soap, and DOOL spoilers tease that fans are in for a hot and steamy love scene this week. Here’s what Days fans can expect to see during the week of December 8.

Monday December 8: According to Days of Our Lives spoilers for Monday’s episode, the newest edition to the DOOL cast, Serena Mason, pays her ex-boyfriend a visit. Apparently Serena and Eric had a hot fling many years ago and Eric is shocked when the reporter waltzes arrives to catch up with him. We’re no rocket scientists – but it’s safe to assume Serena’s arrival is not going to go over well with Nicole.

Tuesday December 9: Days of Our Lives spoilers for December 9th reveal that Theresa Donovan learns something alarming about her new friend. DOOL rumors tease that Theresa is the first Salem resident to put two and two together and realize that Paul Norita may be a major flirt – but the Days’ women just aren’t his cup of tea.

Wednesday December 10: Wednesday’s episode of Days of Our Lives will feature a major confrontation between Rafe and Clyde. Despite the fact that Jordan is cozying up to Chad DiMera, Rafe still feels the need to defend her and he pays Clyde a visit to discuss his business in Salem and harassing his step-daughter.

Thursday December 11: According to Days spoilers, while Rafe is busy defending Jordan’s honor – she’ll be taking her relationship with Chad DiMera to the next level. DOOL fans will not want to miss Thursday’s episode of the NBC soap, because Jordan and Chad hook up and make love for the first time!

Friday December 12: Days of Our Lives spoilers for the December 12 episode reveal that Clyde continues scheming and infiltrating Ben’s life, and he decides to bond with Abigail and offers to lend her a hand with a problem she has. Meanwhile, JJ heads to therapy to work out his many issues – and has a major breakthrough.

So Days fans, what do you think of Serena Mason? How is Nicole going to handle the news that Eric is cozying up to an old lover of his? What secret does Theresa uncover this week? Do you like Chad DiMera and Jordan together? Let us know what you think in the comments below and don’t forget to check CDL tomorrow for more Days of Our Lives spoilers and news.