Days Of Our Lives Spoilers: Can Theresa Save Jennifer From Liam and His Evil Motives? 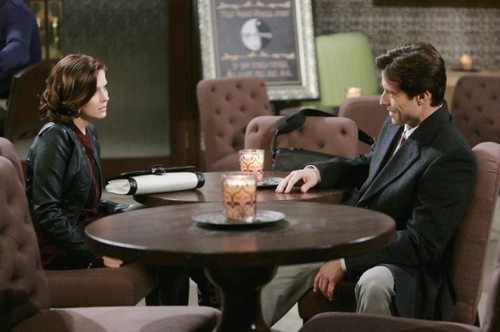 When Theresa Donovan arrived in Salem it became clear very quickly that she would become the reigning Days Of our Lives “Bad Girl.” Considering Theresa’s rebellious nature and how she feels about Jennifer, it didn’t come as much of a shock when Liam enlisted her to help him take down Jennifer and Daniel. Theresa and Jennifer butted heads working together, and Theresa made it her personal mission to make Jennifer’s life a living hell. She even attempted to steal Daniel from Jennifer just to spite her, and when Daniel turned down Theresa it only fueled her hate for Jennifer. How far will Theresa allow Liam to really go with his scheme though?

Theresa may be a “Bad Girl,” but apparently even she has some morals. This week on Days of Our Lives Theresa will begin to realize how unhinged Liam really is. Last week when Liam stole Jennifer’s underwear and laid in his bed sniffing them while fantasizing about Daniel dying, DOOL fans realized we were dealing with a legitimate psychopath. Obviously Theresa is unaware of Liam’s lingerie fetish, but she isn’t completely clueless and is starting to pick up on how dangerous Liam could potentially be.

Mark Collier, the actor that plays Liam is coming off as a legitimate psychopath, he is almost too good at it. As Liam’s character unravels and shows his true colors on DOOL, it is becoming clear that Liam has some serious hate and resentment for Jennifer, which is a bit mysterious. Jennifer briefly dated Liam when she was split up from Daniel and the couple shared one kiss, after just a few short weeks Jennifer and Daniel reconciled and Jennifer and Liam’s relationship ended before it ever really started.

Since Liam arrived in Salem, there hasn’t been much backstory on his character that would explain why he is so passionate about his hatred for Jennifer, except that he has an ex-wife whom he also hates. Liam and Jennifer were never in an official relationship though, his obsession with her is completely unexpected, which begs the question, has Jennifer crossed paths with Liam before in the past? The fact that he become so obsessed and passionate over a woman he barely dated seems a little off base. Jennifer’s character has been on DOOL for years and she has left Salem on multiple adventures, perhaps she wronged Liam somehow years ago and he came to Salem to seek revenge?

In a recent interview with Soap Opera Digest, Jen Lilley, the actress that pays the part of Theresa Donovan dished on the upcoming drama between Theresa, Liam, Jennifer, and Daniel. According to Lilley, Theresa will begin to realize how “dark” Liam’s intentions are towards Jennifer and Daniel, and she will even go as far as to try to warn Daniel about Liam. Unfortunately Daniel doesn’t take Theresa seriously because the Theresa he knows would never be concerned for Jennifer.

Do you think Theresa Donovan will end up redeeming herself and surprising Salem and actually saving Jennifer from Liam? Or, will she live up to her “Bad Girl” reputation and step aside and allow Liam to hurt and possibly murder Jennifer and Daniel? This would be the perfect opportunity for the DOOL writers to show a softer and more likable side to Theresa. For once she could actually be a hero, instead of a villain.

So, DOOL fans, do you think it is possible that Liam’s obsession with Jennifer is much more than an over the top crush, and he may be somehow linked to her past? We need to understand if there is a deep dark secret or two lurking there – somewhere…. Share your thoughts and theories in the comment section below.