Days of Our Lives Spoilers: Brady Facing Theresa and Kristen War Over Dating Him – Does He Want Either? 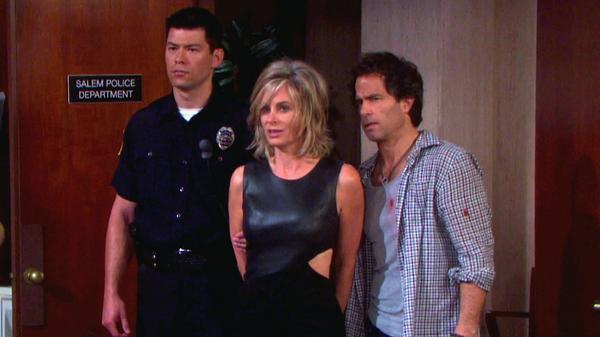 When Days of Our Lives spoilers revealed that Eileen Davidson was returning to Salem as Kristen DiMera, we all knew it was only a matter of time before she tried to sink her teeth back into Brady Black. However, there is a slight roadblock between Brady and Kristen (aside from the obvious – Brady wants nothing to do with her), his wife Theresa Donovan. DOOL spoilers tease that soon Kristen DiMera and Theresa Donovan will finally face off, and a vicious cat fight ensues over Brady Black.

According to Days of Our Lives spoilers in the September 8th edition of CBS Soaps in Depth, Kristen DiMera is apparently a free woman and roaming the streets of Salem wreaking havoc. The magazine teases, “Kristen and Theresa square off over Brady, and things could get ugly! Ironically, the man in the middle of this tug-of-war might just want to cut the rope; after all he claims to not want to be involved with either of them! But will either lady just simply let Brady walk away?”

Considering Kristen’s track record, she could probably eat Theresa Donovan alive. But, Theresa actually attacked Brady’s father John Black and put him in a coma because he was standing between her and Brady, so we probably shouldn’t count her out of the race just yet. What do you think Days fans? When Kristen and Theresa go head to head, who do you think will end up on top? Share your theories in the comments below and don’t forget to check CDL tomorrow for more Days of Our Lives spoilers.