Days Of Our Lives Spoilers: John Wakes Out of Coma – Will Police Learn Theresa Is Guilty and Clear Brady? 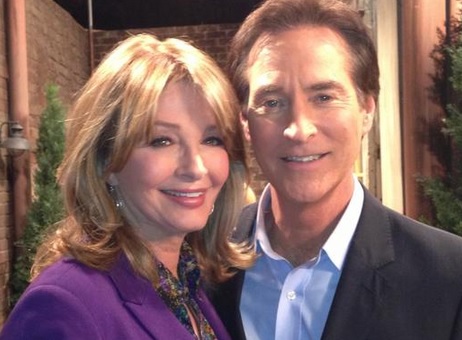 Days of Our Lives spoilers have teased for weeks now that John Black’s health was getting worse and worse. When John threatened to expose Theresa and Brady’s sham of a wedding, Theresa hit him over the head with a fire poker and he wound up in a coma. Since Brady was passed out drunk, when the cops arrived Theresa lied and said that Brady is the one who put his father in the coma and it was self-defense. Since John was in a coma, and Brady didn’t remember anything, Theresa seems to have pulled off her crime scot-free.

Dr. Daniel Jonas told Marlena and Brady that the odds of John waking up were slim to none. However, on the Monday August 11th episode of Days of Our Lives, it looked like John might actually be waking up sooner than anyone expected. Marlena is determined to save John, so she decided to spray his hospital room with perfume in hopes of bringing him back from his coma. After a few moments, Marlena gave up and left the room. However, according to Days of Our Lives spoilers after Marlena left John showed signs of life and his eyes fluttered and tears ran down his cheek.

The only reason Theresa has gotten away with attacking John with the fire poker was because he wasn’t awake to tell the truth. If John wakes up, he could put Theresa in prison for a long time. Then again, he was hit in the head hard enough to put him in a coma, so there is a chance that he won’t remember who hit him.

What do you think Days fans? Is John Black about to wake up from his coma? If he does wake up will he tell the police that Theresa is the one that attacked him, and clear Brady’s name? Let us know what you think in the comments below and don’t forget to check CDL tomorrow for more Days of Our Lives spoilers.