Days Of Our Lives Spoilers July 7-11: Sami Admits She Knows EJ Cheated With Abigail – Brady and Theresa Off To Vegas To Get Married? 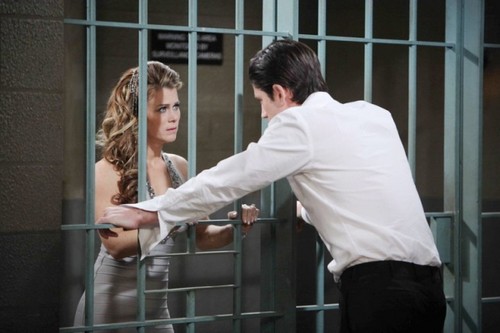 The drama on NBC’s Days of Our Lives never seems to take a break, and according to DOOL spoilers the week of July 7-11 will be no exception. Recently it was revealed that Sami Brady is no fool, and is well aware of her new hubby EJ’s infidelities, and marrying him was all a part of her elaborate revenge scheme (which we still aren’t entirely sure what entails). According to Days of Our Lives spoilers for the week of July 7th, Sami pays EJ a visit at his prison cell and finally clues him in on her scheme and reveals that she knows all about his affair. EJ is not a happy prisoner when he realizes he has been caught, and played by Sami.

Days of Our Lives spoilers for the week of July 7th also tease an impromptu trip to Las Vegas for Theresa and Brady. After Brady has another blowout with his father John over his drug addictions and relationship with Theresa, he decides to take his troublesome girlfriend to Las Vegas, the city of sin. Considering Brady will most likely be drunk and high, and eager to defy his father, there is a good chance the Salem rebels might stop by a Vegas chapel for a shotgun wedding.

Back in Salem, Clyde will be creeping around town and spying on Jordan and Ben, unbeknownst to them. Kate just couldn’t help herself and had to meddle in Rafe’s girlfriend’s past, and now there is a potentially dangerous man in town and it is all her fault. DOOL spoilers teased months ago that a dangerous man from Jordan’s past would show up in Salem, so it’s safe to assume Clyde is the person that Jordan and Ben are running from. When it is revealed that Kate tracked down Clyde and told him where his children were hiding, she is going to have some serious explaining to do.

Days of Our Lives spoilers also tease that Eve will find a new doctor so that she is no longer Daniel’s patient and pressure him to go out with her, and Hope and Aiden will grow closer at the Salem Gala. So DOOL fans, are you excited to finally see Sami curse EJ out for cheating on her with Abigail? Do you have any theories as to what her revenge plan might be leading up to? And, what about Brady and Theresa, do you think they will get married in Las Vegas? Share your thoughts and theories in the comment section below and don’t forget to check CDL for all of your Days of Our Lives spoilers.