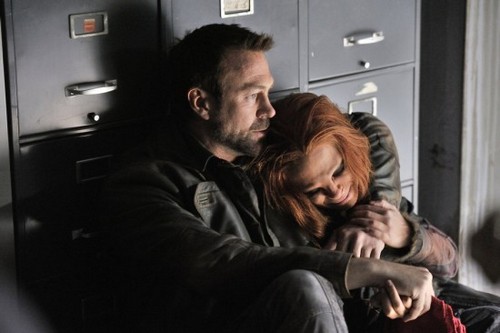 Syfy’s series Defiance continues with a new episode tonight called, “If You Could See Her Through My Eyes.” On tonight’s episode, Datak turns to an unlikely ally for help after he’s framed for a bizarre murder; and a mysterious stranger leads Irisa to discover more about her destiny.

For those of you unfamiliar with the show, the show takes place in the future on a radically transformed Earth containing new species, some having arrived from space, many others the result of contamination by terraforming technology which has transformed native flora and fauna in unforeseen ways.

On last week’s episode an Arkfall crash salvage mission led by Nolan lead to danger in the form of an alien race he had never encountered before; at the same time, Stahma made a shocking power play after she was admonished by church elders for her growing sense of female empowerment; and Irisa began confessing her deep, dark secrets to Tommy. Did you watch the last episode? If you missed it we have a full and detailed recap, right here for you.

On tonight’s episode Datak is framed for murder and turns to an unlikely ally; Irisa discovers more about her destiny.

Defiance airs at 8 PM on SYFY and we will be live blogging it with all the up-to-the-minute details. So make sure to come back to this spot and spend the evening with us! Make sure to refresh often to get the most current details and updates! In the meantime, enjoy a sneak peek of tonight’s episode below.

The handmaiden, Jalina, was found dead on Datak Tarr’s doorstep and before witnesses could be brought against him – he quickly moved the body inside. Jalina was a sworn servant since she was a child and in his own way Datak cared for her but he doesn’t want to go to jail over her. So Yewll gave him a few options. He could either dump Jalina’s body or risk telling people why his former handmaiden was closer to his place than she was to the family home!

Stahma for one wouldn’t like the answer. Unlike Datak, she actually cared about Jalina in a more appropriate sense. Almost like a surrogate daughter which is why she went to Nolan asking him to keep an eye out for her. And poor Nolan got so worried he confronted his own daughter on Jalina’s whereabouts.

Nolan knows that when people disappear its best to go straight to Irisa. He has to constantly be on the lookout in case anyone begins to realize that it’s Irisa that keeps abducting people off the street. But this time it wasn’t her so Nolan was left feeling like a heel for even accusing his daughter in the first place.

However Alak has a valid reason to accuse his own wife of infidelity even though he doesn’t know the full story. Christie has been dressing up as a Castithan and sneaking out to go to parties. And on her last jaunt she ran into Mercado who was doing the same. She smiled, he smiled, and a Castithan courtship gem ended up being gifted. These gems are handcraft and they don’t just get handed out to anyone – it’s strictly for courtship so when a husband sees that someone gave that to his wife – he begins to suspect.

And where Alak’s suspicions fail to draw an alarming picture then he knows he can rely on Deirdre. Deirdre is a troublemaker and she’s focusing all her willpower on breaking Alak and Christie up. So she told him where he could find his wife at night.

He showed up at the party and found his wife grinding up on what he called a costume transvestite (Mercado). Naturally, he was furious and wanted to drag her out of there, but she refused to go saying that she feels strong dressing up like that – like Stahma. As if any man wants to find himself married to a carbon copy of his mother.

While Alak was busy watching his marriage fall apart, his parents were oddly working together. Once Datak realized Stahma wasn’t behind Jalina’s death – he recruited her. And so they worked together to find who would dishonor their family this way. Rafe also tagged along. He both wants something from Datak and believes that no young woman should have been targeted like Jalina did. Whoever killed her also took her eyes.

Funnily enough there’s a market for such things. It seems people can’t wait to look like a Voltan and are even willing to buy “contact lenses” just do it.

The demand for those items is so high that someone has taken to kidnapping Voltans off the street in order to take their eyes. Nolan and Irisa found about this whole scheme when they came upon a doctor stealing Rinna’s eyes. Mercifully he only go through taking one of them instead of both. The doctor managed to escape from the peacekeepers but he couldn’t outrun Datak and Rafe. Those two had anger on their side.

Datak had promised his wife that he wouldn’t kill the doctor though he still had some leeway to maim the guy and that’s what he did. He took the doctor’s eyes out as payment for what he did to Jalina.

Rinna is going to be ok. She has eyesight in one eye and the right amount of attitude to carry off an eye-patch. But the friend that came to the city with her – was in a little bit of a hurry to leave. Not only was Rinna’s situation scary; he also wanted to escape Irisa.

Irisa has been having dreams about him and it wasn’t until she kissed him that got a clear vision of them together onboard one of the Voltan ships. She wants to know what that means and he on the other hand simply wants to flee the area. So the mystery remains!

The murder of Jalina and the attack on Rinna all came about because some humans couldn’t wait to pretend to be something they weren’t. And in the process they lost on what simply being human would have given them. Christie didn’t want to give up crossplay hence she’s slowly losing her husband to Deirdre.

That was Deirdre’s plan all along!