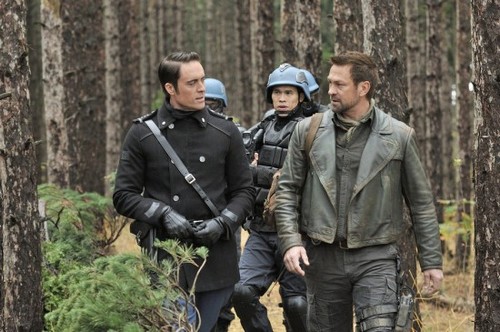 On last week’s episode Nolan was ordered to hunt down and destroyed those responsible for a vicious attack in the badlands on a badly shaken Pottinger and his caravan. Tensions flared when Nolan’s investigation turned up evidence implicating one of Rafe’s miners. Meanwhile, Datak set his vengeful sights on reclaiming control over the family business. Did you watch the last episode? If you missed it we have a full and detailed recap, right here for you.

On tonight’s episode an Arkfall crash salvage mission led by Nolan leads to danger in the form of an alien race he has never encountered before; at the same time, Stahma makes a shocking power play after she’s admonished by church elders for her growing sense of female empowerment; and Irisa begins confessing her deep, dark secrets to Tommy.

Defiance airs at 8 PM on SYFY and we will be live blogging it with all the up-to-the-minute details. So make sure to come back to this spot and spend the evening with us! Make sure to refresh often to get the most current details and updates! In the meantime, enjoy a sneak peek of tonight’s episode below.

Tommy’s new girlfriend has gotten into his head and dating her is not in his best interests. So far he’s failed as Nolan’s second – reporting on Nolan to Mayor Niles Pottinger was a little bit dumb considering Nolan is his direct superior. So when he showed up for an important expedition expecting to bring his girlfriend along (for some fun on the road) – Nolan told him he could return home. He was tired of the other man’s unprofessionalism. However Tommy (dismissed and slightly embarrassed) got too big for his breeches. He quit right on the spot in his best attempt yet at looking tough and his girlfriend then proceeded to fill his head with the possibility of leaving Defiance and start over fresh somewhere else.

And he was prepared to leave until he caught on to what Irisa has been doing. He saw her follow a man behind the buildings and so he pursued her. Then when he saw her doing her mouth trick to her “victim” he threatened to shoot her if she didn’t stop. So she did but she can explain (sort of) what she was doing. Though at first he didn’t want to listen to her excuses nor let down his guard around someone he considered a murder. As far as he’s concerned – she killed a man.

Yet she was a friend and that’s why he didn’t immediately turn her. Tommy simply made a few concessions because of that. He was ready to wait to see if the man she attacked woke up on his own. He wanted to at least see for himself if she was lying about her abilities or if she is capable of bringing people back to laugh.

Nolan left on the trip earlier so Irisa didn’t have to worry about him hearing about her, but it’s not like he had a choice to leave. Pottinger was in need of an Arch Hunter. His only problem was – Nolan was the best around. Pottinger didn’t really care to bring him but it was with Viceroy Berto Mercado’s insistence that he did.

Nolan and Pottinger were supposed to collect some form of clean energy source. Though what they found was a Gulanee transporter.

The Gulanee was in there for so long that they didn’t even know the great human/Votan war was over. They came out of their pods and started killing all the humans they believe stood in their way. In the aftermath, Nolan and Pottinger were the sole humans left standing. Pottinger’s BioMan did his best to save them from the Gulanee and died in the process.

Nolan may not believe but Churchill was very special to Pottinger. He loved him and so it’s going to be hard losing him like that. He barely coped as it was while also dealing with the Gulanee that was still on their trail. So when he got the chance – he avenged his friend and killed the Gulanee.

Remarkably, neither Nolan nor Pottinger returned to Defiance as conquering heroes. Pottinger was actually called a failure by Viceroy. Apparently the viceroy had sent the men in fully aware they were going to be scavenging some dangerously guarded gulanite. And he didn’t care who died as long as he got his hands on the energy source to pass on to E-Rep.

So Pottinger lost 43 men and is at risk of getting fired and Nolan returned to find Tommy hanging around Defiance a little bit longer.

Tommy now believes in Irisa’s capabilities and ended up breaking up with his girlfriend when she found out the real reason he wants to stick around is another woman. Though he hadn’t excepted his recent ex would go looking for comfort in Nolan’s arms. He never thought she would stoop that low.

And what no one would have thought – the viceroy has a weird appreciation of Castithan culture. Although it’s not really safe to be or want to be Castithan. Stahma Tarr is trying to change things for her people. She wants to be liberated from its former customs and in doing so – she killed several people all to get the clergy off of her back for running her husband’s business.