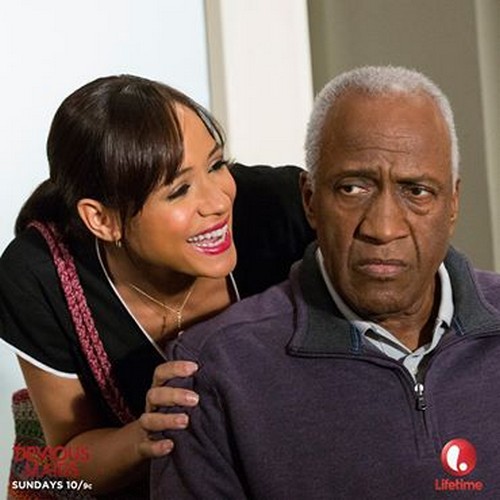 Tonight on Lifetime DEVIOUS MAIDS continues with a new episode called, “Dangerous Liaisons.”  On tonight’s episode Marisol discovers shocking news about her fiancé and Opal; Rosie takes Kenneth to a specialist who offers them newfound hope; Carmen prepares for her performance debut; Genevieve invites Zoila to a luncheon; Valentina struggles to get over Remi; Evelyn finds comfort in someone other than Adrian.

On the last episode Carmen felt threatened by an old flame from Alejandro’s past and went to great lengths to insure that her career wasn’t in jeopardy; Zoila helped Valentina with her job but ignored problems at home; Rosie began a new job with a dysfunctional family; Marisol tried to make peace with Opal; Peri threatened Spence so he would stay in their marriage; Adrian coped with a home invasion but faild to protect Evelyn in a dangerous situation.  Did you watch last week’s episode?  If you missed it, we have a full and detailed recap, right here for you.

On tonight’s episode Marisol discovers some shocking news about her fiancé Nicholas and Opal. Dissatisfied with the doctor that Didi’s provided for Kenneth, Rosie takes Kenneth to a specialist who provides them newfound hope. Carmen prepares for her performance debut in front of industry bigwigs, but when reality hits she struggles to perform. Genevieve tries to show her support by inviting Zoila to a luncheon. Increasingly wary of Adrian’s behavior, Evelyn finds comfort elsewhere. Valentina struggles to get over Remi.

Tonight’s episode is going to be another fun one, which you won’t want to miss. So be sure to tune in for our live coverage of Lifetime’s Devious Maids Season 2 Episode 3 — tonight at 10PM EST! While you wait for our recap, check out the preview below.

Tonight’s episode of Devious Maids kicks off with a Beverly Hills neighborhood watch meeting, headed by Adrian. Obviously Adrian’s neighbors think it is absurd that he wants them to walk the streets, they don’t see why they can’t hire someone to walk the streets for them. They think they should throw a luncheon to combat the neighborhood crime. Evelyn informs Adrian after their guests leave that he is moving to the guest room until his “psychosis has subsided.” After Evelyn heads upstairs Adrian orders their bodyguard to get him his own gun.

Marisol shows the letter she found to Rosie and Zoila. Nick’s Mom wrote the letter telling her daughter to get Opal out of the house ASAP, but his Mom is dead so she can’t ask her what was wrong with Opal.

Ken’s doctor stops by and Rosie thinks he is a fraud. Rosie is sure Ken is making progress and just needs some therapy but the doctor informs her that Ken is showing no change. The Doctor leaves and Rosie tells Ken’s girlfriend she thinks they need a second opinion, his girlfriend informs her she needs to drop it and do her job-which is clean the house.

Odessa catches a young man leaving flowers outside. He says he feels bad about what happened to Alejandro, she reassures him that Alejandro’s killer will be caught and punished.

Marisol sits down with Opal’s son Ethan and looks through an old photo album. She discovers that Dalia was friends with Evelyn.

Genevieve yells at Zoila for vacuuming too loudly, she needs sleep. Zoila confesses that she doesn’t want to go home because her house is empty. Genevieve says Zoila needs to have some fun and invites her to her luncheon tomorrow as a guest.

Valentina video chats with Remi, and tries to tell him about her parents splitting up. Remi tells her he can’t talk. Ethan over hears and says that Remi is insensitive and offers to talk to her about her parents, Valentina doesn’t want his pity.

Evelyn catches Adrian playing with his new gun. She barges in on their bodyguard Tony and flips out on him for buying Adrian a gun.

Carmen and Odessa help Alejandro’s Aunt plan Alejandro’s funeral. When Carmen learns that Beyonce and Kanye are coming to the services, she begins scheming. She proposes to Alejandro’s Aunt that she sing at the funeral, obviously she has ulterior motives.

Genevieve’s guests begin arriving at the luncheon, Zoila isn’t having a good time. Marisol crashes and approaches Evelyn. Evelyn is shocked when she learns that Marisol is now in a relationship with Nick and no longer cleaning houses. Marisol questions Evelyn about Dalia and Opal. Evelyn says that Dalia never talked about Opal, but she did hear rumors after Dalia died that Nick was having an affair with Opal.

Rosie sneaks Kenneth to a different doctor when his girlfriend isn’t home. The doctor confirms her suspicions that Kenneth needs to be in physical therapy so that he can get better. On the way home she drives past Kenneth’s girlfriend Didi, who is making out with Dr. Sanders in the middle of the street. Rosie reveals to Didi when she comes home that Kenneth is going to therapy three times a week, and if Didi doesn’t let him go she will tell his daughter Lucinda about Didi’s affair.

Valentina tries to video call Remi, but a girl named Heather answers. She slams her computer shut and heads downstairs. She finds Adrian standing by the window with his gun. She sits down with him and makes him a cup of tea. Valentina tells Adrian she is worried about him. Adrian begins talking about his and Evelyn’s six year old son who was killed by a hit and run driver. He didn’t protect his son, but he plans to protect Evelyn so he doesn’t lose her too.

The boy that left Alejandro flowers is standing by his house, he receives a phone call from a restricted number. The man on the other end of the line says he needs to get out of there before he gets them all arrested.

Marisol finds Ethan still looking through the photo album. He says his Mom went to the store to get stuff to bake Nick a cake, because he is coming home tomorrow. She begins quizzing Ethan about Opal and he reveals that he has no idea who his Dad was, Opal said it was “better for everyone” if he didn’t know.

Odessa catches Carmen rehearsing a song for Alejandro’s funeral. She informs Carmen that this is a funeral, not an audition, and Alejandro’s love ones deserve to say good-bye to him with dignity. Carmen informs Odessa that Alejandro is dead, and she is not, and she “is going to be a star.”

Valentina asks Ethan to hang out with her this weekend. She says Remi made a new friends, so she thinks it is time for her to make a new friends too.

Meanwhile in the Congo Heather is sitting by Remi’s bed, and he is unconscious and running a fever. She reveals to the doctor that the antibiotics aren’t working.

Tanya stops by and apologizes to Zoila for being so rotten to her at the luncheon. She reveals that Genevieve told her about Pablo dumping her. Zoila is furious and calls Genevieve out for gossiping about her. Genevieve comforts her and tells her she will never leave her like Pablo and Valentina, and she invites Zoila to stay with her for a few days.

Evelyn heads to her bodyguard Tony’s room in the middle of the night and knocks on his door. He doesn’t answer so she walks in and finds him having sex with Tanya. She runs back to her house, but realizes she locked herself out. She breaks the window to unlock the door from the inside and Adrian comes running and shoots his gun at her thinking she is an intruder.

Luckily, Evelyn just has a flesh wound. Tony sends Adrian to get a doctor, and while he is gone Evelyn kisses Tony.

Carmen takes the stage at Alejandro’s funeral but the reality sets in that Alejandro is really gone and she is unable to sing her song and breaks down in tears.

Two girls find the young man that was leaving Alejandro flowers dead on his front yard next to his flowers. He has a note stuck to his chest that says he is sorry and a bottle of pills clutched in his hand.