BY Amanda Austin on June 15, 2014 | Comments: one comment
Related : Uncategorized 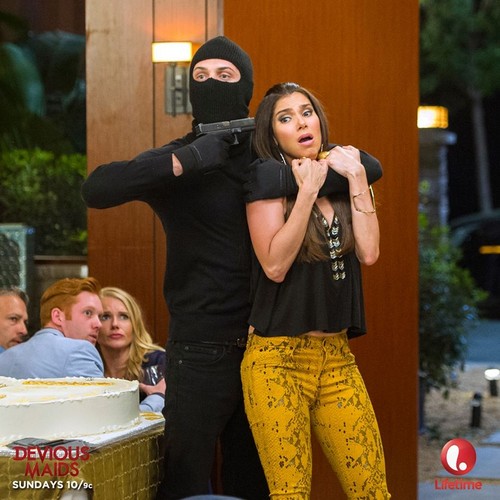 Tonight on Lifetime DEVIOUS MAIDS continues with a new episode called, “The Visit.” On tonight’s episode Reggie moves forward with his plan to tear apart the Miller household; Genevieve’s estranged mother shows up at her door; Marisol deals with a gossipy new hire at the Deering mansion; Ty’s obsession with Carmen takes a violent turn; Adrian begins to suspect that Tony may not be who he claims to be.

On tonight’s episode unbeknownst to Rosie, Reggie moves forward with his plans to tear apart the Miller household. Genevieve is surprised when her estranged mother (June Squibb) shows up at her door thanks to Zoila. Marisol deals with a gossipy new hire at the Deering mansion. Ty’s obsession with Carmen takes a violent turn. Adrian begins to suspect Tony may not be who he claims.

Tonight’s episode is going to be another fun one, which you won’t want to miss. So be sure to tune in for our live coverage of Lifetime’s Devious Maids Season 2 Episode 9 — tonight at 10PM EST!

Tonight’s episode of Devious Maids kicks off with Carmen at a café; she notices Ty hiding behind a menu a few tables over. She approaches him and accuses him of following her. She saw him at the market and the movies. She orders him to stop following her and informs him that she dates men, not confused little boys.

Ty calls a meeting with Ethan and the rest of his friends, after killing Alejandro they don’t want any part of another home invasion. He tells them they have to help him hit one more house and rob his Uncle Spence, and if they don’t he will tell the cops that they robbed the other houses.

Genevieve is on a hunt for a kidney, unfortunately Remi isn’t a match. Remi thinks they should contact their family in Oklahoma; Genevieve doesn’t want anything to do with them and makes him promise not to call them.

Marisol is interviewing in-home nurses for Nick because he is coming home from the hospital soon. She hires a bubbly woman named Molly.

Adrian confronts Evelyn and tells her that he knows she is sleeping with Tony and he wants her to stop seeing him. She reminds him that he screwed the help and now she is. Evelyn tells him they have an open marriage and he can try to seduce Valentina if he wants, but she will probably quit. Adrian informs her Tony has ulterior motives and he probably doesn’t like her.

Rosie is working on Kenneth’s speech therapy with Rich. Dee Dee marches in and wants to know why Rich put his bags in Lucinda’s room. He says he is just staying for a few days because his apartment is being painted, Dee Dee says that she knows someone from his building and they said Rich moved out. Rich says her friend is mistaken.

Ethan pays Ty a visit and informs him that they can’t rob his Uncle Spence’s house, someone got killed last time and they don’t want that to happen again. Ethan says he met a special girl and he doesn’t want to ruin it, and their friends Jason and Carter both got accepted to college. Ty says he is in love with a girl too and they need to rob Spence’s house so that he can rescue Carmen and be her hero.

Zoila calls Henry to see if he is a match for Genevieve’s kidney, even though she specifically told Zoila and Remi she didn’t want her family to know. Zoila is shocked when Genevieve’s Mom shows up on her doorstep, but not as shocked as Genevieve.

Carmen, Zoila, and Rosie head out to dinner together. They happen to be seated next to Molly, Marisol’s new nurse. Molly is sitting with her friends and telling them all about Molly and Nick’s relationship and how much scotch she drinks and she even snuck in and read Marisol’s book that no one has seen yet. Zoila pays Marisol a visit and tells her that her new nurse isn’t very loyal.

Valentina catches Adrian eating his feelings. He says that Evelyn is sleeping with another man, and he has “lost all of his dignity.” Valentina gives him a pep talk and tells him he should fight for Evelyn, and she encourages him to take up praying and ask God for guidance.

Rich is sitting on the couch watching Rosie clean, she asks him when his apartment will be done being painted. The doorbell interrupts, and it is Dr. Sanders, the man that Dee Dee was cheating on Kenneth with. Rich throws him out and Rosie confesses to him that Dee Dee was having an affair with Dr. Sanders, but reassures him that it is over now.

Remy and Genevieve sit down for an awkward dinner with her Mom. She reveals that Genevieve is a phony and her real name is Eunis Mudge; then she takes her false teeth out to get corn out of them. Disgusted, Genevieve storms out and orders Zoila to get rid of her Mom.

Marisol calls Molly out about snooping through her book and gossiping about her. Molly informs her she is a hypocrite, she wrote an entire book about people she used to work for. Marisol admits she is a hypocrite, but she is going to have Molly sign a confidentiality contract.

Kenneth finds a letter in his stack of mail, he is devastated when he is practicing his reading and realizes the letter is from Dr. Sanders informing him that Dee Dee was cheating on him.

Evelyn, Adrian, and Tony pay Marisol a visit and bring her flowers since they heard about Nick’s accident. Adrian catches Molly looking at Tony funny and corners her and asks her how she knows him. Molly says that when she knew Tony, his name wasn’t Tony.

Later that evening, Tony is on the phone in his room; he tells whoever is on the other line that there has been a change of plans because Adrian found out about the affair. He says he is, “counting down the minutes until he can dump that bitch.”

Zoila corners Genevieve’s Mom and tries to convince her to go home because Genevieve needs her rest. Her Mom gives her a speech about how hard it was for her to be a single mother in the 1950’s and how ungrateful Genevieve is for everything she did for her. She says if Genevieve wants her to leave, she can tell her herself. Zoila heads back to Genevieve’s room and lectures her about the 5th commandment and honoring her mother. She reminds her that her Mom isn’t going to be around forever and she should try to have a relationship with her.

Rosie comes home and finds Dee Dee balling her eyes out in the living-room with Rich and a few lawyers. Rich says that Kenneth told him to throw Dee Dee out because she signed a pre-nup claiming she wouldn’t cheat on him. Rich heads back in the living-room and Rosie finds stationary laying in his brief-case, the same stationary that was used on the letter Kenneth got from Dr. Sanders. She puts two and two together and realizes that Rich wrote the letter to expose Dee Dee’s affair.

Spence’s house is full of a couple dozen of his co-workers form his soap, they are all milling around at his anniversary party. Ty shows up and says that he is just picking up his text book and heads to his room. Outside, Ethan and his two friends put on their ski masks and prepare to head into the house. While Carmen is cutting the cake, three masked men barge in with guns. Ethan takes Carmen hostage, before TY can be the hero and save her, Carmen stabs Ethan in the leg with the cake knife. Ethan’s friends drag him out of the house and they make their getaway.

While the police are searching the crime scene, Rosie arrives to check on Carmen and make sure she is okay. Valentina finds Ethan outside bleeding and nearly unconscious when she is taking out the trash.